Trying To Keep The Lid On

Joe Biden's campaign for President is desperately trying to keep the lid on his run for the Presidency in light of the revelations about the contents of his son's computer hard drive.

Big Media and Big Tech are doing their best to censor the story but it sounds like more stories will be coming out in the coming days leading up to Thursday night's debate.

Thus far, only one reporter covering the campaign has asked Biden about his reaction to the story.

Joe Biden did not take kindly to the question.

This is a tweet from the CBS Reporter that asked the question. 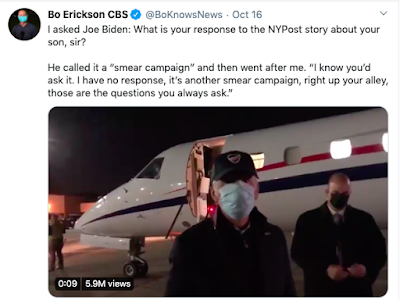 Below is more typical of the "tough"questions that Biden gets on the campaign trail.

This is the question that was asked of Biden today when he stopped for a milk shake at a Cook Out  in Durham, NC.

"What flavor did you get?" 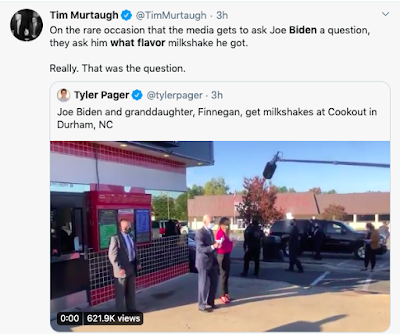 Yeah, that would be the question I would ask if I was a reporter. and had only one I could ask.

Possibly one of the biggest political scandals in recent history, with far-reaching national security consequences and repercussions, and the media want to know what flavor milk shake Biden got?

Right after the North Carolina visit today Biden returned to Delaware and his campaign immediately put a lid on any further public appearances until the Thursday night debate. 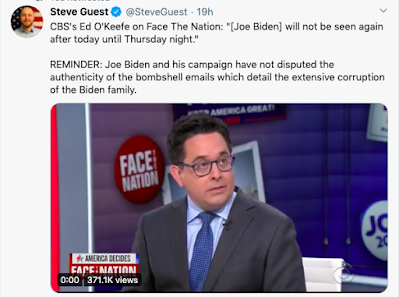 Let's put this in perspective.

We are two weeks from the national election.

One of the candidates is going to spend the next four days in his basement?

This is a strange way to demonstrate to the American people that Joe Biden really wants the job. More importantly, it should raise significant questions about whether Biden is capable of fulfilling the duties of the office.

When have we seen anything that approaches something like this in modern American politics?

He is scheduled for two rallies in Arizona tomorrow.

He is Pennsylvania on Tuesday and North Carolina on Wednesday.

Trump will probably add more events to his schedule in the next day or so.

Biden is clearly very afraid of contracting the virus at his age and the effects it would have on his campaign.

This has taken on even greater importance since Trump came down with Covid and recovered so quickly.

If Biden caught the virus now with all his mask wearing and social distancing it would also do serious damage to the narrative around "following the science".

You also have to ask the question how is he going to lead the country, if elected, if he is unwilling to get out and about? Is he not going to leave the White House until the virus goes away?

Biden is leading in the polls so his advisors also want to limit the risk he might have a major gaffe on the campaign trail. I get it.

The campaign is gambling each and every time they put Joe in front of a microphone even if he is reading off of a teleprompter the size of the screen at a drive-in movie theatre. 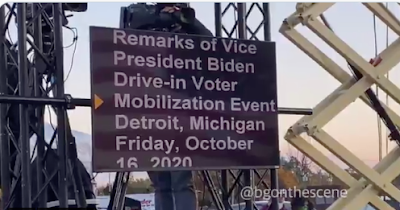 For example, look at Biden reading his script in Detroit on Friday and ask yourself if there is something off here?

He even mispronounces the name of his running mate. 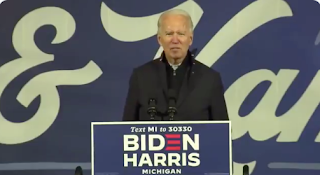 https://twitter.com/i/status/1317308633210761217
How in the world can we expect this man to represent us in negotiations with China, North Korea or Iran?
How can we rely on him to really do what is necessary to get the economy going as we battle the effects of Covid?
How is he going to be to able to navigate the risks of trillions of dollars of new debt and also meet the expectations of liberal Democrats who want to spend trillions on national health care or the Green New Deal?

These are dangerous and challenging times.

When the chips are down you want to have the strongest hand you can leading your efforts.

Joe Biden is also trying to keep the lid on because I am sure he does not know how to answer the questions about his son and his involvement with him in his business interests.

A big part of Biden's dilemma right now is that he foolishly told the American people that he never spoke to his son about his foreign business interests and he did not know anything about what he was doing for his money.

That is simply not believable.

He is also trapped now with evidence in emails contradicting that claim. Undoubtedly, the campaign  would like to claim the emails are inauthentic or are part of a Russian disinformation campaign. However, there are too many other parties named in the emails that can be used to verify their authenticity.

You also have the matter of the alleged 20,000 photos on the hard drive of Hunter, some of which are said to include numerous explicit photos. The Russians are good but could they create and doctor thousands of personal photos of Hunter?

The emails and text messages on that hard drive also indicate that Biden very well could have been using his son as a front man to profit from those business interests. One of those deals was with a company that was an arm of Chinese communists. 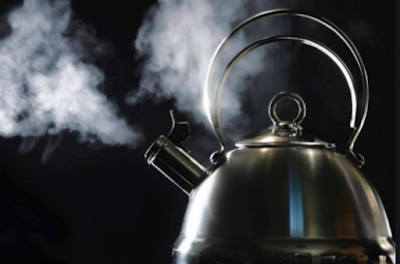 Biden is going to need a full four days to figure out how he is going to answer the questions that are likely to surface.

It is not easy keeping the lid on when the water is boiling this hot.

We will see if Joe Biden can do it with the help of his compatriots in Big Media and Big Tech.