If you get your news from the mainstream media, Facebook and Twitter you may be unaware of the story that The New York Post broke yesterday. 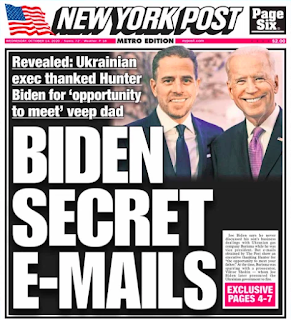 It seems as if they have come into possession of a laptop's hard drive that was allegedly owned by Hunter Biden and was dropped off for repairs last year at a Wilmington, Delaware computer shop. However, the laptop was never reclaimed and became the property of the shop owner because the repair bill was never paid.

The story is that, contrary to the denials that Joe Biden has made many times that he knew nothing about the work that his son Hunter Biden was involved with, the former VP seems to have been involved with his son's influence peddling.

The first Post story seems to show that VP Biden went to a meeting with a high level official in the Ukraine gas company that Hunter got millions to serve on its board of directors. The second Post story outlines a venture with a business which was an arm of the Chinese Communist Party in which it appears that Hunter was actually holding a silent investment interest for Joe Biden.

You might not be aware of the stories because most media outlets are not even recognizing they exist.

For example, here are the major headline stories in today's "The Morning" summary I get delivered from The New York Times to my email.

There is not one mention of the Hunter Biden story in the entire summary of current news. 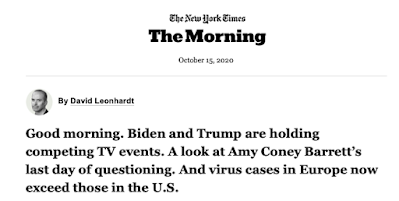 Twitter locked accounts of those who attempted to link to the story. This included White House Press Secretary Kayleigh McEnany. 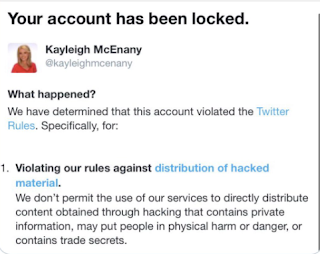 Twitter stated that the story violated their rules regarding the distribution of hacked materials.

However, the material was not hacked. It was legally obtained.

Compare Twitter's stance here with what it has done with all of the stories about Trump including the recent story about his tax returns. Any tax returns involved in that story were definitely obtained illegally. You can say the same thing about the Russia collusion hoax that started and was funded by the Hillary Clinton campaign and was largely based on the discredited Steele dossier.

You will also not find any mention of the story on CNN's website either. 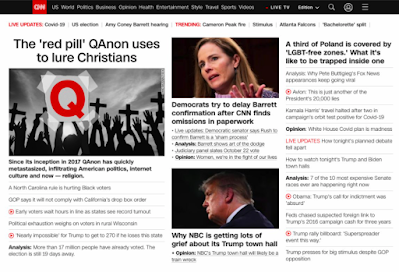 It is certainly a possibility that this reporting could turn out to be false. However, if true, these emails suggest that Joe Biden was involved in covert and corrupt activities involving the use of his office to enrich himself and his family.

When you consider that President Trump was impeached for supposedly asking the President of Ukraine about any possible illegal activities that might have occurred during the Obama/Biden years, doesn't something like this at least require some news organizations acknowledging this as a story that needs more investigation?

To try to block, censor and bury this story should deeply trouble any American concerned about a free and truthful press. The hypocrisy and double standard between how such stories are handled between Donald Trump and Joe Biden tells you all you need to know about how corrupt Big Tech and Big Media have become in this country.

I also find it interesting that throughout all of the questions that have arisen about Hunter Biden over the last year that Joe Biden has always stated that he knew nothing about what his son was doing and never talked to him about his business activities.

Biden has also maintained that there was never a hint of impropriety in anything that Hunter did.

You are the Vice President of the United States and charged with being the point man in the administration with Ukraine and China. Your son is involved in lucrative business deals in both countries and you suggest you know nothing about what your son is doing for that money? You further say there is nothing improper? How did Biden even know that if he didn't know what his son was doing?

Two things have really jumped out at me in the stories I have seen thus far about the Hunter Biden emails.

The second New York Post story details an equity deal with the communists in China where it is discussed how the equity shares will be split in a deal.

This deal was discussed in 2017 so it is after Biden left office as VP. However, if Biden thought everything was above board why would Hunter have to hold the equity interest for him? In addition, this seems to indicate that Joe (the "big guy"?) actually knew a lot more about Hunter's business interests than he has told anyone.

In another email Hunter Biden refers to an earlier agreement in which Biden's son was to receive $10 million annually "for introductions alone". Introductions to who?

Biden wrote that Ye had sweetened the terms of an earlier, three-year consulting contract with CEFC that was to pay him $10 million annually “for introductions alone.”

The other interesting thing that has been disclosed about Hunter's hard drive is this text message that Rudy Giuliani says was found on the device.

This is a screen shot of a text message from Hunter Biden to his 26-year old daughter Naomi.

Hunter seems to be frustrated with the lack of respect he has gotten within the family. He seems to feel under appreciated for what he has done for the family over the years.

He points to what he has done and the fact that he has paid for everything for the entire family for 30 years.

He tells his daughter that it is her turn  to do some heavy lifting next and take care of the family.

Look at the last line in the text. I find that really interesting.

"But don't worry unlike Pop I won't make you give me half your salary."

Pop is the name that all of the Biden grandchildren use to refer to Joe Biden.

It appears that Hunter is saying that he has been the front man cashing in on the Biden name for 30 years and having to spread the money around to the family.

Most importantly, this text message seems to indicate that Joe wanted half of whatever Hunter brought in. After all, he was profiting off of his father, why wouldn't Joe want his share?

Again, I don't know if this is true but this text message does have an air of authenticity to it.

A fatal weakness in most politicians is that they live a rarefied life among the rich and privileged due to their political standing.

They see the wealth surrounding them and begin to believe they are entitled to it as well.

It gnaws at them that they have all this power but are so poorly compensated for the work that they do.

They see it as unfair.

If their big donors have it, why shouldn't they have it as well?

Joe Biden spent 47 years in Washington claiming he was just middle class Joe. He always played up the fact that he commuted to Washington daily while he was in the Senate so he could be home with his family at night.

Did you ever see the home that he went back to?

This is the house that Joe Biden purchased in 1974 when he was 32 years old and in his second year in the U.S. Senate.

Look at that house and the surrounding property and tell me how you could even heat it, insure it and maintain it on that type of income let alone pay the mortgage on $40K per year.

That is not a house. It is former mansion of the DuPont family which was one of the richest families in the United States.

Right after Biden left the Vice Presidency he purchased this beach house in Rehoboth Beach, Delaware for $2.7 million.

I have always found it curious as to how so many politicians can spend a lifetime in public service but end their careers as multi-millionaires.

There seems to be no better example than Joe Biden who started in the Senate at age 30 and literally spent his entire career working in Washington and supposedly never earning more than $230,000 per year.

Ask yourself how likely it is that he would allow his son, his brother and other family members to make tens of millions of dollars over the years from the Biden name and not expect a cut for himself?

That is particularly the case when you look at Joe's taste in real estate.

I don't know if the Hunter Biden emails and texts are authentic but I do know when I look at everything here that something does not add up. All I have to do is apply the smallest amount of common sense and alarm bells are going off.

However, when have you ever heard any member of the media question Biden about any of this?

I have plenty of questions. One of them is how has Joe Biden gotten this far in a Presidential campaign and not had to answer any hard questions on this subject.

What do you think?

Isn't it time for the hypocrisy and double standard of Big Tech and Big Media to cease?

Ask yourself this questions as well...

How will that ever occur if the Democrats are totally in power?

If you want some more information on Joe Biden's financial history I suggest you read the blog post I wrote earlier this year on Biden's tax returns.