How Much Can We Trust The Polls?

How much can we trust the polls?

That is a question I hear often.

It is a common question today in that so many people believed that the polls misled them about predicting the outcome of the 2016 Presidential elections.

Who can forget this prediction of the New York Times that was based on polling data that gave Hillary Clinton a 93% probability of winning the election as of October 23, 2016. Trump's odds had improved to 15% as of the day before the election.

I am very interested in polls because I love data. Polls are the only real data that one can look at to get a sense of where a political race stands at a point in time.

Of course, polls have several limitations.

Second, polls are always subject to the assumptions that are made by the pollsters. They have to assume what the actual turnout for the election will be over various demographic groups for the poll to be accurate. How many registered Republicans, Democrats or Independents will actually vote? How many women? Men? Young people? Senior Citizens? Blacks? Whites? Hispanics? If the pollster makes a mistake on their assumptions in this regard the poll results will be flawed

Third, you have to remember that polls are paid for by someone. Whoever is doing the survey has to keep that in mind. If the New York Times or NBC is paying for a poll do you think the pollster is going to keep the client happy if the polls show a Republican is winning? Therefore, the survey firms that do this work have to keep their paying client happy but also need to be concerned about their accuracy in the end. That is why you usually see polls get tighter toward the end of most political races. Earlier polls are for the client. The last polls are critical to the credibility of the pollster to get work in the future.

Recent polls show that Joe Biden has widened his lead over President Trump that have been released since the first Presidential debate and the President's Covid-19 diagnosis.

The Real Clear Politics average for today shows Biden up by +9.7 over Trump.

Let's put that number in perspective with other Democrat victories in the past.

Jimmy Carter only beat Gerald Ford by 2 points and that was after Ford pardoned Richard Nixon.

Franklin D. Roosevelt only beat Thomas Dewey by 7.5 points in 1944 and that was in the middle of World War II in which FDR was the verge of leading the USA to victory in World War II.

This goes to show just how far out there a +16 margin would be.

How does CNN get such a result?

They assume that Democrats will have a +10 turnout advantage at the polls.

The poll shows that women support Biden 66%-32% over Trump.

How do these numbers compare to 2016 based on CNN's exit poll?

Democrats only had a 3 point advantage in turnout in 2016.

If all of these things occur, Trump is undoubtedly going to lose in a landslide of epic proportions. There is simply no way Trump can win if he loses women by 30 points and he does not get majority support of those over age 65.

However, take a step back and ask yourself if any of this is consistent with what you see around you on a day to day basis.

As I have written before, I do not personally know anyone who told me they voted for Trump last time that regrets their vote and is going to vote for Biden this time. I also knew a fair number of people who swallowed hard and voted for Trump even though they had a lot of reservations about him. Every one of them has told me Trump has exceeded their expectations

Conversely, I know people who were never Trumpers in 2016 who will enthusiastically vote for him in 2020 because of what he has done as President.

Yes, I know all of my observations are anecdotal but we have continued to see unprecedented enthusiasm for Trump in his rallies over the entire 4 years and it is hard to see where there is any enthusiasm for Biden at all.

Further, Republican registrations are up compared to Democrats in many important battleground states. 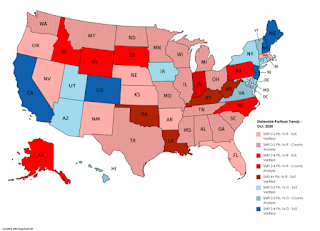 This yard sign seems to sum up the sentiments of many Biden voters. 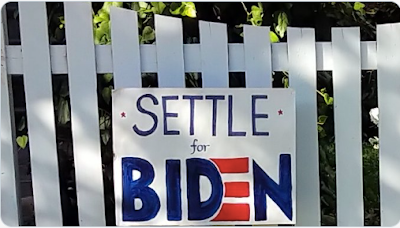 I know "hate" is a powerful motivator and many voters are voting against Trump rather for Biden.

Here is an example of someone seems like that at a home I drive by often.

If you can't read the yard signs in the image below they read...

"And one day like a miracle he'll be gone."

These people seem to put up a new sign every day. They also have a standard Biden/Harris sign in their yard which I simply could not get in the shot.

This Biden supporter does not appear to know that Joe Biden received five draft deferments during the Vietnam War as well. He received a medical deferment for an asthma condition he had as a teenager. Trump received a deferment for bone spurs.

This is the same Joe Biden who has bragged about his summers spent as a lifeguard at a Delaware swimming pool where he said he faced down local gang leader "Corn Pop" by telling him that he would put a chain around the man's neck. Yes, "Corn Pop" was an African American. No one could really make up the stuff that sometimes comes out of Biden's mouth.

And while we are talking about truth, Joe Biden is also the guy who has said he will ban fracking to one group and says he won't ban it to another. He also will not say whether he would support packing the Supreme Court if he wins because he doesn't want it to become an issue and distraction in the campaign.

Didn't the Democrats already make it an issue by suggesting they wanted to do it? As Joe is the "head of the Democrat party" shouldn't he be truthful about his position on the issue?

When people make decisions like this on emotions rather than facts, the result is usually a poor decision.

When there are voters out there like this it is clear anything can happen. However, is disliking someone enough to get someone to the polls over someone who really likes a candidate?

On the other side of the CNN poll is a survey that was published by the Democracy Institute which is  sponsored by London's Sunday Express. The pollsters behind this survey correctly forecast both Trump's 2106 win as well as the Brexit vote.

The most recent poll released by the Democracy Institute last Sunday put Trump up 46%-45% over Biden. That poll assumes a 2 point sample advantage for Democrats instead of the 10 points in the CNN poll.

This poll also shows Trump up by an aggregate of 4 points in the battleground states of Florida, Pennsylvania, North Carolina, Michigan, Minnesota and New Hampshire.

As to my point above on enthusiasm this poll found that 83% of Trump voters were enthusiastic about their choice compared to 49% for Biden voters. Will Biden voters really show up to vote (or vote by mail) in this election? Turnout is always crucial but it is going to be especially important in the Covid world we live in today.

That is an astounding difference and I think all of us can understand where that is coming from. How many people do you know who are willing to put a Trump bumper sticker on their car or a yard sign up considering what we see going in our society today?

One of the questions that is still vexing pollsters in this election is trying to determine how many "shy" Trump voters there are. In other words, those voters who are not going to talk about it but are going to vote for Trump in the end.

The Trafalgar Group had some of the most accurate polling in 2016 and a lot of it was attributed to the fact that they asked the following question in their surveys to try to find out what voters were really thinking.

Therefore, they asked this additional question.

"Who do you think your neighbors are supporting for President?"

Other pollsters are now asking the same question this election cycle.

For example, here are the results from the most recent Fox News poll to that question.

This would have Trump up by 11 points which is more than double his margin in August.

However, the actual polling of voters, when asked how they will vote, shows Biden leading Trump 53%-43%.
Go figure.
How much can we trust the polls?
I don't have a lot of trust in what I am seeing right now.
It would be hard to argue that Joe Biden is not leading when you look at the data from so many national polls.
However, in the battleground states right now, Trump is down 4.6 points in the RCP average. He was down 5.1 points at the same time in 2016.
The only poll that counts is still 25 days away. That is still a lifetime away based on what may still transpire in 2020.
Posted by BeeLine at 10:36 PM