The Lifeblood of Politics

Money is the lifeblood of politics.

The power that politicians have largely involves the influence that they have over what goes in and comes out of someone's pocketbook.

It is that power that also motivates most political contributions.

Under the tax law, a gift is usually defined as the proceeds of "detached and disinterested generosity". The motivation for gifts are "affection, respect, admiration, charity or like impulses". A true gift is given with no expectation of getting anything back in return.

The reality of political contributions is that there is a usually an inverse relationship between the amount of the contribution to a candidate and the degree to which the donor is "detached and disinterested".

Simply stated, as the dollars contributed to a political candidate increases the motivation for giving starts to tilt more to an interest in influence than affection and admiration for the candidate.

With this as background I thought it would be interesting to look at the 2020 Presidential Campaign Finance reports of Donald Trump and Joe Biden to give you an idea of the trail of money from donor to candidate.

All of the data and charts are from OpenSecrets.org based on the most recent Federal Elections Commission (FEC) filings.

Donald Trump has only raised about 60% of the money that Joe Biden has. This is similar to his money situation against Hillary Clinton where he only raised 56% of her total

To provide some perspective on how much more money as been raised in 2020 vs. 2016, consider that Biden has collected 80% more than Hillary and Trump is up 98% compared to the last election.

Bear in mind, these are not the final 2020 numbers either. I would expect that both candidates will have more than doubled the amount raised (and spent) from four years ago when the final numbers are tallied.

Where is the money coming from?

The FEC limits individuals from contributing no more than $2,800 per election. An individual may contribute $2,800 for both the primary and general election meaning that someone can contribute $5,600 to any one candidate in an election cycle.

A popular narrative is that the GOP is funded by wealthy "fat cats". It seems there are a lot more Democrat "fat cats" than Republicans.

Where do these people live?

These are the top metro areas where Biden has raised his campaign committee contributions.

These are the top zip codes where the money has come from.

Do you notice anything? 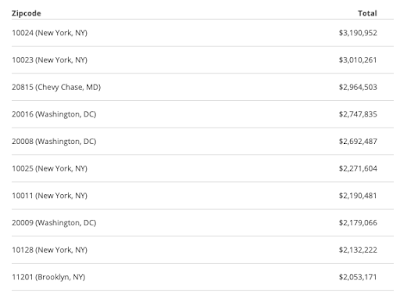 Here is where Trump's campaign contributions have come from.

Do you notice how much more diverse the geography of Trump's donors is as well as the fact that it is not so concentrated in such big dollars from the New York and Washington metro areas?

In fact, Biden has gotten almost as much money from his top two zip codes in New York City as Trump has raised in total from his top 10 zip codes that are from all over the country. 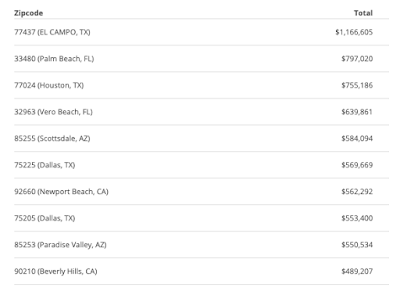 Which industries and occupations are involved in funding the combined campaign committee and outside groups supporting the candidates? 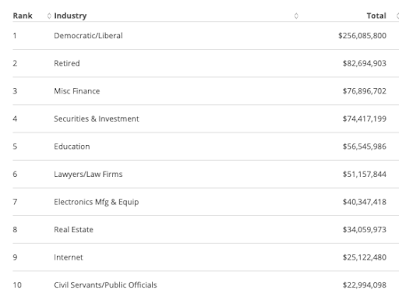 Trump's biggest group contributing to him are people who are retired. Trump has raised twice as much money from retirees as Biden. Trump has also gotten only about one-fifth of the money from ideological groups as Biden has. 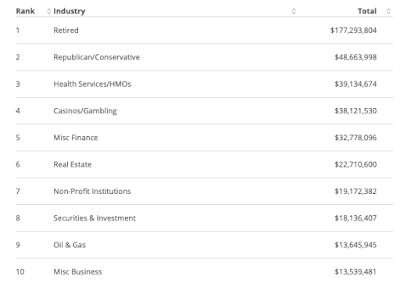 Which companies or organizations are the individuals who donated to each candidate's campaign committee associated with?

Joe Biden has a lot of supporters at Alphabet (Google) and those who were in the University of California system. Stanford University is also in the Top 10.  Apple, Amazon , Facebook and Microsoft are near the top as well.

Do you think a Biden administration would spend much time looking into anti-trust and other possible abuses with these tech companies? 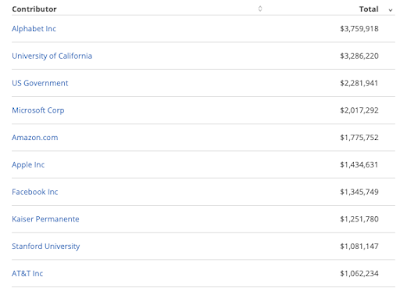 Here are the top industries and organizations associated with those who have contributed to Trump.
Look not only at the composition of the contributors but the amounts given.
Employees of the US Postal Service are second on the Trump list having contributed $416, 374 according to this list. However, UPS employees have contributed about the same sum to Biden but that is not enough to even get close to the top 20 on Biden's list.
UPS employees also donated over $450,000 to Bernie Sanders just in the Democrat primary race. 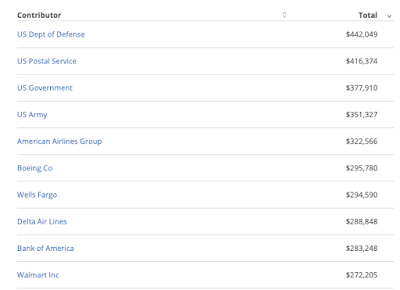 Joe Biden and Donald Trump both understand the influence of money in politics very well.

Trump has spoken about it many times. It is the reason that he initially funded his campaign for President when he first ran. He still talks in his rallies why he does not try to raise a lot of money from Wall Street. He knows that strings are always attached when it comes to political contributions.

Trump knows how the system works. He was on the other side for most of his life. He made a lot of campaign contributions and most of them were to Democrats. He understood that if he was going to do business in New York City it was the only way he could play.

Joe Biden also understands it very well. All you have to do to know that is to see what is coming off of his son's laptop. Or look at what is revealed in the emails or testimony of Tony Bobulinski.

If you understand where the money is coming from in a candidate's campaign you are going to have a much better idea of how they will govern, who they will favor and who they will not.

I am not saying that there is anything necessarily illegal about any of this. However, any elected official only has so much time and so much they can do in that time.

They have to make choices about who they see, which phone calls they return and which particular requests they are willing to work on.

When I worked a lot in Washington a Capitol Hill staffer explained it to me this way as we walked into his office one day. This was at a time when phone messages were still given to you on pink slips which one of the assistants gave to him as he walked into the office. 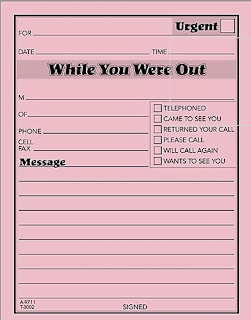 This is what he told me as he looked through the stack of phone messages on those pink slips.
We care about anyone who calls our office and wants to talk to us or wants us to weigh in on an issue. However, we get 10 times the amount of the phone calls that we can handle.

When I come back to the office after being out somewhere on the Hill I might have 50 calls to return. I only have time for 5 if I want to spend any time with my family. Which 5 of those am I going to call back?

I am not going to make that decision simply based on who called first or randomly going through these pink messages. My attention is first going to those people who have supported us in the past. You can say it is not fair but the bottom line is that we know we would not be here but for that support. And we won't be here next term without those who support us again
That is just the way it works.

Money is the lifeblood of politics.
Now you have a better understanding of who is donating at the blood bank for these two candidates.
Posted by BeeLine at 9:39 PM