There is a lot of bleak news about Covid in the news these days.

Tests are also up.

This chart shows that cases are largely following the trend in tests. However, you can see that the summer months undoubtedly inhibited the transmission of the virus. All respiratory viruses are seasonal and as we enter the winter months this undoubtedly has a lot to do with this wave in the virus.

Adjusted for testing increases, this chart suggests that the current wave is still less severe than what we saw last Spring at this point.

We are now approaching 2 million tests being administered each day.

This chart gives you some context to show how testing in the United States compares to some other major countries. The U.S. and U.K. are testing far more per capita than almost anywhere else in the world. That carries additional emphasis in the U.S. since the U.S. population is so much larger and geographically diverse than the U.K.

Bear in mind that Joe Biden and his experts claim that the main solution to the problem is "more testing" needs to be done.

Deaths have also risen with the recent wave but they still are not at the level we saw last April even though about 6 times the number of confirmed cases are being reported as there were last Spring.

All of this bleak Covid case data has resulted in another round of bleak news  regarding economic lockdowns, further quarantine orders and school closures.

Some of the measures seem to be particularly bleak in the message they send.

In Oregon, the Governor wants residents to call the police to report neighbors who may be violating her order that no more than six people can gather in a single household. This is the same governor who has been sympathetic in the people in her state who want to defund the police.

In Nevada, you now need a reservation to go to a fast food restaurant.

In New Mexico, they have actually shut down grocery stores for two weeks who have had more than four rapid response positive tests within a 14-day period.

It is bleak indeed.

However, the bleakest news the last couple of weeks has been for the experts who claimed that all of these measures we have had to take were due to the "science".

Let's look at some interesting developments in that regard that have been published in scientific papers I have come across in the last couple of weeks.

Let's consider deaths first. Every day we hear the count of Covid deaths.

A recent paper that was published by Genevieve Briand, who is assistant program director of the Applied Economics master's degree program at Johns Hopkins University, takes a detailed look at the CDC death statistics. That study indicates that there have been no overall increases in deaths in the United States since the Covid pandemic began nor has there been any change in the percentage of deaths of any age group.

(Go to this archived link if the article in the Johns Hopkins Newsletter no longer exists. After writing this, I found that JHU may have taken this article down. I wonder why?)

The narrative you hear in the news would suggest that we would be showing an increasing percentage of deaths particularly in those who are older. However, that is not shown in the CDC data according to Briand. 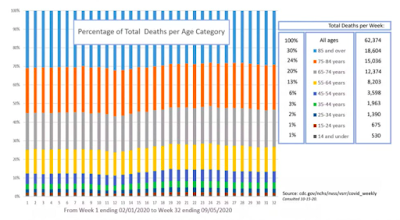 Surprisingly, the deaths of older people stayed the same before and after COVID-19. Since COVID-19 mainly affects the elderly, experts expected an increase in the percentage of deaths in older age groups. However, this increase is not seen from the CDC data. In fact, the percentages of deaths among all age groups remain relatively the same.

Briand also noted that 50,000 to 70,000 deaths are seen both before and after COVID-19, indicating that this number of deaths was normal long before COVID-19 emerged. Therefore, according to Briand, not only has COVID-19 had no effect on the percentage of deaths of older people, but it has also not increased the total number of deaths.

These data analyses suggest that in contrast to most people’s assumptions, the number of deaths by COVID-19 is not alarming. In fact, it has relatively no effect on deaths in the United States.

How could there be relatively no effect on overall deaths in the United States if we are told we have  tens of thousands of Covid deaths?

It appears that as Covid deaths went up other deaths decreased by almost identical amounts.

For example, look at this chart that shows the period in April when Covid deaths were the highest.

Notice how as Covid deaths increased that deaths due to other causes dropped (heart disease, cancer, diabetes, flu etc) on a week to week basis.

Is it a pandemic if overall deaths over the course of the year remained essentially unchanged?

Another interesting study was recently released that undercuts the narrative that much of the spread of the virus is being caused by asymptomatic and pre-symptomatic cases.

A peer-reviewed study in The Lancet indicates that it is unlikely that Covid-19 is being spread in  asymptomatic and pre-symptomatic individuals.

It also calls into question PCR testing as an effective method in identifying infectious disease. The length of time that viable virus is present in an individual for it to be transmitted to another person is also short-lived (5-9 days) although testing may pick up the virus for longer periods of time. In no case did the study find live virus present beyond 9 days even in cases with high viral loads.

Our study shows that despite evidence of prolonged SARS-CoV-2 RNA shedding in respiratory and stool samples, viable virus appears to be short-lived. Therefore, RNA detection cannot be used to infer infectiousness.

Our study shows that isolation practices should be commenced with the start of first symptoms, which can include mild and atypical symptoms, preceding typical symptoms of COVID-19 such as cough and fever.

In other words, asymptomatic cases are not spreading the virus or are those who are pre-symptomatic. The study indicates that some symptoms (although they may be mild) have to be present in order for the virus to be infectious.

If that is the case then we are back where we were in January where Michael Osterholm, one of the experts on Joe Biden's Covid task force, made the statement below. This was in response to early reports that Covid could be spread by asymptomatic carriers.

Osterholm stated that in 17 years of working with coronaviruses he knew of no evidence where they were found to be infectious during their incubation period. In other words, you have to have symptoms in order to spread the disease.
Of course, the argument that asymptomatic or presymptomatic cases can spread the virus is the entire basis for telling us that we need to wear face masks.
Osterholm also said this about the mask mandate that was being instituted in Minneapolis at the end of May specifically regarding the cloth masks that most people wear when in public.

In other words, masks have almost no benefit for the general public. In fact, he worried that they might do more harm than good.
Osterholm later changed his tune even though when he made the statement above he was correctly citing all of the best scientific research ever done on the efficacy of masks by the general public in protecting against the spread of an infectious viral disease.
It seems that Osterholm might have been right in May before he became more interested in politics than science.
Here is what has occurred in Minnesota since the various mask mandates were instituted.
How could anyone look at this data and suggest that masks worked in inhibiting the spread of the virus? 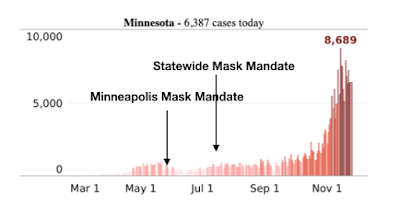 On the subject of masks, we also have the recently released study from Denmark reported in the Annals of Internal Medicine that is the most comprehensive, randomized trial on the use of masks since the Covid-19 outbreak began.
The study involved approximately 6,000 participants half of which were given 50 high quality surgical masks to wear during the course of the trial. This allowed the participants to use a new mask at least once day and dispose of the used masks. Note that this would be far superior protection compared to what we would expect with those who are wearing cloths masks and reusing them for days on end.
1.8% of those who wore the masks were found to have contracted the virus at the end of the trial period. 2.1% of those in the control group who did not wear masks contracted the virus.
In fact, those who wore the masks in the study all the time "exactly as instructed", had an infection rate of 2.0% which was higher than those who wore the masks "most of the time".
In other words, there was almost no difference in infection rates between those who wore masks and those with no masks in the study. You can make an argument that there might be small benefit from masks in looking at the data. However, the authors of the study stated that the reality of the statistical intervals based on the samples sizes in the trial suggested that one could actually conclude that wearing masks might actually be riskier than no masks.
It should be noted that when the trial began the authors were hoping to show at least a 50% reduction in infection rates due to mask usage. The trial did not come close to showing that result.
So that everyone understands how political the issues of mask usage has become, it took the authors of this study almost three months to get this study published as it was not considered "politically correct".
Additional studies may come to different results in the coming months. However, as I have suggested before, the science is far from settled with Covid-19. These new studies confirm that again.
At this point there is nothing in the science, facts or data to justify any mandates, business or school closures or anything else. It certainly should not be done by executive orders. If anyone believes that rights and liberties need to be curtailed let that be done by legislation.
Politicians and others who are trying to hide behind claims of "science" are doing the public a great disservice with their claims of certainty on how to combat the virus as well as not putting all of this in the proper context.
Models, theories and opinions are not reality. They are also not "science" even if someone tries to convince you they are.
How many months have passed when we were told if we do this or that it will all pass?
In the meantime, how many lives and livelihoods have been destroyed?
How many more are going to be sacrificed before it is over?
If it is bleak it is because most of the so-called experts and politicians don't have a bleeping idea of what they are doing.
Posted by BeeLine at 10:01 PM