All of it was so predictable.

I am no prophet but I accurately forecasted exactly where we are right now in August in a blog post entitled, "Magnets for Fraud".

Our voting systems are not set up to handle volumes of ballots that are mailed in. All the systems (voting machines, poll workers etc) have been established for in-person voting where collecting and counting the votes is done with automated machines and identities can be checked (where voter ID is permitted) by poll workers. Even if voter ID is not required in a state, in-person voting requires a real person to show up in person at the polls which limits attempts at voter harvesting and other fraudulent acts.

Absentee ballots have also typically made up less than 20% of the ballots in an election year. They were 17.7% of all votes cast in 2016.

Moving to mail-in ballots when the entire voting system and infrastructure is geared to in-person voting is an invitation for fraud every bit in line with the unemployment benefits fraud seen in Ohio this year.

To insure the integrity of the election it would be necessary to have scores of people opening the mail, tabulating results and verifying signatures and voter id's against the registration rolls. It would be many times more laborious than the current system and require more time.

It would also almost guarantee that we would not have election results for days or weeks after the election day.

Mail-in voting (or something more sophisticated technologically) is something that may make sense in the future.

However, it must be accompanied by changes in the systems and election infrastructure that have been developed to service in-person voting over a period of years. It is not realistic that it could be changed in a matter of a couple of months without confusion and chaos occurring. I can think of nothing worse happening in a year when the integrity of the vote is so important to gain public trust.

One requirement that I believe is absolutely necessary in mail-in voting is that the votes must be in hand at the Elections Board by election day. Voters deserve to know the final results on election day and not days or weeks later as we have seen in some of the mail-in states like California and New York where ballots are coming in days after the elections. Allowing votes to come in and be counted after initial results have been tabulated is another invitation for fraud.

Recounts may be conducted but they are not intended to uncover fraud in voting. A recount is merely intended to make sure that the votes were correctly tabulated.

A recount is not going to tell you if the vote itself was legitimate.

Was the vote cast by a U.S citizen?

Was the vote cast by a legal resident of the state?

Was the registered voter actually the person who cast the vote?

Did the votes of one party never get put into the system?

Was one party allowed to cure errors in mail-in ballots but it was not allowed by the other party?

Was there some digital manipulation of the voting machine tabulation system?

In order for President Trump to have any chance at prevailing it appears that some evidence of suspected systemic fraud must be produced.

That is not easy to prove although there are already instances where everything that I have cited above has occurred somewhere in the battleground states.

Short of a miracle, I just don't see where that evidence is going to come from.

The other problem is that in a situation like this possession is 99% of the law. The votes are on the record for Biden. It is a high burden to overcome that unless there is compelling evidence of real fraud. It would take a lot for a judge or state legislator to throw out votes that are already on the record no matter how illegitimate they may be.

Some in the Republican party are suggesting that President Trump should graciously concede defeat and make plans for the transition of power. That would be good advice if there was no evidence of fraud. I don't know the specifics of what the Trump campaign may have in that regard.

However, if they have any reasonable basis that fraud was involved Trump should not concede an inch. It would be a disservice to the 70 million people who voted for him and it would also be negligent to not confront any evidence of fraud as election integrity is the foundation of our entire government system. Without it, nothing is legitimate.

I have written before about some of the voting numbers that come out of inner city precincts.

The numbers themselves suggest fraud for no other reason that it is hard to imagine that in any human endeavor on any subject you could find this much unanimity on any subject or issue.

For example, consider these vote totals for six inner city voting precincts in Cincinnati, Ohio in the 2016 Presidential election between Barack Obama and Mitt Romney.

You would think that with this many ballots you would have more people mark the ballot incorrectly for Romney by error than the number of votes he actually received.

I wrote at that time that this might not represent voting fraud but it makes you wonder how one demographic group can have their vote almost totally defined by race.

You don't see anything like this with any other demographic group.

I compared that vote with the 2016 vote in Cincinnati's wealthiest suburb, Indian Hill.

Indian Hill is generally considered a bastion of wealthy, white, privileged Republicans in Cincinnati. In fact, the zip code that includes Indian Hill donated more money to Romney than any other in the entire state of Ohio.

What were the vote totals in Indian Hill between Barack Obama and Mitt Romney?

I can understand 71.0%. I don't fathom 99.5%.
I was curious what the vote totals in those six inner city precincts were for Joe Biden.
Here are the votes for 2020 as currently reported with 100% of the vote in. (there will undoubtedly be some minor adjustments before the count is certified).

More significantly, Biden only got 1,895 votes in these precincts compared to the 3,070 that Obama got and the 2,657 that Hillary tallied.
On the other hand, Trump got only 56% of the vote in Indian Hill in 2020 compared to the 71% that Romney received (Trump got 62% in 2012).
Consider the vote totals in Philadelphia as they are being reported as I write this.
Trump received 29% of the election day vote. Biden got 92.4% of the early vote and half the votes were submitted early. When over 9 of every 10 votes being counted after election night are going to one side any electoral margin can be erased quickly.
Comparing the total votes to other years it is hard to make a case that 2020 involved abnormal vote totals in Philadelphia based on what I have seen thus far. However, the early mail-in vote this year has really shown what is going on beneath the surface. In the past these votes got buried in the overall results. This year it was impossible to ignore the effects as so much came in together in mail ballots.
I still can't get over this report that I cited in my last blog post.
23,277 votes for Biden and ZERO for Trump in one batch of votes! 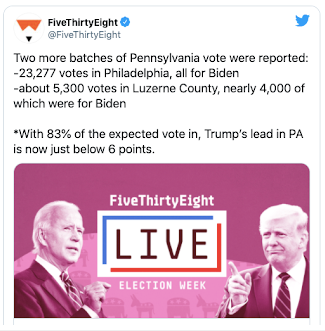 This year raises the additional question as to how anyone could look at the imbalance in early voting numbers and suggest that it benefits the two parties equally.
In fact, isn't it the Democrats who state that the issue is not equality of access or opportunity but of equity? Kamala Harris made this argument just days before election day. She said "equitable treatment means we all end up in the same place." 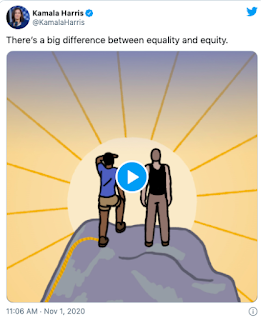 Based on this Marxist thinking, if there is an unequal result there is injustice. The result we have seen with early voting unquestionably fits the definition of injustice under that standard.
Is there any doubt that if early voting numbers were reversed in favor of Republicans that the Democrats would be strongly arguing for its removal?
The larger question is how can a country that spawned Microsoft, Apple, Amazon and other tech giants be grappling with a voting system that people can't trust?
Why should it take days to count ballots in so many critical states?
Why are voter ID laws so vigorously opposed by Democrats?
Why should there be any question whatsoever about the integrity of our elections?
These are questions that need to be answered.
The problem is that the Democrats have no interest in answering them.
The system is clearly working for them. Why would they want to change it?.
It is all so predictable
Posted by BeeLine at 10:19 PM