Smoke and Mirrors or Fire?

There is plenty of smoke in the air in the aftermath of the 2020 election. The question is can anyone find the source of the fire?

An even bigger question is whether there is ANYONE that has the COURAGE to put out the fire if we find it?

There are a lot of claims circulating about the legitimacy of the 2020 election. That is about the worse thing you can have in a constitutional republic where everything needs to be built on a foundation of trust in the voting system. Without that trust, you literally have nothing.

75% of Republicans said it was likely.

Even 30% of Democrats agreed it was likely.

This would suggest that the foundation of our entire system is in serious jeopardy.

That is why I have argued before that it is absolutely necessary to investigate all of the claims of election interference and fraud. In fact, looking at the poll numbers, that is just as true for Joe Biden as it is for Donald Trump.

I don’t know if there was widespread fraud in this election. I see many things that are hard to make sense of. Let’s call it smoke. It remains to be seen if that smoke was caused by an intentionally lit fire.

When I analyze things I try not to get caught up in the weeds. I try to look at the big picture first to put as much of the landscape as I can in perspective
.
Let’s start with that perspective in mind.

When an incumbent is running for re-election, it is generally true that if they can get everyone that voted for them the last time to support them again, they will win.

This is a pretty simple concept to understand.

Let’s look at that concept applied to the 2020 election.

Donald Trump received 63 million popular votes in the 2016 election. Hillary Clinton got 66 million votes. Trump won the electoral vote because Clinton’s entire national vote margin was in California. In the other 49 states Trump had about a 1.5 million vote margin overall.

How many votes does Donald Trump have right now recognizing that counts are still coming in?

In other words, Trump effectively got all of the 63 million voters who supported him the last time and added almost 11 million others.

That is an increase of 17.2% in total votes for the incumbent President.

How does that compare to some other past elections where an incumbent either won (Obama, Clinton) or lost (Carter, George H.W. Bush). 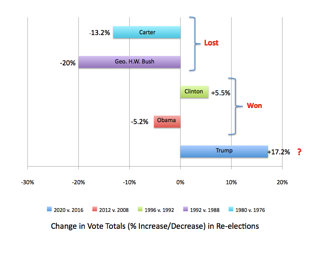 It defies all common sense.

Democrats argue that it is all explained by higher turnout of voters across the board.

There will probably be close to 155 million votes cast in this election when all is said and done.

That compares to 129 million just four years ago.

Joe Biden will surely get to at least 80 million votes.

For context, that is 14 million more than Hillary Clinton received in 2016 and Barack Obama got in 2012.

Where did all of these voters come from?

Some argue that is was a surge of young and first-time voters.

In any event, these numbers still do not explain how total votes cast could have gone up over 20% in just four years.

If we are to believe the Biden vote totals you have to believe that some 15 million people who did vote for Barack Obama or Hillary Clinton somehow decided en masse to vote for a candidate who did not campaign and for whom there was absolutely no enthusiasm for whatsoever.

Again, it defies all common sense.

If any of this can be explained it can only be done by considering the massive increase in mail-in ballots.

It has been reported that 65 million votes were cast by mail in 2020.

As I have written before, mail-in ballots are much more subject to fraud than in person voting. Mail ballots do not require an actual, living and breathing human being to physically show up at a polling place, show an ID (in some states) and sign the voter roll that can then be compared to the registration record signature.

Let’s look at the mail-in vote totals in two states (Georgia and Pennsylvania) that have received attention in this election for possible fraud.

Compare the mail-ballots that were cast in 2020 compared to 2016 in the two states. 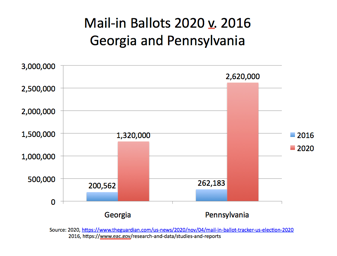 In order to prevent fraud and insure the integrity of the ballot it is critical that safeguards be applied to mail-in ballots in order to be sure that the voter casting the ballot is the same as the person on the voting rolls.

Due to these requirements it is not uncommon to have a fairly high number of rejected mail-in ballots in that voters do not follow the rules which causes ballots to be declared invalid.

This chart from Pew Research shows the percentages of absentee/mail ballots that were declared ineligible in different states in the last two national elections. 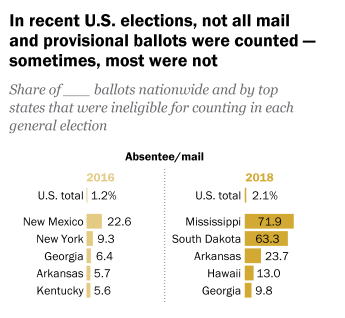 Considering the great number of ballots being submitted by mail for the first time in 2020 wouldn’t you expect the number of rejected ballots to increase?

That would be the logical conclusion.

It is also what U.S. Election Commission predicted would occur in 2020.

These were their exact words.

“It is expected that the rejected ballot percentage will increase in 2020 as more voters are expected to vote by mail, some for the first time.”


How many rejected mail-in ballots have been reported in Georgia out of those 1.3 million votes?

That is 6 times lower than the national average cited in 2016.

It is 320 times lower than the percentage of rejected mail-in ballots Georgia reported in 2016.

All in a year when so many were voting by mail for the first time?

That number defies all reason.

It clearly shows that almost no examinations were done of the mail-in ballots in Georgia before they were accepted.

In Pennsylvania there have been only 1,009 rejected ballots out of 2.6 million cast.

That means that for every 2,577 mail-in ballots that were accepted only one was rejected. That is .03%.
In the 2018 mid-term election in Pennsylvania, 4.4% of absentee ballots were rejected.

How can anyone believe that even the most rudimentary examination of these ballots were done before they were counted?

There are even bigger questions about the legality of the mail-in ballots in these states.

In Georgia, the entire rules regarding the expansion of mail-in ballots in the state were instituted by the Secretary of State earlier this year without any involvement by the state legislature.

This is a major problem as the U.S. Constitution is clear that that federal elections are delegated to the states in rules established by the state legislatures.

In the election for President , Article I, Sec. 2 reads “Each state shall appoint, in such Manner as the Legislature may direct…”

Therefore, under what authority did the Secretary of State have to liberalize the rules for mail-in ballots without having it passed by the state legislature?

This is the basis of one lawsuit filed in Georgia asking for the results of the election be overturned. This was filed by attorney Lin Wood acting on his own behalf and not for the Trump campaign.

In Pennsylvania, there is a similar problem with the liberalized rules on mail-in ballots.

However, in Pennsylvania these new mail-in ballots were approved by the legislature in a bipartisan vote and signed into law by the Governor in 2019.

The problem with this is that the rules with regard to what is an allowable reason for absentee voting is enshrined in the Constitution of Pennsylvania. It limits absentee voting to those things we think of traditionally for such voting (being physically absent from the state or county, having an illness or physical disability etc).

This is also the subject of another lawsuit in Pennsylvania brought by Rep. Mike Kelly and other Republicans in the state claiming that all of the mail-in ballots under the new law were illegally cast.

Some argue that the change in the law regarding absentee voting in Pennsylvania was done in a bipartisan manner so everything should be fine.

Just because something is bipartisan does not make it constitutional.

A lot on how all this is going to turn out will depend on how much COURAGE exists in our state legislatures and our courts. Are there people out there who are willing to act based on what the facts and law tell them to do?
That is a tall order. It is one that probably only the U.S. Supreme Court would be willing to consider.
I don’t know where all of this ends.

I do know a few things.

There is a lot of smoke out there.

Are the Trump attorneys merely using smoke and mirrors to prolong the inevitable or is there a fire raging beneath the surface we need to know about?

There are a few hard and fast dates that loom ahead over the next few weeks.
December 8, 2020—“Safe Harbor Deadline” for states to certify their votes for the electors. If the state has not certified electors by this date the state risks Congress intervening to resolve any potential dispute.

December 14, 2020---Date that the electors from each state votes

This then leads to the date that the votes of the electors are actually revealed in Congress.
January 6, 2020
If no candidate has the required 270 electoral votes it will then be up to the House of Representatives to select the President with each state having one vote.

This evening the Trump campaign announced that any work that Sidney Powell was doing on election fraud was not being done in the name of the campaign.
Much of Powell's work seemed to be involved with the larger issues of voting fraud that might encompass the voting systems and software rather than the issues involving the casting of illegal or illegitimate votes that I have outlined above.
It is unclear why the Trump campaign has distanced itself from Powell's potential lawsuit at this point.
Have they decided that she doesn't have the evidence she claims she has?
Have they determined that it would take too long to prove any claims in this regard in the limited time they have?
Did they simply determine that they could not pursue two very different theories of fraud without diluting their overall efforts?
Is there something in Powell's allegations (wrongdoing of Republican officeholders? wrongdoing of government agencies?) that would not look good for President Trump to be involved with?
Perhaps we will find out more in time.
For now, I am hearing that Sidney Powell is planning to pursue a lawsuit on election fraud on her own. This is no different than what Lin Wood has done in Georgia and Mike Kelly and others have done in Pennsylvania.
It promises to be an exciting few weeks.
Is there fire underneath all this smoke?
If there is, does anyone have the COURAGE to put it out?
Posted by BeeLine at 9:39 PM