They could not be more wrong.

It is true that confirmed cases have increased drastically over the last several weeks.

Some of that is due to increased testing which is now up to almost 1.7 million tests per day.

That is equivalent to one out of every 194 people in the United States being tested in a single day.

Or one out of 27 people in the United States being tested in one week.

For further perspective, consider that less than 1 million lab tests have traditionally been given each year to diagnose the flu. We are now doing almost twice that in a single day to test for Covid.

Hospitalizations are also rising. This is a major concern. Where will we be in a month if this continues as there is typically a lag of a couple of weeks that follows rising case counts.

Several states (notably those run by Democrats) have reacted to the rising case counts by imposing a new round of lockdown measures.

Oregon's Governor Kate Brown has ordered all business offices to work from home, restaurants and bars limited to take-out only, social gatherings are limited to no more than six people, all gyms and indoor sports facilities closed etc. Schools will remain open in Oregon.

Oregon has had a mask mandate in all indoor spaces since July 1.

Michigan Governor Gretchen Whitmer has instituted a range of similar Covid measures in that state but also closes all high schools and colleges. 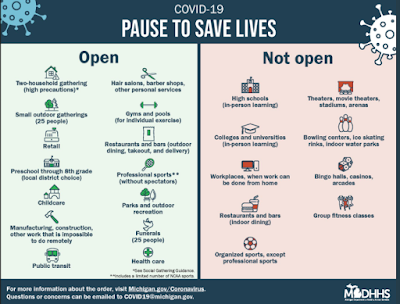 Michigan has had a mask mandate since July 10.

New Mexico Governor Michelle Lujan Grisham has also implemented a strict lockdown for two weeks that includes much or what is being done in Oregon and Michigan but which will also close indoor malls. Indoor gatherings can no include more than five persons.

New Mexico has also had a mask mandate since May. That order has included wearing a mask outdoors in public spaces.

What impact does it appear that the mask mandate has had on the spread of Covid in New Mexico?

I would love for it to be proven that masks really worked. It would give us something that we really could believe in right now. I wear one when required but how can one believe what we have been told in looking at what is going on right now?

As I have written before, there was not one credible study in the last 100 years (before everyone started mandating their use in late Spring/early Summer) that showed that face masks were effective in preventing any virus transmission in the general public.

This included this paper from the CDC that was published in May of this year.

"Although mechanistic studies support the potential effect of hand hygiene or face masks, evidence from 14 randomized controlled trials of these measures did not support a substantial effect on transmission of laboratory-confirmed influenza."

How many times have we been told that if everyone wore a mask that the virus would be eliminated within 4-6 weeks?

Mask mandates have been in place throughout a good part of the country for at least five months. I have been in several areas of the country over the last several months and I do not see anyone that is not wearing a mask while shopping etc. I see more and more people wearing masks outside taking a walk even as cases increase.

At one point does someone look at the facts in this pandemic and conclude that the prior research was actually correct?

"For a successful technology, reality must take precedence over public relations, for nature cannot be fooled."

If science is to progress, what we need is the ability to experiment, honesty in reporting results—the results must be reported without somebody saying what they would like the results to have been—and finally—an important thing—the intelligence to interpret the results.

The latest outbreaks indicate how Covid (like all respiratory viruses) is prone to seasonality when people are more likely to be indoors.

Everyone should keep the three V's in mind to minimize their risk.

Ventilation-you always want to be in places that are well ventilated. Outdoors is best.

Vocalization-avoid places where a lot of people are talking or singing.

You also should recognize that risks are small when exposure to any contact is short. The longer the exposure to anyone the greater the risk. Passing someone in the same aisle at the grocery store presents almost no risk. Talking and cavorting at a bar with 30 strangers for 3 hours is a lot of risk.

Considering all of this it should be no surprise we are seeing the current increase in cases. The rise in cases is most pronounced in the Upper Midwest right now. That area of the country lagged the rest of the country in cases earlier (less community immunity) and colder temperatures have driven more people indoors in the last month.

This is a heat map to show where new cases were coming from at the end of July. Notice that most cases were grouped around areas of the country with very hot temperatures where most people were spending less time outdoors and more time inside in air conditioned environments.

The Upper Midwest was having few cases in July as was the case in the Northeast that saw so many cases in the Spring.

Here is a heat map as of November 8, 2020. Notice how the pattern has reversed.

To this point, although alarms are being sounded, hospital capacities are not being threatened despite what you may be seeing and hearing in the media.

For example, here is a chart that shows hospital capacity utilization in the continental USA and compares it to average utilization for the period 2016-2018. Some states have seen increases in hospitalizations compared to historical averages but most capacities are well below 80%.

Interestingly, New Mexico hospital utilization right now is below historical averages despite the aggressive measures the Governor is instituting in that case.

In my home state of Ohio, hospitalizations have been fairly steady over the last 21 days despite the increasing case trend in the state.

Deaths are actually running below the 21 day trend rate Ohio but you likely don't get this perspective from the news.

It will be important to keep an eye on the hospitalization and deaths numbers in the next several weeks to see if these numbers follow the rise in cases.

The other thing that is in play right now concerning hospitalizations is that we continue to see almost no cases of seasonal influenza this year. It is almost as if the regular flu has been wiped out by Covid.

Thus far, flu tests are showing miniscule .17% positivity rates. That compares to an average of 2.58% for the previous five years at this point in the flu season.

We are seeing the same thing in other countries. 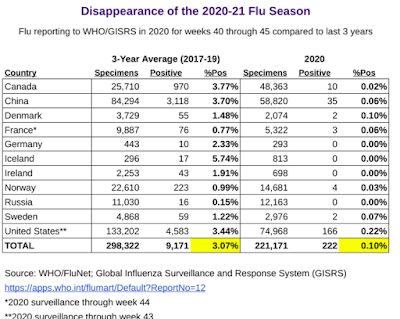 The CDC estimates that influenza was responsible for as many as 740,000 hospitalizations in the United States last year.

To put that in context, Covid thus far has resulted in just over 500,000 hospitalizations in nine months.  If flu cases remain down by 90% as they are right now, Covid cases will merely be replacing what normally would be flu-related hospitalizations.

As I have written before, Covid is nothing to trifle with. It is highly contagious and it can be deadly to those in vulnerable groups.

However, the reaction to this pandemic is not commensurate with the actual risk it poses to the human race.

It is being hyped by exaggerated case and death counts and it has been unnecessarily politicized by both sides.

What would I do if I were President of the United States to put this all in better context?

Mandate that all testing use no more than a 32 cycle threshold. Most labs today are using cycle thresholds in the 40 range. Lowering the cycle threshold would significantly reduce the number of false positive cases that are being found that have no effect on the spread of the disease. Any virus material found in cycle thresholds above this level is dead material that is not infectious. This would allow scare resources in the medical and public health communities to solely focus on true cases that are contagious. The number of confirmed cases would drop immediately by as much as 90%.

Mandate that reported deaths only include those resulting from Covid and not deaths with Covid.  A significant number of Covid deaths are not resulting from Covid but are deaths where it has been determined that there has been a positive Covid test with the decedent sometime over the last several months.

For example, would we count someone as dying from the flu if they had the flu in September and died of a heart attack in November? That is what is occurring with regard to Covid deaths.

Here is the latest CDC data on Covid deaths including what are referred to contributing factors. 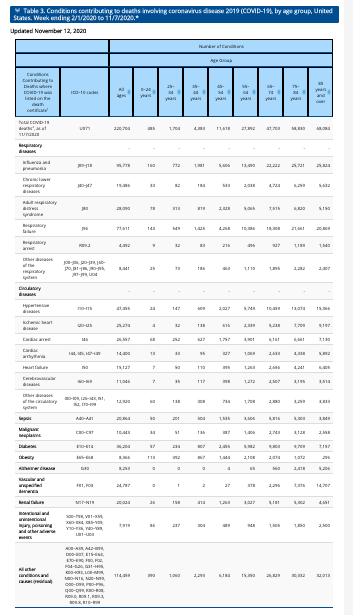 26,557 Covid deaths which also list cardiac arrest as another factor?

7,919 with intentional and unintentional injury, poisoning and other adverse events?

When did we ever classify deaths as being from the flu when they were actually from cardiac arrest, cancer, a sepsis infection or a poisoning or accident?

The reporting of Covid deaths is giving us a distorted view of the risks of the virus and feeding a false narrative.

These actions would not cure Covid but it would allow the public to put this pandemic in better perspective. At this point a good portion of the people in this country have lost all perspective of the risks that Covid involves.

Make no mistake, it is much more dangerous than the seasonal flu. However, it far less deadly than almost every other pandemic we have faced in history.

Even with the expansive definition of what is considered a Covid death, over 90% of the deaths in the United States of those over age 75 since the pandemic began have had absolutely nothing to do with Covid.

The overall survival rate from Covid for all people 75 and older and older (22.6 million people) is 99.4% since the pandemic began.

In September I asked the question when will all of this end? I wrote this at that time.

I am often asked when will it end?

When will we take off the masks, gather in restaurants, attend concerts and the theatre and have our children back in school?

I don't know the answer to that.

I do know that it will not occur until we stop counting and reporting cases and deaths every day.

As long as every case and every death is reported daily there is no hope of returning to normal.

It is impossible for the human brain to operate normally if it is being told that there is something to fear whenever they turn on the television, listen to the radio or check their social media feeds.

How then will it all end?

People must feel confident before things can return to normal.

However, how can people feel confident when they are inundated every day with numbers without any context and they are told they are going to die if they don't wear a mask? And every trip to the store and every virtual school session reinforces that narrative.

It will not end until we stop counting.

The counting will also most assuredly not stop anytime before November 3.

That is something you can definitely COUNT on.

November 3 has come and gone and the counting has actually accelerated.

Where it will stop nobody knows.

In the meantime, keep your wits about you and put all of this in the proper context.

No one else is going to do it for you.

Not Tony Fauci. Not Joe Biden. Not Donald Trump.