In my last blog post I posed the question, "Who Will Win?".

It turns out that nobody won.

We still don't know who won between Donald Trump and Joe Biden.

At some point one or the other might eventually be declared the winner.

I see this occurring only after numerous legal challenges and recounts are undertaken in the remaining contested states.

This is likely to be many times greater than the drama we saw in the 2000 election recount in Florida between George W. Bush and Al Gore that was defined by the controversies of "hanging chads". This time we will likely see a repeat of that in multiple states.

I would imagine there will be a tremendous focus on the validity of vote by mail ballots in those states.

I have no way of knowing whether voting fraud or other irregularities were involved in any of the vote counts in the key swing states of Arizona, Michigan, Nevada, Pennsylvania, Wisconsin, Georgia or North Carolina.

When have we ever seen multiple states suspend the counting of votes and then start up again and see that thousands and thousands of votes suddenly appeared while simultaneously moving the election in favor of Joe Biden from Donald Trump?

It smells to high heaven. Perhaps the votes are legitimate but I don't think I have ever seen worse optics in my life.

It almost looks as if the Democrats decided to cheat and are not even worried about how it appears. After all, who in the media is going to call them out?

These charts show how the vote count unfolded Tuesday night and into Wednesday morning in Wisconsin and Michigan. 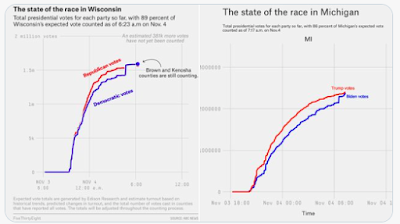 There was a very consistent trend to the voting throughout the entire night favoring President Trump until, BOOM, a miracle occurred.

Perhaps it is all due to a massive 90%+ vote for Biden in mail ballots from urban precincts but it should by all means be investigated and challenged if there was any tampering or illegalities involved.

The same thing is going on right now in Pennsylvania as I write this.

Look at this tweet from FiveThirtyEight.com that shows 23,277 votes for Biden and 0 votes for Trump in one batch of votes out of Philadelphia. 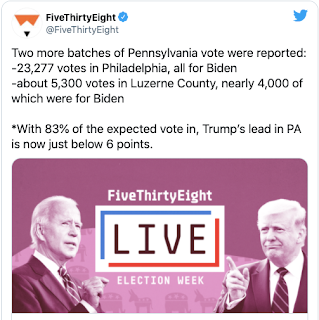 Is anyone supposed to believe that in a group of 23,277 voters there wasn't one person who thought that Trump was a better choice than Biden?

It is even harder to believe that in that large a group you would not find a handful of people who voted for Trump simply because they marked the wrong box on the ballot.

We will see how this unfolds but it is clear right now that nobody won on Tuesday night, most particularly, the American people.

The election process we have witnessed has seriously undermined the public's faith in the most basic foundational element in our system of government.

It is just further evidence how deep we are in within "The Fourth Turning". 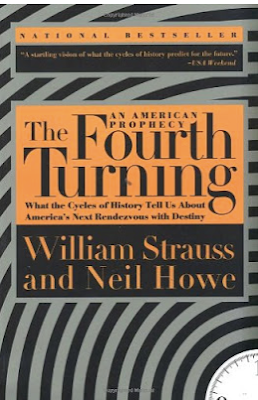 Sitting here today I could not help but remember this passage from that book by Neil Howe and William Strauss that was written in the last 1990's.

Eventually, all of America's lesser problems will combine into one giant problem. The very survival of society will feel at stake...

History warns that when a Crisis catalyzes, a previously dominant political party (or regime) can find itself directly blamed for perceived "mistakes" that led to the national emergency.

If that is true, even the winner of the 2020 election may find that they did not win in the end.

Putting aside the possible election fraud it is still worth noting that half of the country voted for a soon to be 78-year old who clearly shows no capacity to lead the country in this dangerous and challenging time.

The authors of the The Fourth Turning suggest that history is not made by events but by the reaction of human beings to events.  We saw clear evidence of that yesterday.  We are hurtling down the road for a rendezvous with history of our own making.  Two clearly marked paths were there for the choosing.  Half the country seems to have no appreciation for the dangers and risks that one path has for our country and our way of life.

We all will have to deal with where this division and the final decision leads us.