A narrative I often hear is that if Covid had not happened President Trump would have won the election in a landslide.

I challenged that narrative in a blog post I wrote in October in which I pointed out that Trump's poll numbers versus Biden were not any different before Covid than they were two weeks before the election.

The fact is that the media narrative opposing Trump over the last four years had been so repetitive and relentless that the President faced an uphill battle no matter the circumstances.

It is true that if you say anything long enough people will believe it even if the facts are totally the opposite. That is what propaganda is and why it has been used so effectively throughout human history.

Trump could have personally cured Covid, lowered the unemployment rate to 1% and won two Nobel peace prizes (one for his Middle East progress and another for reuniting North And South Korea) and he would have still be vilified by the mainstream media.

I believe the President's handling of the Covid situation had very little effect on the election results.

This seems to be borne out in the exit polls.

Covid came in third when voters were asked what the most important issue was for them. Only 17% listed it as the issue that mattered most. 35% said it was the economy. 20% cited race relations.

51% of voters in the exit poll thought that U.S. efforts to contain the pandemic were going very well or somewhat well.

41% of voters said their family's financial situation was better than four years ago against only 20% who said they were worse off.

Interestingly, 44% of voters said that the Covid pandemic had caused them no financial hardship at all. These voters split for Trump 60%-38%.

18% of voters stated that Covid had caused them severe financial hardship. These voters supported Biden 69%-29%. However, how many of those voters understood before they voted that many of Biden's advisors are strongly urging him to lockdown the economy again. This is something that Trump categorically stated he would never do again.

Here is a voter who is a well known liberal activist who seems to have been living under a rock for the last several months. This is a woman who went to Yale and was a Rhodes Scholar and was an adviser to both Bill Clinton and Al Gore. If she was not aware of where Biden stood on lockdowns how many of those Biden voters who have been hurt so badly by Covid were aware?

None of these poll results indicate that President Trump's actions in dealing with Covid were determinative issues in the election.

I believe that most voters understood that Covid was largely outside of President Trump's or any other politicians control. Those voters who blamed Trump for anything to do with Covid most likely were never with him to begin with no matter what the circumstances.

This is not to say that Covid did not have a significant impact on the election.

It did have three very distinct effects. They just did not involve the President's handling of the pandemic.

First, the fact that President Trump contracted the virus had an effect on the election. That kept Trump off the campaign trail for almost two weeks. This had a major effect because it did not allow the President to be out campaigning at the rallies that he was so good at.

His illness also caused the debate commission to cancel the second debate even though there was no scientific justification to do so. Trump had met the CDC guidelines for the return to normal activities to participate in that debate but the commission refused to sanction his appearance. They would only allow a virtual debate that Trump was not interested in doing.

The failure to have this debate hurt Trump. In particular, the cancellation meant that foreign policy issues, which was to be the focus in the third debate, were never discussed. This prevented Trump from highlighting the many successes he had in this area---the defeat of ISIS, greater funding by NATO allies, the Mideast peace deals, the move of the Israel embassy to Jerusalem, getting Mexico to deploy troops to patrol the U.S.-Mexico border to prevent illegal aliens from attempting to get into the U.S. etc.

Finally, I think there is a good possibility that Trump's performance in the first debate might have been hampered due to the fact that he was in the process of coming down with Covid. He was diagnosed two days later so his body may have been in the early stages of battling the virus during the debate.

Second, the fact that we were living in a Covid world allowed Joe Biden to hide in his basement and avoid campaigning. This also allowed him to avoid the media. Trump's illness gave Biden an even better reason to avoid campaigning.

By doing this Biden was able to avoid risking the gaffes he is so famous. Covid also allowed the Biden campaign to hide the fact that the former Vice President simply did not have the strength and stamina to conduct the normal campaign we would expect of someone who is running for President.

We saw in the last week of the campaign that President Trump forced Biden out of his basement in response to Trump's massive rallies. However, the contrast between the tens of thousands of those at Trump's rallies and the row of cars at one (or maybe two) Biden rallies per day spoke volumes.

Covid helped Biden enormously because it gave him a pass to not campaign and not have to answer questions from the media every day. Therefore, many in the voting public were never allowed the opportunity to fully vet the candidate as is the usual case.

I have no doubt that if Covid had not occurred that Biden's weaknesses would have been easy for the voter to see and understand. Covid allowed Biden to avoid the scrutiny he should have had as a candidate for the highest office in the land.

Third, and most important, Covid allowed almost all states to allow and greatly liberalize the use of mail-in balloting. This was done despite the fact that in many states it was not properly done through a change in law. It was also done without corresponding changes in the election systems and processes which are primarily designed for in-person voting on election day.

The result has been the chaos and uncertainty we have seen over the last ten days and the substantial questions that exist over whether the election results are legitimate or not.

Well over half of all the ballot cast in the election were by mail.

It also appears that the normal procedures for verifying signatures on the returned ballots were not followed.

Here is a tweet from the Chairman the Republican party in Georgia who asks a critical question. It is the same question I have asked about in other states.

It defies all common sense. That is especially true considering the number of new votes cast by mail by voters who had never done it before.

When you see numbers like this you have to wonder whether anyone validated these mail-in ballots as they came in?

None of this would have occurred but for Covid causing politicians to push and promote the use of mail-in ballots you could see were going to be problematic months in advance.

In fact, President Trump warned about the problems inherent in all of this mail-in voting back in May. 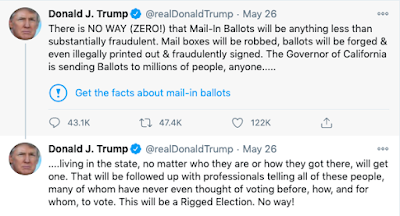 Trump also warned in August that it could take weeks to get the election counts.

All because Covid was used as cover to slant an election?

That is the biggest Covid effect of all.