Joe Biden has been named the winner of the Presidential election by the major news outlets.

The election results have not been certified in any states but it does not look promising for President Trump right now even though the Republicans are filing lawsuits in a number of states challenging the vote totals.

If Biden is ultimately declared the winner he faces formidable challenges as President.

Biden is clearly past his prime and it is questionable whether he can withstand the rigors of being President. If you doubt that, consider how many times Trump stood up and took dozens of questions from reporters at Covid briefings or how many rallies he spoke at.

Can you even imagine Biden being able to do that?

I am wondering whether Biden can easily climb up the steps to Air Force One?

Biden is also going to be facing renewed scrutiny involving what his son Hunter and brother James did to cash in on the Biden name and the extent to which the former Vice President might have been involved. This scandal is no longer in the headlines due to the election coverage but it will not stay that way for long.

Biden also faces a country with many problems and is also very divided along partisan lines. Yes, Covid and getting the economy back to full recovery are big issues. However, it is easy to forget how many things have gone right the last four years.

If he takes office Biden will eventually be measured against this historical baseline and it will not be easy to improve on many of them when someone starts asking if they are better off under Biden than they were under Trump.

He did this in order to memorialize exactly where we are right now to set a clear mark for history to remember this moment in time.

Interest rates are 2.89 percent for a 30-year mortgage.

The stock market closed at 28,000+ even though we have been fighting the COVID for 9 months.

Our GDP growth for the 3rd Qtr was 33 percent.

We had the best economy ever until COVID and it is recovering well.

We have not had any new wars or conflicts in the last 4 years.

North Korea has been under control and has not been testing any missiles.

ISIS has not been heard from for over 3 years.

There are 3 major peace deals in place regarding Israel.

The housing market is the strongest it has been in years. Homes have appreciated at an unbelievable rate and sell well.

Trump got the highest percentage of minority votes of any Republican Presidential Candidate in 65 years.

Biden got the LOWEST percentage of minority votes of any Democrat Presidential Candidate in 65 years.

On top of all of this we are faced with election results right now that over 70 million voters have legitimate questions about.

Joe Biden also faces the burden of governing with a substantial cloud of illegitimacy hanging over his head.

There are many who are saying that President Trump should concede the election for "the good of the country."

I could not disagree more.

Donald Trump needs to pursue every legal option to determine the correct and legal votes in each state.

More than doing this for himself, Trump needs to do this in order that we all might have confidence that our election system is honest. In a representative democracy if the people cannot trust the integrity of the electoral process the entire government system is suspect.

The person who should want the election results fully investigated the most should be Joe Biden. He needs to have that cloud removed from over his head if he is to have any chance of governing.

If Joe Biden really is serious about "healing" the country he should fully support the full investigation of the allegations of fraudulent voting and any audits or recounts necessary to remove any doubts about the integrity of the vote. It is in his best interest if he really believes that nothing illegal was done in the voting process. It would allow him to take office with full legitimacy.

Let's review where we stand right now to understand just show close the vote is in the key battleground states that are still in dispute.

I don't know what the Trump campaign is going to allege in the lawsuits they are filing in these states but I know that they don't have to invalidate a lot of votes due to election irregularities or fraud to reverse the results in these states.

I also know that the Democrats are particularly vulnerable with regard to the heavy number of votes that Joe Biden received with mail-in ballots. These votes are the easiest to challenge in that they need to have been submitted in a certain form to be legal votes.

Let's take a look at what I know to be true in a few of these states.

In Georgia, there are 132,000 active voter registrations in Fulton County that have been flagged with change of address notices meaning that these voters moved away from their current address. If these were voted they could be invalid.

Biden is leading Fulton with 72% of the vote. The mail-in vote percentage was even higher. Let's assume half of those votes were illegally cast. That would mean potentially a net of 18,000 Biden votes could be declared invalid in that one county in a state in which he is only up by 10,000 right now.

Arizona is still counting and Trump was reduced the Biden lead substantially since election night when Fox News called the state for Trump. Trump has closed the gap to 17,000 votes with an estimated 81,000 votes still to be counted.

There are many questions about Wisconsin including a voter turnout that approaches 90% which seems improbably high. Wisconsin election officials also left 234,000 voters on the registration rolls earlier this year although there was evidence that the voters had changed address or had died. This was a clear violation of the law which requires these voters be purged from the rolls. Wisconsin election officials also corrected mail-in ballots in clear violation of the law when the witness requirement was not fulfilled properly. All of these ballots are at risk of being invalidated.

In Pennsylvania, the law is clear that no mail-in votes can be accepted after 8pm on election day. The courts in Pennsylvania ruled that this could be ignored due to Covid and mail-in votes would be accepted for up to 3 days after election day. The GOP took this to the U.S. Supreme Court before the election but the justices refused to rule citing it was premature until the election was concluded. However, the Supreme Court ordered Pennsylvania to segregate those votes.

It appears that Pennsylvania did not obey the Supreme Court order. They have intermingled and counted the late ballots but stated that they kept a written record of them. It seems clear to me that these votes are going to be invalidated. Almost 80% of mail-in votes in the state went to Biden. He cannot lose many votes and still win the state.

I have also see reports that in prior elections about 1% of mail in ballots in Pennsylvania were rejected due to errors. In this election only 1/25 of that number were rejected. These seems to indicate there was little scrutiny of the validity of mail-in ballots when they were received.

2.5 million mail-in ballots were cast in Pennsylvania. Joe Biden received 77% of the vote. Assume that the error rate was only .5% (1/2 of the normal rate). That is 125,000 votes that could be invalidated. If Biden's margin is applied to those votes he is at risk of losing 67,500 votes. That alone would turn the state to Trump.

What else does he have to do?

To do this involves only reducing Biden's margin by 76,000 votes in these three states.

I have not even included Arizona.

Bear in mind I have also not discussed the possible issues involving the voting tabulation machines of Dominion Voting Systems that a number of questions have been raised about and are used in every one of the states listed above.

Trump may not prevail but this election is far from over.

There is also no way that Joe Biden should be referred to as President-elect right now.

Questions about the legitimacy of the vote need to be answered. 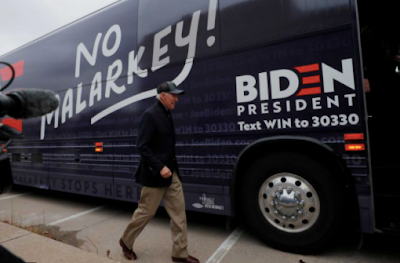 He has an excellent opportunity to prove it right now.

Biden also likes to the talk a lot about the "soul of our nation".  That "soul"might depend on how this election is investigated.  His presidency might as well.