It is normal that the more data you have the easier it is to draw conclusions because certain patterns and trends reveal themselves and larger truths are confirmed.

I have scrutinized a lot of data the last few days attempting to understand the 2020 Presidential election results.

Many are questioning the integrity of the election results. Quite frankly, a lot of things have transpired that don't make sense looking at past elections and trends.

Here are a few.

How could Trump lose and yet House Republicans not lose one seat of an incumbent? Right now it appears that the GOP will actually gain at least 10 seats on the Democrats in the House.

How could Biden only win 3 out of the 17 bellwhether counties in the nation ( those counties that have voted for the winning candidate in almost every election since 1984) and still win the election? It is without historical precedent.

How could Republicans pick up overall state legislative seats in the country and Trump lose?

How could Trump win Florida and Ohio so convincingly (two states that have been considered the most reliable bellwhether states nationally) but lose?

The answer you typically hear to these questions is that voters favored Republicans on the issues but did not like President Trump personally.

Let's look at some data to see if this holds true by looking at some select high profile U.S. Senate races by comparing President Trump's vote percentage in those states compared to the Senate candidate.

These numbers certainly do not fit the narrative that Trump was a drag on the Republican ticket.

In fact, it appears that Trump was most likely responsible for helping all of these Republicans.

Yes, you can look at a state like Maine and see that Susan Collins retained her seat as a Republican Senator in that state with 51.1% of the vote while Trump only garnered 44.2%. However, that was only one percentage point lower than Trump got in 2016. In the meantime, Trump also increased his actual vote total in the state by 7% compared to last time.

This hardly looks like any kind of repudiation of President Trump or his policies.

The narrative heading into the election was that Trump was struggling with women voters and that would cost him the election.

As I have stated before, I take all polls with a grain of salt. I am particularly skeptical of exit polls this year even though they supposedly made adjustments for the high number of mail-in ballots.

However, the exit polls this year actually showed that Trump gained with women voters compared to 2016.

Women have generally been considered the power center of suburban politics.

One of the most interesting data points I have seen in the election results are the numbers that came out of the four suburban counties that surround Philadelphia (Delaware, Montgomery, Bucks, Chester).

For perspective, these four counties voted for Barack Obama by a margin of 123,327 votes over Mitt Romney in 2012.

In 2016, these counties voted for Hillary Clinton by a margin of 188,353 votes over Donald Trump.

Keep in mind that Trump is only trailing Biden by about 46,000 votes in Pennsylvania right now.

Are we supposed to believe that Biden had a 160,000 greater margin over Donald Trump than Barack Obama did over Romney in these four counties?

I don't know about you but those numbers in the suburbs are very suspicious.

How do you also explain that when the overall women's vote nationally actually improved for Trump while women are supposedly the key to the suburban vote?

You have to also consider the fact that over 60% of the vote for Biden in those four counties were through mail-in ballots.

How many were ballots that did not conform to the law?

That is going to be the big question in the legal challenges that the Trump campaign is bringing in Pennsylvania and other states.

The other number that is particularly suspicious to me involves the turnout numbers in Wisconsin.

Wisconsin had approximately 3.6 million voters going into the election per the Wisconsin Election Commission.

Wisconsin allows same-day registration so you can expect it might have been modestly higher.

However, we also know that at least 234,000 of those on the registration rolls of Wisconsin should have been removed before the election because there was clear evidence that they had either moved or died.

Based on the numbers, Wisconsin should have had around 3.4 million registered voters if the rolls had been updated properly. Let's be generous and round that up to 3.5 million to account for same day registrations.

How many votes have been cast in the 2020 election for President in Wisconsin?

That is 93% of registered voters if we use 3.5 million as the base. 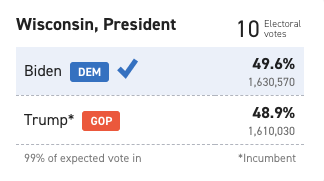 It is simply not believable.

Those levels of voting are not even reached in countries that have mandatory voting laws and penalize or fine those who do not vote.

These numbers look even stranger when you consider that Trump improved his turnout in every county in Wisconsin compared to 2016. Biden underperformed in 57 counties compared to Obama in 2012.

However, in a few counties Biden performed massively better than Obama did.

Here are voter turnout numbers in the five selected counties in Wisconsin that Biden did massively better than Obama in.

In Washington, Biden outperformed Obama by 15%.

In St.Croix, Biden outperformed Obama by 16%.

In Dane, Biden outperformed Obama by 20%.

In Waukesha, Biden outperformed Obama by 32%.

In Ozaukee, Biden outperformed Obama by 38%.

Bear in mind, that in Milwaukee county Biden underperformed Obama by 4.6%.

How is it possible that Biden outperformed by such large margins in just a few counties?

Why does this follow the same pattern as in Pennsylvania?

Something does not add up.

I am highlighting just a couple data points that do not seem to be consistent with the larger narrative.

There are hundreds of others out there.

Many seem to be related in some way to the massive increase in the numbers of mail-in ballots.

As I wrote back in August, utilizing mail-in ballots to the degree they were used this year was an invitation for fraud.

Moving to mail-in ballots when the entire voting system and infrastructure is geared to in-person voting is an invitation to fraud.

To insure the integrity of the election it would be necessary to have scores of people opening the mail, tabulating results and verifying signatures and voter id's against the registration rolls. It would be many times more laborious than the current system and require more time.

From what we are seeing and hearing, it appears little was done in many of these key swing states to insure that we had that integrity.

Let's revisit where we are and why no reasonable person should believe that Joe Biden has won this election right now.

About 14.8 million votes were cast in the three key swing states of Pennsylvania, Wisconsin and Georgia that Joe Biden now leads in. If Trump wins those three states and holds the lead he currently has in North Carolina and Alaska he will have the majority of electoral votes.

Biden's vote margin is less than 75,000 votes of the nearly 15 million votes in those three states. A mere .5% separates Trump from Biden.

If only about 1% of Biden's votes were somehow invalidated in those three states because they were illegally cast, it would be enough to reverse the outcome.

For context, consider that 20% of the mail-in ballots in New York City were rejected in the 2020 primary in New York. A lot of that was attributed to voters not being used to the mail-in voting rules. However, the rejection rate was 1.53% in LA county and they are used to mail-in voting.

A recent report indicated that Pennsylvania had only rejected 951 out of 2,614,011 mail-in ballots--.03%. This is also when most voters were doing mail-in ballots for the first time.

The Trump campaign's lawsuit in Pennsylvania alleges that Allegheny and Philadelphia counties alone received and processed 682,479 mail-in and absentee ballots without any review whatsoever.

Does that sound like any real scrutiny or review of these ballots was done?

Further, if a computer "glitch" were to be found that switched votes from Biden to Trump it would only take half of that 1% of votes for Trump to win those three states.

Trump may not prevail in all of this. It is very much an uphill battle once the votes have been counted. It is going to require that votes that have already been counted will have to thrown out.

No one is going to want to make a ruling to invalidate votes be it election officials, state legislators or the courts.

However, just because it is hard does not mean it should not be done. After all, we are talking about the foundational element in our representative republic. If we cannot trust the integrity of the vote we don't have a country.

At the very least, this election should teach us to never again allow mail-in ballots except in extremely limited circumstances (out of the country, military service, certified house-bound disability).

They are just too susceptible to fraud.

Most of the rest of the world recognized this a long time ago.

France has banned mail-in voting since 1975 because of voting fraud.

78% of OECD countries bar mail-in voting for those living in their countries or require a photo ID to get a mail-in ballots.

85% of the countries in the EU follow similar rules.

The author of the study that compiled the different mail-in ballot rules around the world opined.

“If concern about vote fraud with mail-in ballots is delusional, it is a delusion shared by most of the world.”

Perhaps blockchain or some other technology can make remote voting reliable in the future. It is clear that was not the case in 2020 from what the numbers above reveal.

My advice right now is to forget the narrative being promoted by Big Media and Big Tech that there is no basis for the lawsuits and investigations of the results of the election in these key states.

To be fair, should Twitter also not be putting a similar disclaimer on any tweet that refers to Joe Biden as President-elect right now? How about "The results of the election are in dispute"? There is as much to justify that disclaimer as the one they are using above.

There is a lot that doesn't add up.

Let's hope that we will get some real answers as to why they don't add up over the next couple of weeks.

If the Democrats claim there is zero evidence of fraud, they should welcome the investigation.

They should have nothing to lose.

However, the nation has much to gain by any investigation not the least of which is to know whether or not this election was legitimate or not.