It is becoming increasingly difficult to document all the indescribably inane things that we see unfolding in the United States of America right now in our reaction to Covid.

If we were not living through right now I don't know that we could adequately comprehend it or have anyone else in another time believe it.

Covid represents a health risk to all of us. However, I would submit that Covid is doing far more damage to our brains than any other parts of our bodies.

A few examples over the last several days.

Governor Mike DeWine of my home state of Ohio has ordered a curfew in the state for at least the next three weeks that will require all residents to be in their homes from 10pm until 5am.

Does Governor DeWine seriously believe that this is going to impact the virus?

Does he have evidence that Covid is only spreading at those wee hours of the night?

It is does not get much more indescribably inane than that.

We also have Governor Thomas Wolf in Pennsylvania ordering those in his state to wear a mask in their homes if they have anyone in their home that is not in their household even if they are socially distanced.

In other words, you would be required to wear a mask in your home if a furnace repairman is working in your basement and you are in your upstairs bedroom reading a book.

That also means that if Aunt Nellie comes to visit you for Thanksgiving week and stays in your guest room that everyone in your house is going to need to mask up for the duration of the visit.

I assume you are allowed to take off your mask to brush your teeth.

It is beyond me how anyone would believe that such an order could be considered constitutional. For example, in 1965 the U.S. Supreme Court in Griswold v. Connecticut  ruled that a state could not deny married couples the ability to purchase or possess contraceptives in that it would constitute an invasion of their "right to privacy" insofar as the marital bedroom is concerned.

In Stanley v. Georgia (1969) built on the "right of privacy" further in unanimously deciding that an individual had a right to possess and view pornography (including  pornography that might be the basis for a criminal prosecution against its manufacturer or distributor) in his own home.

Have we reached a point that you have a right to view pornography in your home but you do not have the right to refuse to wear a mask in the same home?
I have to think that even Ruth Bader Ginsburg would have no problem in striking down that Pennsylvania face mask order.
A California judge has recently ruled that strip clubs in San Diego must be allowed to stay open while state and local officials continue to stand in the way of churches having religious services due to Covid.

A California judge ordered San Diego to reopen strip clubs even as local officials crack down on churches.
San Diego Superior Court judge Joel R. Wohlfeil ordered the state to end any actions that prevent the clubs from "being allowed to provide live adult entertainment," according to the decision. The owners of two strip clubs argued that their business is legally protected speech guaranteed by the First Amendment—the same argument that churches have been making about their own services.

It is an interesting decision in that the First Amendment specifically mentions freedom of religion as the first item in the Bill of Rights---it is actually listed before freedom of speech, freedom of the press or the freedom to peaceable assembly.

Congress shall make no law respecting an establishment of religion, or prohibiting the free exercise thereof; or abridging the freedom of speech, or of the press; or the right of the people peaceably to assemble, and to petition the government for a redress of grievances.

Do you see any mention of the freedom of strip clubs to operate in the First Amendment?

This is where we are?

How about Oregon, which I wrote about in my last blog post, where the Governor has recently ordered all business offices to work from home, has restricted restaurants and bars to take-out only and limited social gatherings to six people?

At the same time, voters in Oregon in the November election voted to decriminalize heroin. meth, cocaine and other street drugs if they are a "non-commercial" amount.

Use all the drugs you want to personally but don't visit grandma in a nursing home, go to the gym or dare enter a restaurant in the state of Oregon! 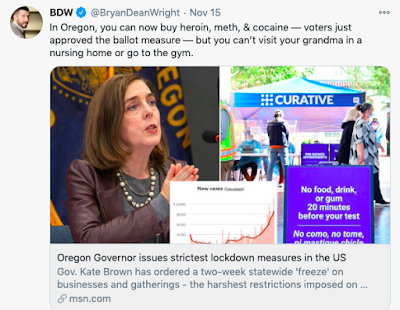 We truly have entered "The Twilight Zone".

Finally, let's consider the views of one of Joe Biden's "science" advisors on Covid.

You may recall that Biden told us that he would always follow "the science" and "the experts" on dealing with Covid.

Earlier this week Biden named 13 health experts to what he is calling his Covid-19 Transition Advisory Board.

One of those "experts" is Dr. Ezekiel Emanuel. Dr. Emanuel is the brother of former Obama adviser and Chicago Mayor Rahm Emanuel.

Dr. Emanuel is known for his outspoken views on what value we should put on older people. In an essay in The Atlantic in 2014 he suggested that he hoped to die at age 75 and stated that he thought more should share that view.

Emanuel argued in that essay that "by 75, creativity, originality and productivity are pretty much gone for the vast, vast majority of us"

It makes you wonder why Dr. Emanuel would want to support and work with Joe Biden who is about to turn age 78?

Emanuel also has weighed in with what I think are a few other controversial views concerning Covid.

He argues that the Covid vaccine should be first distributed globally before it is made available to Americans.

I guess it does not matter very much to Emanuel that the two companies who have announced successful Phase Two trials, Pfizer and Moderna, are both U.S. companies which took billions of dollars in federal taxpayer funds to develop the vaccines.

Emanuel has also argued that the age group most vulnerable to Covid-the elderly-should be the last in line to receive the Covid vaccine rather than first as has been proposed by the Trump administration. He believes the young should get the highest priority on the vaccine because they have the longest life expectancy.

Emanuel doesn't seem to be "following the science" that the young are at the lowest risk and the elderly at the highest risk from the virus.

This is from an article in the New York Post in September which highlighted Emanuel's views on the subject.

Biden adviser Ezekiel Emanuel wants to reverse the Trump ­administration’s intent to offer the vaccine to those over 65 ahead of the general population. People over 65 are at highest risk from COVID-19. But in a new piece in the Journal of the American Medical Association, Emanuel argues the elderly shouldn’t be given priority — because they don’t have as long to live anyway.

I wonder how many of those voters over age 65 who voted for Biden knew this is the "science" that the Democrat candidate said he would follow regarding Covid?
Emanuel's views on not giving priority to the oldest Americans on the Covid vaccine is also interesting in that he seems to be saying that Joe Biden should be among the last to receive any vaccine than being among the first.

I don't think Biden got Emanuel's memo on the subject.

Where do you think a 78 year old American is on Emanuel's list for those who should get the Covid vaccine?

Yes, Covid is a health risk to all of us. However, it seems that a fairly large portion of our political class have lost their minds because of it.

How many people are using their own minds to conclude just how indescribably inane much of what we are being told really is?