Beijing, We Have A Problem

China is being confronted with several big issues right now.

The trade issue with the United States has gotten the most attention over the last few months.

President Trump seems determined to get the Chinese to play a little fairer when it comes to trade.

Thus far, China has been unwilling to do so.

I have stated many times in these pages that it was going to be very difficult to get the Chinese to agree to any trade deal. They have had it good for a long time without anyone calling them out (Republicans and Democrat alike). No one wants to give up an extremely advantageous situation easily. The Chinese are no different.

On the other hand, I am not sure that China ever thought that Donald Trump would be so indefatigable.

A 15% tariff went into effect on September 1 on $125 billion of additional imported goods from China including smartwatches, Bluetooth headphones, flat panel tv's and footwear.

Since the tariffs went into effect the Chinese economy has been slowing. Over the last year, China had its worst GDP growth performance in 17 years. Consumer spending, industrial production and car sales in China are all showing signs of distress.

To compound matters, the price of pork (the primary meat consumed in China) has skyrocketed over the last several weeks. Pork prices surged 18% in just two weeks recently and are up more than 50% over the last year as reported in this article from Zero Hedge.

At the same time fruit and vegetable prices have also increased which is pushing overall consumer prices higher.

Pork prices have been under pressure over the last year as the Chinese have had to deal with a "pig ebola" outbreak that is hurting supply. However, on top of that, China is putting tariffs on American farm goods like pork and soybeans which further increase prices.

This puts the Chinese in a particularly bad place as they are seeing consumer prices rise at the same time that producer prices (squeezed by US tariffs) are falling.

It is not a good combination if you want to keep the citizenry happy.

It is also clear that the citizenry in Hong Kong are not very happy to begin with even before higher food prices are factored in. The Hong Kong protests are another big issue that the Chinese have to deal with.

The protests in Hong Kong also significantly complicate China's negotiations with the United States on trade. China risks global condemnation if they attempt to strong-arm the protestors in Hong Kong like they did in Tiananmen Square three decades ago. Such a move would significantly strengthen Trump's position.

As I wrote in "Keep Your Eyes on Hong Kong", China is in a very tough spot in Hong Kong.

I pointed out in that blog post that the protests in Hong Kong were a prime lesson in showing how difficult it is to take something away from the people. Once people have freedom they are not going to easily give it away.

After I wrote that blog post I came across an interesting piece on information from economist.com that should make the Chinese even more nervous about their future hold on Hong Kong.

It seems that as time has gone by the people in Hong Kong are identifying more as Hong Kongers than as Chinese. What is most telling is that the younger the age group, the more that they identify that way. Those who are older (and lived most of their lives when Hong Kong was associated with Great Britain) are least likely to consider themselves a Hong Konger.

In 1997, when Hong Kong was returned to China after 150 years of British colonial rule, the University of Hong Kong surveyed local residents about how they defined themselves. That year the share of respondents identifying as “Chinese”—as opposed to “Hongkonger” or “Mixed identity”—was about one in five; over the next decade this figure rose to more than one in three. Since 2006, however, it has fallen steadily. In June, fewer than one in ten said they were exclusively Chinese, a historic low. A plurality now call themselves Hongkongers (see chart). 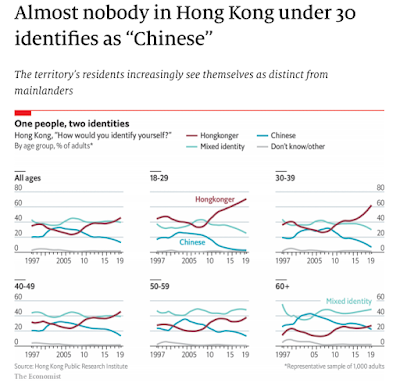 You would expect it to be the opposite. Those older remember what Hong Kong was like before China gained control. The young have spent most of their lives under the current "one nation, two systems" policy that applies to Hong Kong.

Why is this such a problem for the Chinese communists?

Old people don't take to the streets and start revolutions.

We are seeing something like that playing out in Hong Kong right now.

Beijing, we have a problem.