Have you noticed that the Democrats running for President almost never mention the economy?

They talk a lot about how they are going to give this group or that group more money.

They may talk about economic injustice.

They don't make any claims about how they are going to make the economy better or create more jobs.

If they do talk about creating jobs it is only to replace the jobs they will destroy in the coal, oil and gas sectors of the economy that they want to outlaw.

If you look at the numbers underlying the economy you will understand why the Democrats are avoiding the subject.

Here are some numbers from the latest Bureau of Labor Statistics report.

The overall unemployment rate is 3.7%.

The unemployment rate for women is 3.3%.

The unemployment rate for African Americans is 5.5%.

The unemployment rate for Hispanics is 4.2%.

The unemployment rates for African Americans and Hispanics are the lowest in history. 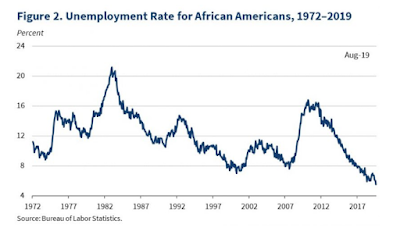 This graph shows the trend of the overall unemployment rate over the last three years.

The strong economy is also causing hourly earnings to rise. Over the last 12 months nominal average hourly earnings rose 3.2%. This marks the 13th straight month that year over year wage gains exceeded 3%. Prior to 2018, hourly wage gains had not reached 3% since 2009.


If the Democrats do talk about the economy they often argue that President Trump just inherited a great economy from Obama.

However, if we went back to the summer of 2016, when Obama was President, the CBO was projecting that there would be about 147 million employed by 2019.

This chart shows what has actually occurred compared to what was projected in 2016. 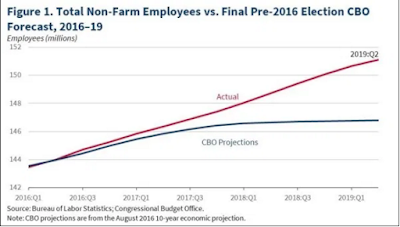 An additional 4.5 million jobs have been created under Donald Trump than were projected three years ago.

In total, almost 8 million more people are employed today than they were three years ago.

This has resulted in the number of Americans on food stamps falling by 6.3 million since President Trump took office.

Do you want to know why the Democrats and many in the mainstream media so desperately want to see the United States enter a recession?

Look at the numbers and graphs above.

Their hatred of Donald Trump is so strong that they actually want to see Americans suffer in the pursuit of their agenda.