A school needs parental permission in order for a student to go on a field trip.

It needs parental permission to participate on a school sports team.

It needs parental permission to participate in the school band.

A school needs parental permission to allow the school nurse to administer an aspirin to a student. 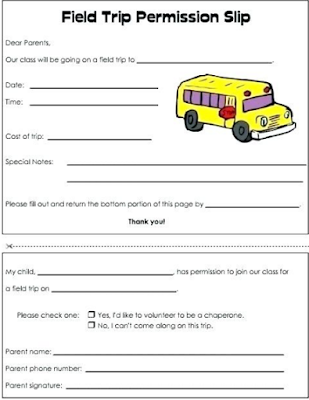 None of that helped Jay Keck and his wife who recently wrote an opinion piece in USA Today about how his local public school undermined their efforts to help their daughter who at 14 years of age suddenly decided she was a boy.

The story is shocking but is yet another sign about how far off the rails many things have gotten in this country.

In April 2016, my then 14-year-old daughter became convinced that she was my son. In my attempt to help her, her public school undermined me every step of the way.

Throughout my daughter’s childhood, there were no signs that she wanted to be a boy. She loved stuffed animals, Pocahontas and wearing colorful bathing suits. I can’t recall a single interest that seemed unusually masculine, or any evidence that she was uncomfortable as a girl.

The only difficulty she had was forming and maintaining friendships. We later learned why: She was on the autism spectrum. She was very functional and did well in school, helped by her Individualized Education Program (IEP), a common practice for public school students who need special education.

At her high school, my daughter was approached by a girl who had recently come out at school as transgender. Shortly after meeting her, my daughter declared that she, too, was a boy trapped in a girl’s body and picked out a new masculine name.

Their daughter did not tell her parents that she had decided she was a boy. The school knew, affirmed the new identity despite knowing of her mental health challenges, and started calling her by her new name and the new pronoun. They started having her use a gender neutral restroom. The school never reached out to the parents with any of this information.

When the parents found out what their daughter was doing they were shocked and set up a meeting to explore ways to help their daughter.

In an IEP meeting just after she told us about being a boy, I told the school that our wishes are to call her by her legal name at all times. The social worker present at the meeting stated that we have that right to make that request, so I assumed school staff would follow our directive. I followed up that meeting with an email, but later learned that my request was ignored and school staff continued to refer to her by the male name.

We met with the school district’s assistant superintendent, who told us the hands of school personnel are tied and that they had to follow the law. But there was no law, only the Obama administration’s “Dear Colleagues” letter of May 2016 that said schools need to officially affirm transgender students. Just three months later, in August 2016, a federal judge in Texas blocked the guidelines from being enforced. And in February 2017, the Trump administration rescinded the Obama-era guidelines, leaving it to the states to set their own policies.

I also learned that the ACLU has sent threatening letters to schools stating that it is against the law to disclose a student’s gender identity, even to their parents. But this letter appears to misunderstand federal law. The federal Family Educational Rights and Privacy Act requires that schools allow parents to “inspect and review” their child’s education records as long as the child is under 18.

The Keck's daughter was evaluated by a psychologist approved by the school who agreed with the parents that her sudden transgender identity was driven by her underlying mental health conditions. However, he would only share this opinion "off the record" because he was concerned about the backlash he would receive from the school and others.

In my attempts over the past several years to get help for my daughter, what I have learned has shocked me.

The National Education Association has partnered with the Human Rights Campaign and other groups to produce materials advocating automatic affirmation of identities, name changes and pronouns, regardless of parents’ concerns. In 18 states and the District of Columbia, including in my home state of Illinois, there are “conversion therapy” bans, which prevent therapists from questioning a child’s gender identity. No wonder my daughter’s therapist would only speak to me off the record.

You have to ask what is going on?

Have parents no rights in these situations?

Why are schools pushing a political agenda rather than following the science of biology?

In 1979, Dr. Paul McHugh, the psychiatrist-in-chief at Johns Hopkins put a stop to all gender reassignment surgeries at the hospital based on his findings that almost all transgender issues involved mental illness. Many elite medical centers followed suit.

However, over the last 10 years much has changed. Science has been ignored because of politics. 45 gender clinics have opened across the country catering solely to children with transgender issues. Are we to believe that this has all resulted from genetic errors? Are we to believe all of these transgender issues just suddenly materialized out of thin air over the last decade?

McHugh still believes transgenderism is a mental disorder 40 years later even though he is now attacked regularly by the LGBT community. His own hospital has reversed course due to the political environment and is once again doing gender reassignment surgeries. 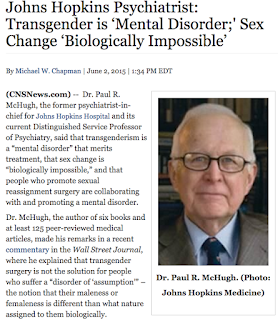 The science has not changed. However, the politics has. We see it in cases like that of the Kecks.

We see it in the statistics that Ryan Anderson of the Heritage Foundation cites in his commentary last year titled "The Sex-Change Revolution Is Based On Ideology, Not Science".

80% to 95% of children with gender dysphoria will come to embrace and affirm their bodily sex.

41% who identify as transgender will attempt suicide at some point in their lives.

People who have sex transition surgery are 19 times more likely than average to die from suicide.

Tied to all of this is an interesting case that will be argued in the U.S. Supreme Court  in the near future over whether "gender identity" is a protected class for purposes of employment discrimination like a person's sex or race is.

The law mentions only a person's sex. However, the EEOC under the Obama administration expanded the definition  to include a person's gender identity.

At issue in the case is a man who wanted to dress as a woman in his position at a funeral home, even though there was an employment policy that required all employees to dress in sex-specific ways.

What I find most interesting about the case is that an amicus (friend of the court) brief has been filed by nine people who were once transgender but have now reverted to affirming their birth sex.

They argue that there is no such thing as gender fluidity or transgenderism. It is a mental, not a physical condition. They ought to know. They have lived it and come to realize it was a fantasy.

Almost every single person in the brief said they stopped being transgender with the help of therapy. It didn’t just help them heal, but also revealed that deeper emotional traumas were often the cause of their gender dysphoria and the reason they chose transgenderism in the first place. All of the people claim that those who proposed or helped them transition often (unknowingly) created more pain.


They conclude their brief by arguing that forcing employers to affirm the denial of nature and requiring them to reinforce the mental illness of a employer cannot be required by the law when it is likely to cause more harm than good.

The same can be said about our schools.

The former transgender people who filed the amicus brief used examples in their filing of other dsyphorias (mental illness dealing with dissatisfaction or unease with one's body) to show just how far off the rails all of this is.

Would we allow a school or employer to encourage someone with anorexia to be on a low-calorie diet or to have their stomach stapled?

Would we allow someone with xenomelia (the feeling that one or more limbs do not belong) to be encouraged to have an amputation?

Like so many liberal and progressive ideas, this is another that one that shows that in our eagerness to do "good" we are doing far more "harm" to the people who need "help".

It is truly sad.

The story of the Jay Keck family shows just how sad it really is.