When Beliefs and Facts Collide

The President, Vice President and all Civil Officers of the United States, shall be removed from Office on Impeachment for, and Conviction of, Treason, Bribery, or other high Crimes and Misdemeanors.

The Constitution gives the House of Representatives the sole power to impeach an official (by majority vote), and it makes the Senate the sole court for impeachment trials (2/3 vote needed to remove someone from office).

Impeachment was intended by the Founders to be an extraordinary measure when there was some abuse of office or violation of public trust.

How extraordinary and rare is it that the House or Senate might consider impeachment?

Since 1787, there have been less than 20 instances in which articles of impeachment have actually been approved by the House. Just eight times---all involving federal judges---have the officials been convicted and removed from office by the Senate. Notice these were all federal appointees. None were elected.

I provide this as context to evaluate the actions of the Democrats as it relates to Donald Trump.

NewsList.co has compiled a chronological list of 89 things that Democrats have said that Donald Trump should be impeached for since he became President.

The first was within two weeks of Trump assuming office.

Below is the list just since the Mueller report was released and the hopes the Democrats had for it to be the ticket for Trump's impeachment were dashed. There are 36 instances alone in the last five months in which a Democrat suggested Trump should be impeached for something or other.

Forget all of this nonsense.

The reality is, insofar as Democrats are concerned, the primary "high crimes and misdemeanor" that Trump has been involved with was getting elected. That is the reality. There is nothing else driving this.

The fervor in which the Democrats are now beating the drum for impeachment seems to suggest that they must not be very confident that they can defeat him next year.

Why else put the country through the circus of impeachment, the chaos it creates and the conflicts it will inflame, when we are just one year away from a national election anyway?

It makes absolutely no sense for our nation when there are so many other things that we need to be working on.

Of course, there is not much sense in anything the Democrats have done since Trump was elected.

The book "When Prophecy Fails" helps explain it. 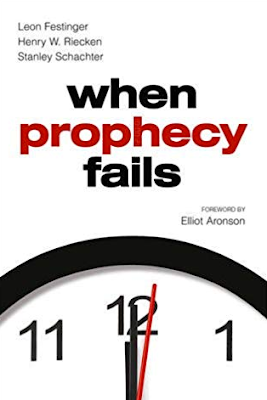 The book is the real life story of a small religious cult in the 1950's who believed they had received a prophetic message that the world was going to end just before dawn on December 21, 1954.

The group believed that they were going to be spared by aliens in a UFO which would come to take them away the night before.

The core group was so committed to their belief that they had quit their jobs and had given away all of their possessions to prepare for their departure on the UFO. Some had even left their spouses.

They all gathered in a room the night all of this was to occur, and as midnight came and went, the group sat in stunned silence as the clock ticked away toward dawn and there was no apocalypse and no aliens with flying saucers showing up to spirit them away.

You can only imagine how they felt. They were "all in" and their beliefs had been proven 100% false. Their world was literally turned upside down.

You would think they would admit they were wrong and move on with reality.

However, many of the members doubled down. They refused to admit they were wrong. Instead, they rationalized that their efforts had actually saved the earth from destruction.

This is a classic example of what behavioral psychologists call cognitive dissonance.

This is the state a person finds themselves in when a strongly held belief is contradicted by newly discovered facts. This conflict of beliefs and facts puts the person in a state of extreme discomfort. To reduce the discomfort the person has to reduce the dissonance or conflict.

The easiest way to do this is to hold to your beliefs irrespective of the facts. Altering your beliefs, after you have invested so much in maintaining them, is very difficult. This usually means we rationalize our beliefs and behaviors, rather than accept reality, as we don't want to admit to others (and most importantly, ourselves) that we were wrong.

When faced with this conflict we usually go into hyperdrive to try to enlist others in social support for out belief. We really do double down on our belief refusing to accept reality.

This was readily apparent with the UFO religious cult who eschewed all publicity requests before the event but reversed their distaste for publicity on the afternoon of December 21, 1954. They started calling newspapers to spread the message far and wide that their actions had saved the world. They desperately wanted to proselytize others to their beliefs for social support and to lessen the pain of disconfirmation.

Does any of this sound familiar?

To me, it sounds exactly how Democrats have acted since Donald Trump was elected.

They strongly believed that Hillary Clinton would win the 2016 election.

They could not conceive that the American people could elect Donald Trump.

The fact of Trump's victory rocked their world and shocked their systems to the core.

Rather than accept the facts, they set about to rationalize that Trump's victory was fraudulent. It was due to Russian collusion. It was the result of ignorant deplorables. It was because of voter suppression. It could not have occurred without the antiquated electoral college. How many rationalizations have we heard from Democrats as to why Trump won and Hillary lost?

Trump was illegitimate and he had to be removed from office by any means possible. Calls for an investigation into his impeachment have been incessant almost from the day he took office.

The Democrats have spent nearly three years trying to convince people of their beliefs. They have been joined by the mainstream media which shares the same beliefs. It is a never ending echo chamber. They simply cannot accept reality as it is so far removed from what they believe to be true. They are incapable of rational thinking.

This is the only way I know how to explain what the Democrats and media are doing.

It makes no sense to any rational thinker who looks at reality and facts.

By the way, the Rasmussen poll had Trump at a 53% approval rate on September 24 right before the most recent Democrat and media impeachment assault on Trump began. On the same day of Obama's first term, his approval rate was just 44%.

These are facts that just don't square with the beliefs of Democrats. How can this be? It is simply not possible for Trump to have a higher approval rating than Obama. 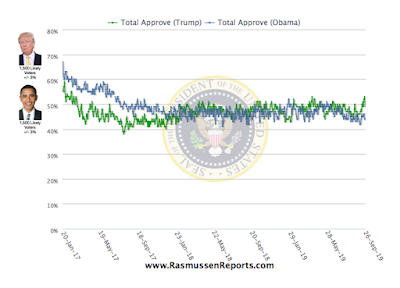 This is not to say that some Trump supporters are not guilty of the same cognitive dissonance. There are those who think that Trump can do no wrong. They think he orchestrates and plans every step he takes as if he is in a 4-D chess game. Of course, he never makes a bad move and he is always three steps ahead of everyone else.

Will the Democrats ever change?

I am not optimistic.

People who have spent this much time and effort defending and rationalizing their beliefs are not likely to suddenly change their minds irrespective of the facts. They just rationalize their beliefs even more.

It usually takes undeniable disconfirmatory evidence to occur and to be recognized by an individual holding the belief to finally give in and admit they were wrong. However, this is unlikely to occur as long as others in their social circle continue to believe. Isolated believers eventually give in. Those with social support stick with their beliefs over facts.

With the mainstream media fully anti-Trump, and millions of people on Twitter and social media willing to provide social support, it is difficult to conceive of the Democrats becoming rational human beings.

A Trump re-election may be the disconfirmatory evidence that is necessary for Democrats to admit they were wrong. Then again, it might just initiate a new cycle of cognitive dissonance and another four year similar to the last three.

The worst thing that could happen would be to see Trump defeated. This would suggest to Democrats that they were right all along and would undoubtedly result in aggressive action to implement an overreaching socialist progressive agenda fueled by arrogance. I can almost guarantee that would be a grave misjudgment about the mood of the public. The end result would be a disaster for the nation dwarfing anything we are seeing now.

The bottom line is this.

When beliefs and facts collide, it is the beliefs that almost always survive.

I write this blog to give you the facts. I know many of you pass it on to others who may have conflicting beliefs. My hope is that the facts might make a difference to some people out there. However, I know that for many the facts I write about are irrelevant. They believe what they believe and no amount of facts are going to change their mind.

Guard against being that person.

When facts collide with beliefs, it is time to reassess your beliefs.

It is a lesson the Democrats seem incapable of learning.
Posted by BeeLine at 9:15 PM