We now live in a soundbite world and a 280 character universe.

That is a big reason why so many know so little today.

They never get the full story. They are never given the context to understand an issue.

This has become particularly true in politics.

Donald Trump is famous for his Twitter trolls and tirades.

The Democrats running for President are on Twitter as well explaining how they are going to make everything right with the world.

Let's look at a few recent tweets from the Democrat candidates and put what they are selling in a little more context.

Just remember, however, that for millions and millions of voters (many of them young) the tweet or Facebook post is the only story they ever get. 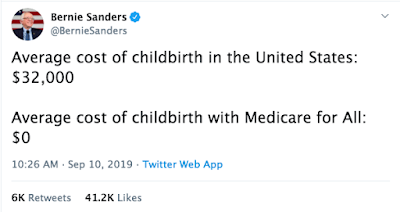 Bernie appears to suggest that the doctors, nurses and the hospitals that provide the care for childbirths are going to work for free in the future.

The cost of childbirth is clearly not going to go away under Medicare for All. It is just a question of who is going to pay for it.

As I have written before, Bernie keeps telling people that Medicare for All will be free. The fact is that current Medicare is anything but free. It takes an enormous amount of taxes to fund the program and it still requires monthly premiums, deductibles, coinsurance and private supplemental insurance to pay the bills. It will not be free.

Another fact that Bernie does not mention is that 43% of all births in the United States are paid for by Medicaid. Medicaid pays for 66% of all African American and 60% of all Hispanic births. I guess the cost of these births is already $0 with his way of thinking. Of course, the American taxpayer is paying the bill.

Here is Andrew Yang promoting his proposal to give every American adult a "Freedom Dividend" of $1,000 per month.

I give Yang credit for being creative but let's consider the math.

You also have to consider the fact that there are 141 million taxpayers in the country but 97% of the taxes are coming from the top half.  That means that about 20% of the population produces the revenues that pay for the bills that many of the remaining 80% are enjoying.

As I have also written before, 71% of all current federal spending is comprised of payments to individuals (Social Security, Medicare, Medicaid, foot stamps, housing subsidies, child care subsidies, etc). That is $3 trillion out of a $4.3 trillion budget.

Is that not already a pretty substantial dividend?

Elizabeth Warren weighs in with a tweet about her plan to increase Social Security benefits by $200 per month for every beneficiary.

Never mind that the Social Security system cannot meets its current obligations as it is.

Of course, Warren has a plan for this. This is Warren's new campaign logo. 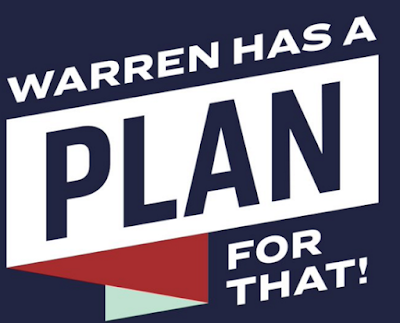 What's her plan for most everything she wants to do?

Tax the rich. Give stuff away to others.

Warren not only wants to remove the FICA wage cap, she wants to raise income taxes and institute a wealth tax as well to pay for forgiving student loans, free childcare, increased teacher pay, Medicare for All and a Green New Deal. Along the way she wants to also ban all future oil exploration and natural gas fracking.

My belief is that Warren's Social Security gambit is actually meant to distract and mislead Seniors in order to keep them from focusing on her proposal to eliminate the requirement that corporate executives and fund managers act as fiduciaries for their shareholders and investors.

Large corporation and investment funds would need to be re-chartered and they would need to consider numerous "stakeholders" rather than just those who put their capital at risk for the enterprise.

Who would be most detrimentally affected by Warren's proposal? Older Americans who have worked and saved over a lifetime and who have their life savings invested in stocks.

Former Senator Phil Gramm and Mike Solon took aim at Warren in a Wall Street Journal op-ed right before she came out with her Social Security bonus. Coincidence?

Her “Accountable Capitalism Act” would wipe out the single greatest legal protection retirees currently enjoy—the requirement that corporate executives and fund managers act as fiduciaries on investors’ behalf. To prevent union bosses, money managers or politicians from raiding pension funds, the 1974 Employee Retirement Income Security Act requires that a fiduciary shall manage a plan “solely in the interest of the participants and beneficiaries . . . for the exclusive purpose of providing benefits to participants and their beneficiaries.” The Securities and Exchange Commission imposes similar requirements on investment advisers, and state laws impose fiduciary responsibility on state-chartered corporations.

Sen. Warren would blow up these fiduciary-duty protections by rewriting the charter for every corporation with gross receipts of more than $1 billion. Every corporation, proprietorship, partnership and limited-liability company of that size would be forced to enroll as a federal corporation under a new set of rules. Under this new Warren charter, companies currently dedicated to their shareholders’ interest would be reordered to serve the interests of numerous new “stakeholders,” including “the workforce,” “the community,” “customers,” “the local and global environment” and “community and societal factors.”


If you have ever read Ayn Rand's Atlas Shrugged this should all sound very familiar. 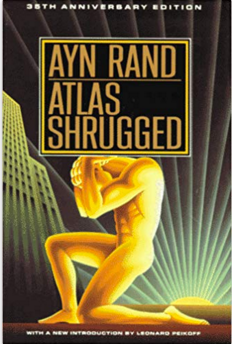 Rand, a Russian emigre, wrote the book in 1957. The book is set in a future USA whose economy is collapsing as the most productive people in society slowly check out rather than deal with increased taxation, regulation and the general overreach of government. Everyone is told that they must work and produce for the "good of all". Of course, only the government decides what is good and what is fair.

Elizabeth Warren sounds like she wants to create a nation that is eerily similar to what Ayn Rand wrote about.

What does that nation look like? It is one where a majority of voters no longer believe in personal initiative, freedom, accountability, creativity, rational self-interest and individual incentive as the foundations of success for either themselves or their country.

It will be a dark place (not only due to the fact that Warren wants to ban coal, fracking and new oil exploration) because, as Gramm and Solon point out, "socialism always destroys wealth; it doesn't redistribute it".

Sen. Warren would roll back the economic Enlightenment that gave us private property and economic freedom, and plunge us back into the communal world of the Dark Ages. Like the village, guild, church and crown of yore, government-empowered special interests would once again be allowed to extort labor and thrift. When capital is no longer protected as private property and is instead redefined as a communal asset, prosperity and freedom will be the greatest casualties.


Note the common theme in the three tweets above. All are offering something for FREE.

Nothing is free, most particularly freedom.  I hope you and all your loved ones understand that.

280 character tweets can never tell the tale. What you are seeing from the Democrats above are nothing but fiction and fables. Americans need to understand the full story about what is being sold to them.