The Greatest Fraud of All Time

The greatest fraud of all time is playing out around us every day.

All of of the Democrat presidential candidates are participating in it.

Most every other Democrat politician is as well.

The mainstream media helps to sustain the narrative.

Our educators are complicit in it.

That is why we have scores of young people saying they are "terrified" about their future because of climate change.

We now have a 16-year from Sweden appearing before the United Nations telling world leaders they have "stolen her dreams and her childhood" because they have not done more to combat climate change. She claims that the world "is now in the early stages of mass extinction".


Alexandria Ocasio-Cortez and Pete Buttigieg have even gone so far as to call for actions comparable to what was undertaken to fight World War II to combat climate change.

As I have written before, I find it most interesting that despite what they say, what they do suggests that they cannot possibly believe this blather.

If they really believed that we are heading to mass extinction they should be protesting in China rather than in the United States, France, Sweden or the U.K.

China is emitting almost double the amount of carbon emissions that the United States is.

China uses half of all the coal consumed in the world, which is considered to be the biggest contributor to carbon emissions.

China has half of all of the coal-fired electric generation plants in the world and has been on a furious pace to build new capacity over the last 20 years.

It is currently increasing that capacity by another 15% over the next few years. 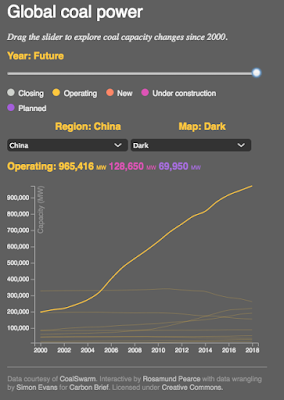 China today has 5 times the coal generating capacity as the United States.

The United States has also shut down 43% of its coal generating capacity in the last seven years. 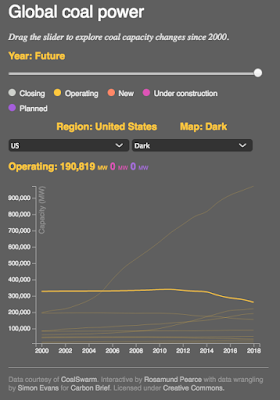 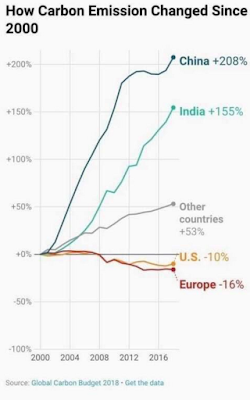 This is what the climate alarmists tell us day after day.

The fact is that they are not.

However, this is where the fraud comes in.

There is a concentrated effort to make you believe that temperatures are rising even when that is not true when you look at real climate history.

As an example, here is summary of the graphs in the  most recent National Climate Assessment that went out to policy makers and journalists. It shows that temperatures are rising, wild fires are increasing, sea levels are rising and Arctic Sea ice is decreasing. 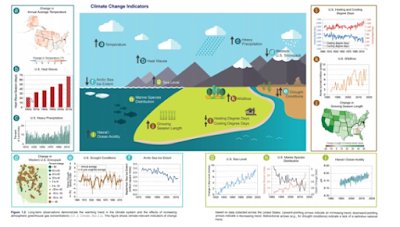 Tony Heller of RealClimateScience.com recently did a video by taking the data and charts in the National Climate Assessment to show how massive the fraud that is being perpetrated on us is.

The key point that Heller makes is that for each of the data points the National Climate Assessment uses, different starting points are used in order to make it appear that climate change is real and it is being caused by man. The starting point of their graphs is always chosen to make the case they want to make while ignoring the actual long-term history.

For example, the graph showing increasing temperatures measured by heat waves begins in 1960. This makes it look like we are seeing unprecedented heat in the United States. 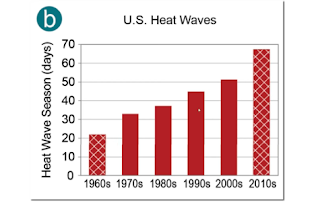 However, Heller points out that they are hiding the period before 1960 where we had much warmer temperatures than we do today.

Heller shows what is being hidden by overlaying the above graph over a chart that shows the entire heat wave magnitude index back to 1900 (see chart below).

It is as if the period before 1960 did not exist in the National Climate Assessment. Is this the way science is supposed to work?

Do you see why they started their graph at 1960? It was a low point for heat waves.

The chart would look a lot different if it started in 1936. 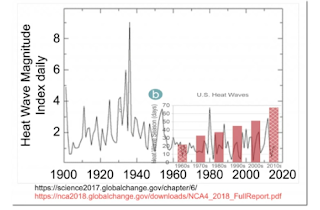 Compare the heat wave activity in the United States to carbon emissions in the graph above between the years 1900-1960. We had much hotter weather in that period than today with only a fraction of the carbon emissions

Heller points out similar manipulations with all of the data in the Climate Assessment.

It would be one thing if there was no data before those dates. However, that is not the case. They are cherry-picking the data to support their conclusion rather than looking at the actual climate science data.

I don't know how you can call it anything but fraud.

I highly recommend that you view the entire video. It is an eye-opener if you want some real perspective on the climate change debate. It is well worth the 12 minutes of your time.

Click here if the embedded video does not open with your browser.


I am not a climatologist or meteorologist. However, I consider myself a practical thinker who makes decisions by looking at facts. I have also learned that it is always important to look beyond the "facts". How are the facts packaged and what is the motivation of the messenger?

I also know that energy drives economic output. It is not a coincidence that the growth in global GDP almost exactly tracks the growth in energy usage. 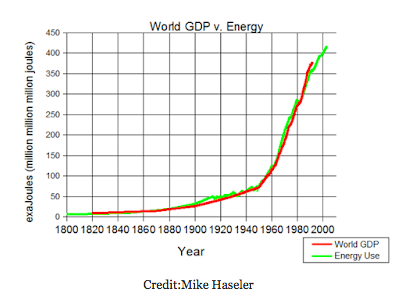 Therefore, we better be darn sure that before we give up our coal, oil, natural gas and nuclear energy sources that we really need to KNOW the facts rather than think them, believe them or wish them to be true.

If not, we could be putting our lifestyle, our livelihood and our very lives at risk for nothing more than a high-stakes con game.

I am always open to new facts. However, no one should be ignoring facts and historical records that are in existence that might suggest a theory or viewpoint may be wrong. When those facts are purposely hidden to convince others that the "science is settled" it can only be considered an act of fraud.