As Hurricane Dorian threatens the United States you will probably hear someone try to connect this hurricane activity to climate change.

We are hearing the same thing about the fires in the Amazon.

We heard the same thing when the East Coast of the United States had a few days of temperatures above 90 degreesF earlier this summer.

The climate alarmists always want people to believe that events like these are unprecedented and have to be the result of carbon emissions, global warming and climate change.

The sad fact is that many people, especially Millennials or those in Generation Z, have no perspective of history or are unable to put these current events in the proper context. As I often say in these pages, context is everything when assessing anything.

Let's put some of these claims in context.

What about summer heat?

It is always hot in the summer.

However, we are seeing fewer hot days (over 90 degrees) in recent years compared to what we have historically seen in the United States.

Recent years are nothing compared to what we witnessed in the 1930's when no one blamed carbon emissions or climate change for the heat. They blamed the weather---PERIOD. 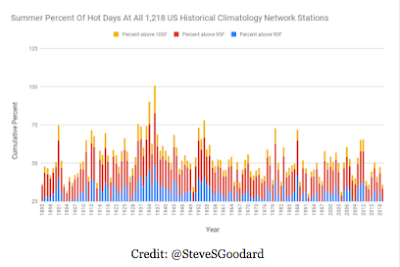 Can you imagine the hysteria and call for action on climate change if we saw anything close to the conditions that created the Dust Bowl in the 1930's?

What about the Amazon fires? Last year it was the fires in California that the climate alarmists were pointing to as unprecedented.

The fact is that forest fires have always been with us.

It is also a fact that in recent years (according to NASA data) forest fires around the world have been in decline.


Another surprising fact is that there is actually more forested land on earth today than there was 35 years ago according to this article in Forbes.


For the last 35 years, the world has been re-foresting, meaning new tree growth has exceeded deforestation. The area of the Earth covered with forest has increased by an area the size of Texas and Alaska combined.

Less land is being converted into agriculture globally in part because farmers are growing more food on less land.

This chart from Mongobay.com provides the background and context on historical fire hotspots in the Brazilian Amazon. 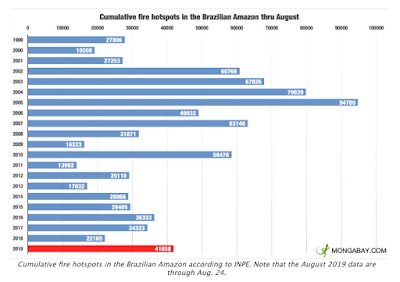 The trend in major hurricanes making landfall in the United States has also been in decline as this graph by Dr. Roy Spencer illustrates.

The United States actually went 13 years (2004-2017) without one Cat 3+ hurricane making landfall before Harvey and Irma (2017) and Michael (2018) broke that streak. That is the longest period in history without a major hurricane striking the United States.

The claims of the climate alarmists simply do not match the actual facts and history of hurricane activity.

That is not to say that these storms are anything to trifle with. They are dangerous and they pose massive risks to the life and property in their path.

I was in Panama City, Florida last February a few months after Michael wreaked havoc to that area. The damage from that hurricane was massive. Here is a photo I took from my car that shows an example of what the wind and water did to a residential area. There were scenes like this for mile after mile. Driving along I-10, 50 miles or more from the coast, there were thousands of trees that had been snapped in two and scores of steel billboards twisted out of shape.


Let's hope Dorian stays off shore and weakens so it will not pose the type of threat that Michael, Irma and Michael did in recent years.

However, whatever happens with Dorian, do not buy into the hype.

Driving an electric car and boycotting meat is not going to stop the heat, the fires and the hurricanes.

Passing a Green New Deal is not going to make one iota's difference in the climate or the weather.

There are facts and there is fiction and fantasy.

When do you ever see the facts and history I have outlined above when these stories are hyped by politicians or the media establishment who are pushing an agenda?

Consider the context and it is easier to find the truth about anything.