A Lot Can Change In Two Generations

The ethnic make-up of the United States did not change a great deal in the first 200 years of the nation's existence.

If anything, it might surprise you to learn that the Black population in 1790 was much higher than it is today in percentage terms.

By the time of the Civil War, the White population had increased to 86% and the Black population was at 14%.

By 1870, the White population was 87% and that percentage did not vary from that level by more than two points for the next 100 years.

What really altered the ethnic make-up of the United States was the tremendous influx of people of other races and ethnicities to the country beginning in the early 20th century.

This trend accelerated as transportation alternatives widened in the mid-20th century.

Only 1.1% of the United States was populated by those other than White, Black or Native races in 1910.

Let's put that into perspective.

In two generations, the share of people in the United States that are Hispanic, Asian or from other races has gone from under 4% to over 33%.

I doubt that any major country in the history of mankind has gone through a larger transformation in its ethnic composition than the United States of America over that short a time period.

If you doubt how quickly this transformation has come about, and how the trend is accelerating even faster due to demographic forces, look at the graph below that shows the changes in public school enrollment by race/ethnicity since 1995.

Whites are already a minority (47%) in public school enrollment in the United States. 2/3 of public school students were White in 1995. 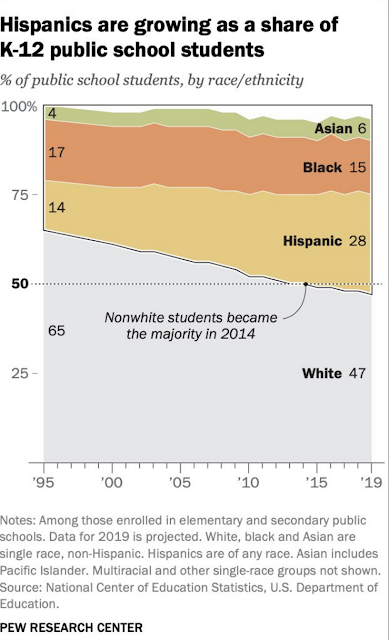 By 2044, it is projected by the U.S. Census Bureau that Whites will be a minority of the total population in the United States. 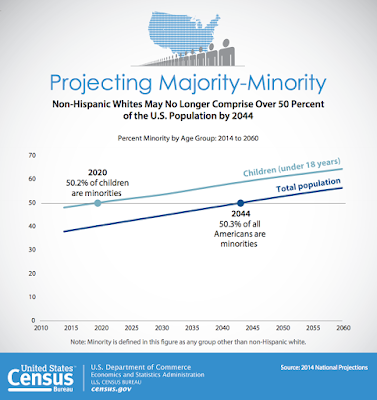 This may occur even earlier once new projections are done after the 2020 census is completed.

One of the more interesting datasets  the Census Bureau produces is one that shows the component changes by race and Hispanic origin comparing the most recent population estimates to the 2010 census totals.

The population of the United States is estimated to have grown by 20 million between 2010 and 2018.

The white non-Hispanic population is estimated to have grown by only 219,000 out of that total population increase of 20 million between 2010 and 2018!

In other words, 99% of the population increase in the U.S. since 2010 has been in minority populations. 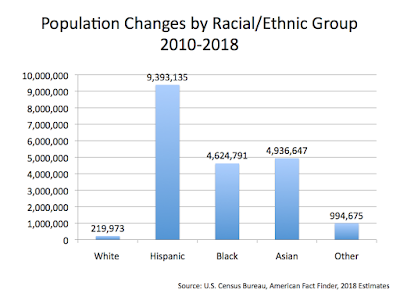 As meager as the growth of the non-Hispanic White population has been in the last decade, the reality is that this may be the last time we see any growth at all in this population in the United States. It is projected that the White population will decrease by 19 million people (from 198 million to 179 million) over the next 40 years.

No matter what your views on immigration, the numbers and the transformation in the racial and ethnicity composition of the United State in such a short period of time is remarkable.

The United States is a nation of immigrants. Those immigrants (and their descendants) created the greatest country in the history of the world.

The question that remains is whether the immigrants of the last 50 years will be able to sustain what they found when they got here? Might they be able to attain even more? We will know more in another two generations.