What Next With Iran?

Iran has effectively been at war with the United States since 1979.

Iranian protestors stormed the U.S. Embassy in November, 1979 and took 52 American diplomats and citizens as hostages.

They held those Americans as hostages for 444 days until they were released right after Ronald Reagan was sworn into office in January, 1981.


During the past 40 years Iran has sowed discord across the Middle East and been the principal state sponsor of terrorism in the world.

The architect behind that terrorism was Qassem Soleimani who was the Major General in charge of the Islamic Revolutionary Guard Corps and commandant of its Quds Force which has specific responsibility for extramilitary and clandestine operations.

Soleimani met his demise last Friday in Iraq when U.S. predator drones targeted his convoy right after he disembarked a plane he had flown into the Baghdad airport from Syria.

What I found remarkable was how effectively U.S. intelligence had been in tracking Soleimani. It was also interesting that Soleimani had apparently believed he was not at risk by the fact that he travelled so openly between Syria and Iraq and with so little security surrounding him.

I also found it astonishing that Obama's former National Security Advisor made this admission on MSNBC when commenting on the death of Soleimani. 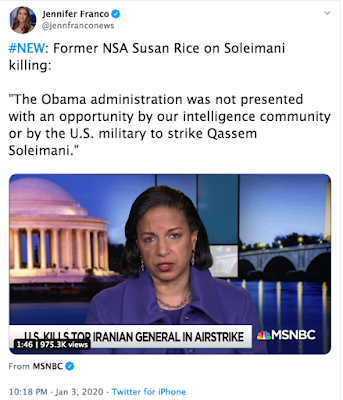 Seriously? Is she saying that in eight years the Obama administration did not have one opportunity to take Soleimani out? However, Trump's intelligence and military resources did the job in less than 48 hours after the Baghdad embassy was stormed?

Let it not be forgotten that Susan Rice also was trotted out on the news shows after Benghazi and blamed it all on a video that she said made the Islamists mad at us.

Let me say at the outset that I am not a Middle East policy expert nor I have studied the Persian mindset extensively. However, I think even a casual observer can see how unhinged the reaction on the left is to President Trump's decision to target Soleimani. World War III was one of the hashtags trending on Twitter in the day following.

Of course, 48 hours before that the same people were saying that Trump was weak and ineffective for not doing something as the Iranian sympathizers attacked the U.S. embassy. They were calling it his Benghazi.

I can assure you that Soleimani was not flying between Syria and Iraq to broker peace agreements in the Middle East. He was doing the same thing he had been doing for over 20 years in the region---working on plans to sow discord and wreak havoc.

Why do people think Iraq has been in constant turmoil since U.S. forces toppled the regime of Saddam Hussein? It is because of Soleimani and Iran. Most of the deaths and mutilations of American soldiers in Iraq can be traced back directly to this man.

It needs to also be remembered that Iran has been anxious to antagonize the United States for a long time.

The Obama administration elected to try to buy off the Iranian regime with a nuclear deal in 2015. However, that deal only delayed Iran from building a nuclear weapon. Under its terms, Iran would have the full right to have unlimited centrifuges by 2025 and unfettered uranium enrichment by 2030.

The agreement also lifted economic sanctions on Iran. This had the direct effect of giving Iran access to money in various bank accounts around the world that had been frozen due to the sanctions. President Trump claims it totaled $150 billion. Other observers have said it was as low as $50 billion. In any event, it was a lot of money that Iran did not have access to before. The United States also directly transferred $1.7 billion in cash as reported in this LA Times story in 2016. Some might call that a quid pro quo today.

The Obama administration is acknowledging its transfer of $1.7 billion to Iran earlier this year was made entirely in cash, using non-U.S. currency, as Republican critics of the transaction continued to denounce the payments.


The temporary nature of the nuclear limits and the massive financial advantages in the deal for Iran were the main reasons President Trump campaigned against the agreement and stated that he would walk away from the agreement as President. This was easy to do since President Obama never had the deal blessed by the U.S. Senate, which he could have done. Why did he not do it? Because he knew he could not get it ratified as a treaty.

President Trump reimposed the sanctions and Iran has been feeling their effects since.

In the meantime, the Iranian people are getting tired of their harsh regime. Protests have become a regular occurrence across the country. Soleimani's security forces have been charged with pushing back on the protestors. Recent protests began after Iran raised gasoline prices in the country by 300%.
The United States estimates that a least 1,000 Iranian protestors have been killed by the government, thousands wounded and 7,000 jailed in the last two months according to this Reuters story.

It should also be remembered that over the last year Iran has attacked and seized oil tankers, attacked Saudi oil plants, downed a U.S. drone over international waters and launched rockets at bases in Iraq where United States personnel were present.

President Trump did not respond until a U.S. contractor was killed by one of those rockets. He hardly was itching for a fight with Iran. In response, he ordered a measured strike at an Iranian controlled base in Iraq.

Iran then ordered the attack on our embassy in Baghdad.

If one thing is clear it is that Donald Trump will not sit idly by while American interests and lives are attacked. I should think Iran understands that now.

What is next with Iran?

I believe that is totally up to Iran's leadership.

President Trump has been very clear for years that he does not think much of being entangled in the Middle East. I have no doubt he would like to be completely out of the Middle East if it could be done. However, he inherited a monumental mess that is not easily unwound.  He certainly has no interest in war in the Middle East or with Iran.

Iran must decide whether they want that themselves.

Iran's mullahs are undoubtedly in a tough spot. Their economy is in shambles. Their people are in open rebellion in the streets. Their top enforcer and the man who spread terror throughout the region is dead.

Do they double down and pursue further attacks on the United States?

By doing so, they risk their own positions of power because they have to know now that Trump will not look the other way as the United States has done in the past. It also cannot give them much comfort that U.S. intelligence had so easily tracked Soleimani.

How do they save face if they don't do something? What message does that send to their own people in the streets where they are already vulnerable?

Iran may have miscalculated in poking the bear one too many time.

For now, Iran seems to be moving more carefully but also trying to manage the expectations of those on the street.

Many argue that Trump does not know what he is doing. They continually try to paint him as unthinking and reckless.

However, as I have analyzed Trump's decisions (both in business and as President) I see someone who calculates everything he does. He also invariably makes decisions that are anything but reckless or ill-considered. Yes, he may say something outrageous but when final decisions or deals are made they are backed by good reasoning. The Left may not like the reason, for example the appointments of Gorsuch and Kavanaugh to the Supreme Court, but those were both pragmatic and practical choices.

There is no doubt that Trump likes to do deals but he undoubtedly knows that there are some people (or nations) that you simply can't make deals with no matter how hard you try.

Great Britain found that out in trying to appease Hitler in the late 1930's.

It is the way it is and it is particularly true in the Middle East where their value systems are so at odds with our own.

Robert Nicholson provided the best explanation I have seen in a thread on Twitter as to why the Soleimani strike may actually be the best path forward. 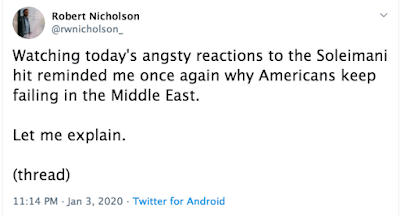 A few excerpts from that thread that I thought were particularly insightful.

1. One common response I see: "Soleimani was bad but taking him out requires a comprehensive strategy. Cycles of violence will solve nothing. We need a path to peace. We must address the causes of terrorism. We need a plan to win this war and achieve a state of lasting justice."

2. To think the US can come up with (and impose) a comprehensive strategy to stop a multifaceted regional war is the height of ignorance and hubris. The Middle East will be plagued by conflict for the foreseeable future regardless of our well-laid plans. That's for starters.

3. It's possible -- now hang on folks -- there will be no peace in the Middle East for awhile. Americans eager for a grand settlement that puts every man at ease beneath his own vine and fig tree need to manage their expectations. We want justice, but it's not really up to us.

4. There is no strategy for peace, only tactics of power. "Cycle of violence" is just the way things work. Groups compete in low-intensity, tit-for-tat skirmishes rather than large conventional wars. You kill my guy, I kill yours. Stronger side wins, other side settles.


So true. Real wars only end when one side is beaten into submission and must settle for what they can get.

This is how Nicholson concludes the thread. He sees only three options going forward. Invasion of Iran. Complete U.S. withdrawal from the Middle East which he questions ethically knowing it will probably mean more violence and killing without the U.S. presence. Finally, wielding power where necessary to restrain the bad actors, mitigate the chance of total war and support our allies in the region.

9. Absent shared values, power prevails. Competing narratives cannot reason from common principles. You can try to change the other's narrative but good luck. Better to obey the logic of limits: strike a balance, define boundaries, and enjoy the silence that stalemate brings.

10. It may seem counterintuitive that smarter use of power is the best path to peace but I can say from experience on the ground that somehow it works. I could make the Christian argument for why but maybe another day. Basically power equilibrium breeds stability and pluralism.

11. Ultimately this requires the occasional use of overwhelming violence. Wise statesman will be careful when and where they use it, but even the wisest cannot predict how the other side will react or when the cycle will end. Their wisdom lies in knowing the rules of the game.

12. We pride ourselves on grand strategy but fail at basic tactics. In the chaotic and unpredictable Middle East, mastery of "cycle of violence" tactics is unfortunately the starting point for any successful strategy.

It's also weirdly the best way to break the cycle.

It seems that the ball is in Iran's court as to what comes next in that cycle of violence. We can only pray that they choose wisely.