A Most Momentous Week

In over 230 years of the nation's existence we have only witnessed it twice before.

In that time we have had 45 Presidents.

We have had 116 Congresses.

We are about to see a Senate trial on impeachment.

The coming week should feel very momentous and grave.

The U.S. Constitution grants an impeachment power to the House and the responsibility to hear and try the charges to the Senate if the President is involved in treason, bribery or other high crimes and misdemeanors such that the public trust had been violated or abuse.

Does this moment feel momentous and grave to you?

Did House Speaker Nancy Pelosi give you that feeling last week when she signed the Articles of Impeachment with souvenir pens that she passed out to fellow Democrats?

Does this look like a sober and serious moment in the history of the United States?

How about Pelosi fist bumping Bill Maher on his show on HBO after Maher thanked her for "waiting until we got back on the air before you started the impeachment". (Maher had been on a two month vacation).

Of course, all of this was after Pelosi waited almost a month to sign the Articles of Impeachment and transmit them to the Senate for a trial. This was after stating in December that Trump had to be impeached immediately because of the imminent and existential danger that existed for the nation if Trump remained in office one more day.

Does this seem more like a circus act than a solemn responsibility?

I can't help but notice how little most Americans seem to care about what is about to begin this week.

Perhaps it is because they do not believe that the President has violated their trust.

If people believe that the President has abused the public trust you would think we might see some evidence of that fact in other indicators?

You would think it might be evident in the stock market.

Where is the DJIA?  Closing in on 30,000. It is up over 60% since Trump was elected President. It is up over 2400 points since the impeachment inquiry began in late September. Notice that the stock market dropped right after Pelosi announced that the impeachment inquiry was going forward but it quickly recovered as an assessment was made about the substance of the charges against Trump became known.

You would think you might see it in Trump's approval ratings.

Rasmussen had Trump at a 51% approval rating the day after the Articles of Impeachment were delivered to the Senate.

Let's put that in context. That approval rating is higher than it was the day Trump was elected.

It is also 5 points higher than Barack Obama had on the same day of his Presidency. 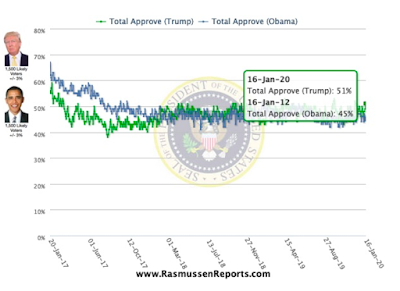 Is this about public trust or is it that Democrats simply don't trust their ability to win a political battle with Donald Trump in 2020?

Donald Trump was impeached in the House without one Republican vote. He was impeached with 230 Democrat votes on "abuse of power" and 229 votes on "obstruction of Congress".

You get a better perspective on where all this is coming from when you look at this map of where Democrat and Republican members of Congress are from that I posted right after the 2018 mid-term elections.

Consider that 69 out of 230 votes (one-third) to impeach Trump came from representatives from just two states--California and New York. 20% came from California alone.

Adding the House Democrat reps from the Chicago, Detroit, Miami, Philadelphia, Boston and New York metro areas (outside of New York state) brings the total to over 50%. 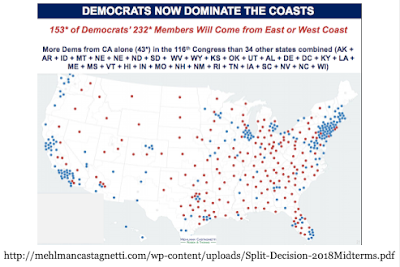 The Democrat party has become a party of the coasts and big cities. Nothing more.

I still find it incredible that California alone has more Democrats in Congress (47 at last count) than 34 other states have in TOTAL. (Note: The chart above was drawn before all of the contested races in California were determined. It shows Democrats with 43 seats. They ended up with 47.)

The Democrats like to complain about using the electoral college to elect the President. How is that any worse than having representatives from a couple of states and several big cities attempting to reverse the last Presidential election.

Even worse, at this point just a little over nine months until the election, why not trust the voters to remove Trump if he has violated or abused the public trust?

Pelosi already told her colleagues they couldn't risk that. She said it would be "dangerous to let voters decide" because the President is "jeopardizing the integrity of the 2020 election." Really?

I don't know what to expect in this most momentous week to come.

Will the House managers appointed by Nancy Pelosi to prosecute the case against President Trump do any better job at the Senate trial presenting the evidence than was done in the House committees?

Here are the House impeachment managers who will bring the case for impeachment before the Senate. You should know a lot more about them by the end of the week. 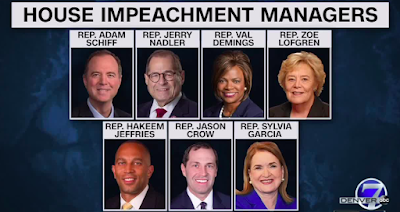 In looking at their backgrounds it was interesting to me that only Adam Schiff has any experience as a prosecuting attorney in their prior careers. What legal experience they have has generally been as associates with law firms dealing with corporate issues. Val Demings isn't even an attorney although she was the Police Chief in Orlando.

Contrast the House group with Trump's legal team that will defend him in the Senate trial. 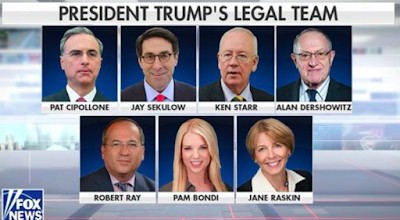 Most of those in this group served as prosecutors at one time in their careers. Starr was the Solicitor General of the United States as well as the Independent Counsel investigating President Clinton. Ray once also served as Independent Counsel. Bondi was a prosecutor as well as Florida's Attorney General. Cipollone is the White House Counsel and was previously a partner in one of the nation's largest law firms. Raskin formerly worked for the Justice Department and has a long record as a  criminal defense attorney. Of course, Alan Dershowitz is the famous Harvard law professor who is also known for his contribution on O.J. Simpson's defense team.

Nancy Pelosi says that the House has an "open and shut case" against the President. The Democrats better have that considering the imbalance I see in comparing the legal talent on each side

It will be interesting what twists and turns the trial takes. Will a motion to dismiss come early in the process? Will the Democrats behave respectfully or just try to make it a political spectacle? Will other witnesses be called? Does Trump have a surprise in store? He usually does.

One thing you can count on is one of the President's defenders in the Senate will rise at some point and make an impassioned speech with words like this.

It has shaken me that we stand at the brink of removing a President — not because of a popular groundswell to remove him and not because of the magnitude of the wrongs he’s committed — but because conditions in America today has made it possible for a small group of people who hate the President and hate his policies to very cleverly and very doggedly exploit the institutions of freedom that we hold dear and almost succeed in undoing him.


How am I so certain that these words will be spoken on the Senate floor?

Because they already have been.

These are the words in a statement given by Senator Chuck Schumer on February 11, 1999 the day before the Senate vote that acquitted Bill Clinton on his impeachment articles. The same Senator Schumer who is the Minority Leader for the Democrats today and who is now arguing just the opposite when Donald Trump is President.

History does not just rhyme. Sometimes it really does repeat.

If only the politicians like Schumer could remember that and keep their stories straight when the wheel of history returns from whence it came.
Posted by BeeLine at 8:02 PM