I often wonder how long it is going to take for California to descend into total anarchy and chaos.

Headlines like this tell me that it is coming sooner rather than later.

The full story is from KRON4.com in San Francisco.

Starting next school year, it will be illegal for public schools in the state to suspend students in first through fifth grade for willfully defying teachers or administrators.

Then, from 2021 through 2025, it will be temporarily extended to kids in grades six through eight.

Supporters say suspensions for willful defiance are disproportionately used against students of color.


Suspensions for willful defiance are disproportionately used against students of color?

What if the acts of willful defiance are disproportionately perpetrated by students of color?

Whites only comprise 23% of the enrollment in California public schools.

Students of color make up 77% of the enrollment. It is probably higher in the elementary grades than that due to the trend of the last decade with fewer white births and more immigrants entering the state.

Here are the total suspensions in California public schools in the 2018/2019 school year broken down by ethnicity. 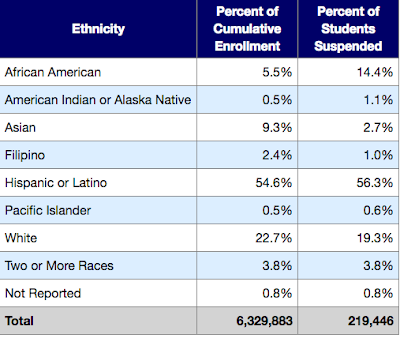 Is it all students of color that are disproportionately being suspended or just some groups?

Why do Asians have such a low suspension rate relative to their enrollment numbers? Why do Filipinos? Aren't they also students of color?

Is it possible that the students who are willfully defiant in school might somehow lack proper parental guidance and discipline at home?

Might that be more likely in the case of single parent households?

Here are the most recent percentages for out of wedlock births to mothers in California by race/ethnicity.

I don't care if a kid is white, black, brown, yellow, orange, purple or indigo. If a student is willfully defiant of a teacher they should be subject to discipline that includes suspension.

I can guarantee you that this new policy will only lead to bigger problems down the road for California.

Is it merely a coincidence that the same week I am reading about California lawmakers passing laws that don't allow schools to suspend students for willfully disobeying teachers, I also see this headline?

I also came across this video that went viral on Twitter of some young people brazenly shoplifting clothing in a Sears store in Richmond, California right before Christmas.


Shoplifting has become rampant in California since the state's voters passed Proposition 47 five years ago that makes any theft of merchandise below $950 a mere misdemeanor rather than a felony.

Is it also a coincidence that the shoplifting shown in the video above involved merchandise that would have been valued at less than $950?

FoxNews.com did a recent report on the effects of Prop 47 in the state.

The decision to downgrade theft of property valued below the arbitrary figure from felony to misdemeanor, together with selective enforcement that focuses on more “serious” crimes, has resulted in thieves knowing they can brazenly shoplift and merchants knowing the police will not respond to their complaints, say critics.


All of this has helped San Francisco to have the distinction of now being the city with the highest level of property crime, which includes theft, shoplifting and vandalism, of the 20 largest cities in the United States.

I thought this California business owner summed it up pretty well.

In San Diego County, 7-Eleven franchise owner Jassi Dhillon told NBC 7 that he has to deal with shoplifters at all six of his store locations.

"It's happening every day, hour by hour," he said.

Dhillon said shoplifting isn't a priority to law enforcement and said when cops do show up, the shoplifter has left the store or isn't concerned about the citation they are issued.

"It's becoming a lifestyle for us now because we can't do anything much except take the loss," he said.


What is most interesting to me in all of this is that we are often told that we are supposed to look to California to the enlightened, progressive way the country should be run in the future.

Nancy Pelosi, Adam Schiff and Gavin Newsom are quick to tell us how President Trump and those of us in flyover country have got everything wrong.

Does California look or sound like any place you really would want to work, live and raise a family?

You can expect that the chaos will only become greater in the future in California.

It is written in the stars  laws that are being passed in the state.
Posted by BeeLine at 8:53 PM