Skin In The Game

A favorite line of the Democrats is that Donald Trump cares about nothing as President except enriching himself.

He is portrayed as being in it solely for himself. They argue that does not care for the country in the slightest.

They have tried to argue he has violated the "Emoluments Clause" in the Constitution because government worker or foreign diplomats might stay at one his properties.

They say that even though President Trump is not taking one penny of his Presidential salary of $400,000 per year.

They say that despite the fact that Forbes estimates that his net worth has declined by $1.4 billion since he first announced he was running for President in 2015--- from $4.5 billion to $3.1 billion today. All in all, Trump has dropped 119 places on the Forbes 400 list since he became President.

Not that Trump’s fortune is static. His branding businesses, for instance, are in steep decline. Real estate developers are no longer signing up to put the Trump name on their properties, and existing customers have scraped the brand from projects in places like Toronto and Panama. Forbes estimates that Trump’s real estate licensing business, which is further limited by his pledge not to do foreign deals while in office, is worth about $80 million today, down from $170 million a year ago. Meanwhile, the value of the president’s product licensing operation—which earns money by putting the Trump name on goods such as shirts, ties and mattresses—is approaching zero. In 2016, before Trump became president, it was worth an estimated $14 million.


The claims of Democrats just do not square with the facts. Donald Trump did not need to be President in order to live a spectacular lifestyle. He already enjoyed the luxuries that most occupants of The White House only experience the first time when they live there.

If Donald Trump ran for President because he wanted to enrich himself or burnish his brand, he made a very bad decision.

In addition, take note of the net worths of politicians like Clinton and Obama when they were first elected President, and what they are today. Who enriched themselves by being elected President?

Let's look at one more item and you tell me whether Donald Trump is in this job for himself.

Last week President Trump ordered the killing of  Iran's General Qassem Soleimani who was the architect behind most of the terror and mayhem in the Middle East.

Trump knew that this would give rise to a strong reaction and calls for revenge from Iran.

Iran has already put a $80 million bounty on his head.

Trump has a large family with adult children who are very visible and often in the public eye. He still has one minor child in middle school.

Trump has hotels and buildings that he owns or his name is on around the world. In fact, an Iranian official has already threatened these properties. It should not be forgotten that the standard insurance policy on property also has an exclusion in it for acts of war or terrorism.

Considering all of the above, if you were in it for yourself, would you have made the decision to confront Iran for its recent aggression in Iraq and elsewhere as Trump did?

How easy would it have been to ignore everything Iran was doing and keep your head low? After all, this is an election year and Trump may not even be in office in another 12 months. Why risk so much personally?

Can you cite any President who put more of himself on the line personally than Trump did with the Soleimani decision?

Say what you want about Trump. You may not agree with his decision but you cannot say he lacks the courage or the ability to make a tough call. He also is clearly not considering himself, his family or his wealth ahead of his country in that decision.

I have always found it wise for those who worked for me, with me, or on my behalf, to have some skin in the game. I like knowing that their interests are aligned with mine and they have a vested interest in our shared goals and objectives. 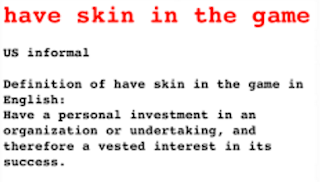 Does anyone have more skin in the game regarding Iran than Donald J. Trump?

Who is talking about this?
Posted by BeeLine at 5:47 PM