A continuing theme that the Democrats have used against Donald Trump since he was elected is that he is using his office to advance his personal goals and financial interests. They consistently say he  is putting his interests above the interests of the  United States of America.

What is their core argument on impeachment? He pressured Ukraine and withheld foreign aid because he wanted them to investigate his political rival Joe Biden. They completely ignore the facts that corruption has been rampant in Ukraine for years and the suspicious fact that  his son, Hunter Biden, was paid millions of dollars as board member in Ukraine at the same time that Vice President Biden was responsible for overseeing U.S. aid to Ukraine in the Obama administration.

It has also been reported that Hunter Biden leveraged his father's position for business deals with many other countries that put a lot of money in his pocket. The same was true for other members of the Biden family. Hunter Biden also got seat on the Amtrak board. His experience to do that--"he had spent a lot of time on Amtrak trains".

Democrats shrug their shoulders and say it is just nepotism. It is just the way it is. Think for a minute if Donald Trump's sons announced a deal for a new real estate development in Shanghai, Moscow or Kiev? Would that just be called nepotism? Have the Trump's been able to do any significant deals since their father became President? Absolutely not because they would be put under the media microscope on anything they did. The double standard that applies as between Trump and Biden is outrageous.

Donald Trump did not need to be President in order to live a spectacular lifestyle. He already enjoyed the luxuries that most occupants of The White House only experience for the first time when they live there. If Trump ran for President because he wanted to enrich himself or burnish his brand, he made a very bad decision.

Let's compare Trump with "Middle Class Joe" Biden and see who has really enriched themselves (and their families) from public service.

Joe Biden was first sworn is as a United States Senator in 1973 at the age of 30. He held that office for 36 years before becoming Vice President under Barack Obama for eight years ending in 2017. Joe Biden did nothing but receive a federal government paycheck for 44 years.

Biden has always tried to portray himself as the blue collar, working man's friend with humble roots from Scranton, Pennsylvania. He likes to call himself "Middle Class Joe".

You might wonder how this man of humble origins, who also did nothing but take a public paycheck for 44 years fared in his first two years in the private sector?

I was curious so I recently took a look at Biden's tax returns for the last several years. His 2015 tax return can be found here.

Biden reported total income of $396,552 on his joint return with his wife Jill in his last year as Vice President in 2016.

In 2018, the Biden's income decreased to $4,580,459. I am guessing that Joe scaled back his speaking engagements, lobbying and consulting gigs as he already had his eye on announcing his Presidential campaign. After all, if you are going to run as "Middle Class Joe" it probably does not make sense to have a tax return showing an eight-figure income. Keep it to seven-figures or less. 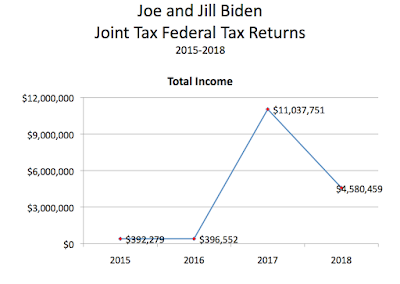 How did Joe come into all of this income? Who paid him? What did he do?

The bulk of it is somewhat of a mystery based on his tax return filings. He used some intermediary corporations to hide the answers. The financial disclosure form he was required to file when he announced is candidacy for President answers some questions, but not all.

Biden clearly was getting paid for speeches. Look no further than what former Presidents like Clinton, Bush and Obama have gotten paid for an hour at the podium to know that it pays well.

Biden's campaign states that he has given less than 50 paid speeches since he left office. However, even if we assume he was getting $150,000 per speech, that would only amount to about half of the income that he has reported on his tax returns since he left office. His financial disclosure indicates that he received $1 million in payments for book tour events in 2018 alone.

Biden's tax returns do not provide the information as to the source of most of his income. That is because Biden set up two limited liability companies (S corporations) to shield the sources of his income. That structure also saves Biden taxes. This is how one report described how that works to Biden's advantage.

The Bidens have used their home state’s financial privacy laws to shield his income from public view, by setting up two tax-and transparency-avoidance vehicles known as S corporations.

The money Biden made from book deals and speeches flowed into the S corporations and was then remitted to Biden and his wife as “distributions” rather than salary. When money is funneled through an S corporation, the recipient doesn’t owe Social Security or Medicare taxes on it, nor can the source of revenue be traced. (In addition to the distributions, the Bidens drew relatively small salaries from the S Corporations: under half a million dollars, for which they owed self-employment taxes.)

Biden also reported a salary on his tax returns from the University of Pennsylvania for both 2017 ($371,159) and 2018 ($409,368). Biden is reported to be the Benjamin Franklin Presidential Practices professor at Penn.

The National Review reported that Biden is receiving this salary, that is two-and-a-half times the average Penn professor, despite the fact that he is not even teaching any classes. What did Biden do for the money? The Philadelphia Inquirer reported that is was “for a vaguely defined role that involved no regular classes and around a dozen public appearances on campus, mostly in big, ticketed events.”

Penn might have actually gotten a good deal compared to what other colleges and universities paid Biden for speeches. We may not be able to get info on Biden's speaking fees from his tax returns but some universities have disclosed what they paid Biden in their public filings.

One humorous item I found in the 2017 tax return filing was that an amended return had to be filed over a year after the original return. The original return did not include Biden's income as the Vice President for the first 20 days of the year.

This is the exact disclosure in the amended return on why that was necessary.

They are saying that the U.S. Government did not send Biden a W-2? Seriously?

I think it is more likely Joe lost it.

However, the blame for failing to include this income on the return seems to fall more on the tax preparer. When I prepared and reviewed tax returns for a living I always had the prior year's return in front of me to compare to the current information. If something was on last year's return but missing from the current data my first question was always to ask, "What changed?"

One area Biden has improved on with his higher income is his charitable giving. Biden was famous in the past for his penurious charitable contributions that usually amounted to no more than 1%-2% of his income.

In 2016, Biden claimed a deduction for charitable contributions on his tax return that amounted to just 1.5% of his income. Since he left the White House his giving increased to a little over 8% in 2017 and 2018. Do I dare wonder how much of that increase was due to the fact that Biden knew he was going to run for President and knew that he would be releasing the information? I am not going to do that.

I also don't think it is fair to just make an example of Biden and the tremendous income and wealth that has come his way since he left office.

There is a well-established pattern for a number of public office holders in this regard. Look no further than Bill and Hillary Clinton or Barack and Michelle Obama. The Obama's just bought a $11.7 million summer home on Martha's Vineyard. I have chronicled the income the Clintons raked in a past BeeLine blog post.

It is no different with others who cash in with books, board seats, speeches, consulting or lobbying jobs. It is not just Democrats. Look no further than Republicans like George W. Bush, Paul Ryan, Newt Gingrich, John Boehner, John Kasich or Jason Chaffetz . Or CIA Director John Brennan or FBI Director James Comey. They have all cashed in on some form or fashion on their government service. Most recently, John Bolton wants to cash in with a "tell-all" book.

Biden's former boss, Barack Obama, was known for telling wealthier Americans that they should pay more in taxes. He famously stated in a 2016 speech that "you didn't build that" income and wealth by yourself.

"If you’ve got a business, you didn’t build that. Somebody else made that happen,"


Obama said that a lot of the success  of those who were better off was due to the American system of education, infrastructure and others who helped them along the way. Therefore, they should be willing to pay more in taxes.

This is a particularly popular talking point with Elizabeth Warren  and Bernie Sanders as well.

However, if you think about it, there is no one that argument applies to more than a former public official that goes into the private sector and capitalizes on their name, their contacts and their experience than people like Joe Biden, Barack Obama, Hillary Clinton, Paul Ryan or John Brennan.

In each case, their entire personal career or brand equity has been earned in a public sector job that the American taxpayers paid for. For these people it is really true that "somebody else made that happen." For most, everything that they earn after leaving the public sector would not have occurred but for the taxpayers funding that prior experience.

The Democrats seem to be desperate to raise more in taxes.

My suggestion is that we start first with a surtax on any earnings of former elected or Senate-confirmed executive branch appointments wherein a percentage of post-public sector earned income would be subject to an income tax surcharge.

Doesn't it seem fair that the taxpayers should get some return on the investment they made in Joe Biden over the years that allowed him to be so much in demand by the private sector?

After all, "the somebody else that made it happen" were the American taxpayers.

I can't think of anything that would be fairer when it comes to taxes.

How could "Middle Class Joe" object?
Posted by BeeLine at 6:11 PM