The Senate impeachment trial of President Donald Trump began today. A big part of the Democrat strategy in doing all of this was clearly to create a distraction.

Democrats needed to create another narrative to try to convince voters that Trump is unfit and unworthy to be the President of the United States.

Quite frankly, they have to be very uncomfortable with the success he has had.

I wrote just before Trump was sworn in that, despite what the Democrats said, they were not really fearful that Trump would be a failure as President. There was one thing the Democrats feared the most about Donald Trump.

However, you would never hear anyone admit it.

"Their greatest fear is that Trump will be successful."

If their intent was to diminish Donald Trump by impeachment, and attempting to paralyze Trump from continuing to pursue his policy goals and objectives, it is not working very well.

He attended the BCS National Championship football game in New Orleans a week ago Monday.

Trump did a rally in Milwaukee last Tuesday in which more than 20,000 attended. These are the key stats from that rally as reported by Trump campaign manager Brad Parscale.

Note that 58% of the people who attended were not Republicans. 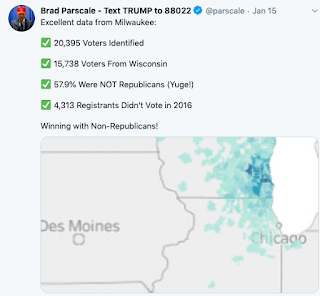 On Wednesday President Trump signed the first phase of a China trade deal. 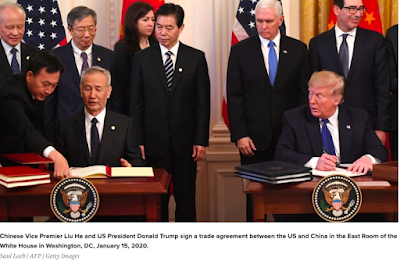 On Thursday the U.S. Senate passed the USMCA trade treaty with Canada and Mexico that will replace NAFTA and sent it to Trump for signature.

On Friday Trump hosted the National Champion LSU Tigers in The White House.


In addition, it was reported by The Washington Post and The New York Time last week that Trump is planning to divert an additional $7 billion in Defense Department funds to further build the wall between Mexico and the U.S. This in keeping with a U.S. Court of Appeals ruling that held that an earlier diversion of Defense funds was permitted under the President's constitutional discretion.

That was quite a week for an impeached President.

In fact, it was quite a week for any President.

On Sunday President Trump was in Austin, Texas speaking to the American Farm Bureau Annual Convention.

That speech coincided with the release of a Farm Journal Pulse Poll that revealed that Trump had an 83% approval rating with American farmers. That is his highest approval rate ever with that group.

On Monday he was paying respects to Martin Luther King, Jr. at the MLK Memorial in Washington, DC.

He was in Davos, Switzerland speaking at the World Economic Forum after flying there overnight.

When Trump last spoke at Davos two years ago many of the business and economic leaders there were skeptical of Trump's plans. The globalists at Davos believed that a nationalistic-centered economic philosophy was doomed for failure.

There were a lot more people in Davos paying attention to what Trump was saying than two years ago. The United States economy has been the envy of the world the last two years.

I doubt many saw or heard Trump's remarks today as all of the media attention was focused on the Senate impeachment trial. It is also rare to see or hear from the media a full accounting of exactly what President Trump has been doing for the American economy the last three years. He outlined some of the successes for the other global economic leaders in his remarks at Davos.

It is worth the time to read the small sample below that I took directly from the transcript of Trump's remarks. I have underlined a few of the key facts about the economy over the last three years if you just want to see the highlights.

America’s newfound prosperity is undeniable, unprecedented and unmatched anywhere in the world. America achieved this stunning turnaround not by making minor changes to a handful of policies, but by adopting a whole new approach centered entirely on the well-being of the American worker.

Every decision we make on taxes, trade, regulation, energy, immigration, education and more is focused on improving the lives of everyday Americans. Only when governments put their own citizens first will people be fully invested in their national futures.

When I took office three years ago, America’s economy was in a rather dismal state.  Under the previous administration, nearly 200,000 manufacturing jobs had vanished, wages were flat or falling, almost 5 million more Americans had left the labor force than had gotten jobs, and more than 10 million people had been added to the food stamp rolls.

The experts predicted a decade of very, very slow growth — or even maybe negative growth — high unemployment, and a dwindling workforce, and very much a shrinking middle class.  Millions of hardworking, ordinary citizens felt neglected, betrayed, forgotten.  They were rapidly losing faith in the system.

Since my election, America has gained over 7 million jobs — a number unthinkable.  I wouldn’t say it, I wouldn’t talk about it, but that was a number that I had in mind.  The projection was 2 million; we did 7 [million] — more than three times the government’s own projections.

For the first time in decades, we are no longer simply concentrating wealth in the hands of a few.  We’re concentrating and creating the most inclusive economy ever to exist.  We are lifting up Americans of every race, color, religion, and creed.

Workers’ wages are now growing faster than management wages.  Earnings growth for the bottom 10 percent is outpacing the top 10 percent — something that has not happened.  Paychecks for high school graduates are rising faster than for college graduates.

Young Americans just entering the workforce are also sharing in America’s extraordinary prosperity.  Since I took office, more than 2 million millennials have gotten jobs, and their wages have grown by nearly 5 percent annually — a number that was unthinkable.  Nobody would have ever thought it was possible three years ago.  A record number of Americans between the ages of 25 and 34 are now working.

This is a blue-collar boom.  Since my election, the net worth of the bottom half of wage earners has increased by plus-47 percent — three times faster than the increase for the top 1 percent.  Real median household income is at the highest level ever recorded.

The American Dream is back — bigger, better, and stronger than ever before.  No one is benefitting more than America’s middle class.

We have created 1.2 million manufacturing and construction jobs — a number also unthinkable.  After losing 60,000 factories under the previous two administrations — hard to believe when you hear “60,000 factories” — America has now gained, in a very short period of time, 12,000 new factories under my administration.  And the number is going up rapidly.  We’ll be beating the 60,000 number that we lost, except these will be bigger, newer, and the latest.

Years of economic stagnation have given way to a roaring geyser of opportunity.  U.S. stock markets have soared by more than 50 percent since my election, adding more than $19 trillion to household wealth, and boosting 401(k)s, pensions, and college savings accounts for millions of hardworking families.

Doesn't all of this make you wonder just what we could accomplish if there was an effort in Washington, D.C. to work together rather than just try to score political points?

As you watch what goes on in the Senate trial consider the utter waste of time, talent and money that it represents. All of this to what end? Is this being done to serve the American people or is it motivated solely by a political party desperate to change the narrative because their worst fears of three years ago have been realized?

Fortunately, President Trump is not letting it distract him from the job he has to do.

The last eight days proves that.

I have just one more question.

When does this man sleep?
Posted by BeeLine at 10:40 PM