We have not only welcomed a new year this week but also a new decade.

It was a most remarkable decade.

This is a chart that shows the unemployment rate trend during the decade. It started at almost 10% and ended at 3.5%. 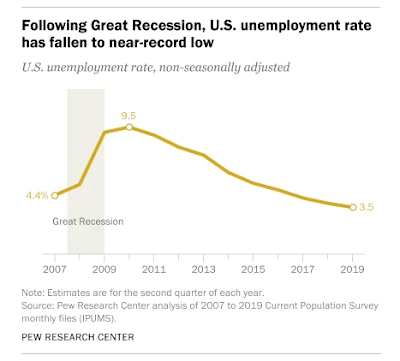 It began with a career politician and liberal Democrat President who spent a lot of his time telling us that the United States was not that great a place to live.

It ended with a businessman and populist Republican President who believes that there is no greater place to live than in the United States of America.

In fact, it is particularly interesting looking at the predictions that Barack Obama's Energy Department made at the the beginning of the decade compared to what actually occurred. These charts are all from an article in Axios by Andrew Witherspoon "The decade that blew up energy predictions".


CO2 emissions were projected to rise. They decreased. 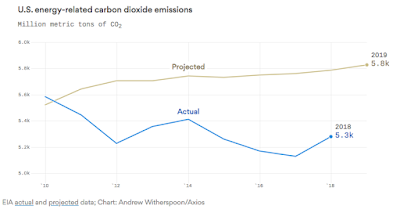 We were supposed to be importing 8 million barrels of oil per day now. Instead, we have become a net exporter of oil. 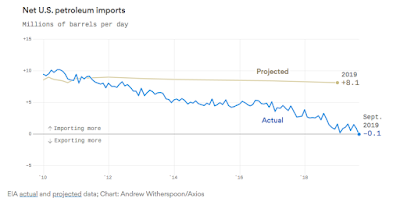 A big reason for this is that U.S. oil production is double what was projected at the beginning of the decade. 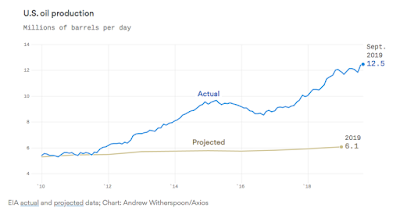 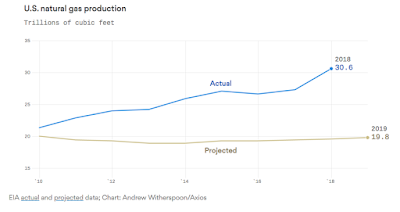 That massive increase in natural gas production has led to this fuel soaring as a source for electricity generation while coal use has plummeted thereby defying the predictions of the Obama Energy Department. 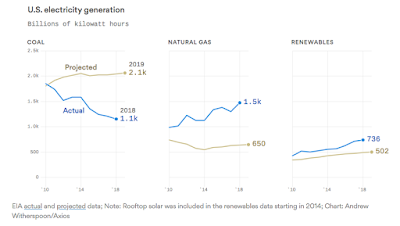 Looking at these charts should also serve to remind us one again to take the predictions of "experts" with a grain of salt.

The decade also began with Americans stating that the two biggest problems facing the U.S. were the economy and jobs.

It ended with Americans citing government and immigration as the two biggest problems. Interestingly, neither the economy or jobs were mentioned by more than 6% of Americans in the 2019 survey.

In fact, the NADAQ did not have one negative year in the entire decade. The Dow and
S&P only had one down year in the decade (including reinvested dividends)---2018.

Look at Charlie Bilello's summary of the NASDAQ over the last 10 years.

It also appears to be the case that the 2010's was the first decade since 1850 (when reliable data is available) that the United States did not experience a recession.

The biggest mega tech trends during the 2010's were the increased use of mobile devices and streaming content.

This graph shows the accelerating use of mobile devices during the last decade. 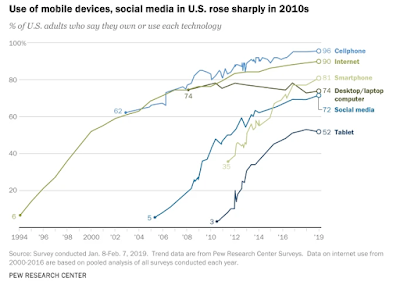 Take a look as well at the dramatic increase in the use of streaming services in the 2010's. 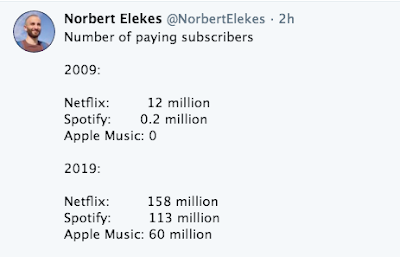 Consider as well that a number of things that we take for granted today that were not in existence when the past decade began.

Tinder and the rise of online dating sites

Lyft (Uber was first introduced in San Francisco in 2009)

Drones that consumers can use

Meatless meat such as Beyond Meat and Impossible Burgers

The best decade yet? There is a good argument to be made for it.

What about the next decade we are embarking on?

The American public is very optimistic as the decade begins. A Rasmussen survey found excitement about the new year at a hew high in their polling. 72% of Americans think it will be a good or great year. That number was only 54% a year ago and 47% in 2015.

I never want to discount the potential of the ultimate resource---human ingenuity and innovation.

However, I doubt that economic cycles are extinct. Bad times have historically followed good times.

And we have been living on borrowed time. We are now in the longest economic expansion in American history.

We have also been living on a lot of borrowed money. Those that rely too much on leverage eventually find themselves on the wrong side of that leverage.

We added over $10 trillion of debt in the last ten years at the federal level. 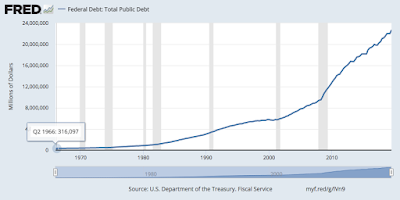 Debt by S&P 500 companies increased by over 50% in the last decade. 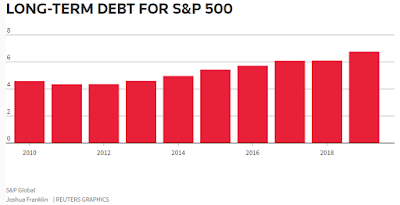 All of this was facilitated by a very accommodative Federal Reserve monetary policy over the last decade and historically low interest rates.

The Federal Reserve started reversing the QE (money printing) in 2018 that it had initiated as a response to the recession only to reverse course in late 2019 and start printing again.

It was no coincidence that the stock market struggled in 2018 as this liquidity was being pulled from the system. The recent Fed action also goes a long way to explaining the late 2019 stock market "melt up".

As a result, the new decade begins on a very precarious precipice of debt as well as political division and uncertainty. President Trump has been impeached by the House and there are currently no plans for a Senate trial. The upcoming national election also looms large on the horizon. The decision that voters make in that election could go a long way in determining how the next decade will unfold.

No matter what happens on the big stage I suggest you take the advice of a great friend of mine and commit to personally making the 2020's "your best decade." Take heed of those things that you have the greatest control of personally and commit to making it great for you.

Happy New Year and  may Your Best Decade be ahead of you!