How Contagious Is It?

The World Health Organization has officially declared that the coronavirus outbreak emanating from China is a global emergency.

Tedros Adhanom Ghebreyesus, WHO director-general, told a news conference in Geneva that recent weeks have witnessed an unprecedented outbreak which has been met by an unprecedented response.

“Let me be clear, this declaration is not a vote of no confidence in China,” he said. “Our greatest concern is the potential for the virus to spread to countries with weaker health systems.”

The declaration of a global emergency triggers recommendations to all countries. It is aimed at preventing or reducing cross-border spread of disease.

Tedros said the WHO was not recommending limiting trade or travel to China due to the outbreak, however.


The WHO may not yet be recommending that travel be limited but it is already taking place. Russia a closed their borders to anyone traveling from China today. Hong Kong did the same three days ago. Other bordering countries such as Mongolia and North Korea have done the same.

Major airlines, including American, United, British Air, Air Canada, KLM and others are no longer flying routes to China.

A 6,000 passenger cruise ship docking at Civitavecchia, Italy was prohibited from having any passengers disembark the ship when a woman from Hong Kong showed signs of the virus. Later tests showed that it was a case of H1N1 flu and the embargo was lifted.

Venues all of China in which large groups of people congregate have closed. Disneyland Shanghai is closed. All 70,000 movie theaters in China are closed. Starbucks has closed 2,000 stores in the country.

In the meantime, China has embarked on a massive quarantine program involving 50 million people.

The human impact of the virus is enormous but if the outbreak of the virus cannot be contained the economic impact will soon add another dimension to the human suffering.

Food shortages are already starting to appear in Wuhan which is the epicenter of the outbreak. The city of 11 million is a virtual ghost town with no activity on the streets. Food is not being delivered and store shelves are not being stocked. Factories are not running. Storefronts are not open. The economic engine of the city is grinding away and it will soon be as big a risk to the citizenry as the virus is.

We often don't realize the precarious perch that our lives are built on. A lot of that is based on the confidence that underlies our economic system. It doesn't take much to disrupt that equilibrium and the confidence that goes with it. When people don't have the confidence to do business, shop, travel and interact, the economy quickly tanks.

For example, look at what has occurred to Hong Kong's GDP since the protests started. 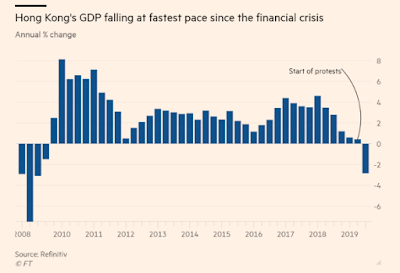 And the protests are small potatoes in comparison to what is going on in China and Hong Kong right now.

We can only hope that one of China's top public health experts is correct when he predicts that the virus outbreak will peak within the next week to ten days.

“I estimate that it will reach its peak in around the next week or 10 days, after that there will be no more major increases,” said Zhong Nanshan, the respiratory disease scientist who played the pivotal role in China’s fight against the severe acute respiratory syndrome (Sars) coronavirus epidemic in 2002-03.


For now, the reported cases continue to increase but the good news is that the rate of increase has slowed the last few days as reported by the The Sydney Morning Herald.

Although more than 1700 new cases were reported on Thursday, bringing the global total to 7700 confirmed cases, the new figure is only a 30 per cent increase on Wednesday's total of 6000 cases.

In comparison, the number of cases confirmed globally increased by about 55 per cent on Saturday and Sunday last week.

It then rose a record 67 per cent on Tuesday this week before the rate of increase began to fall.


Of course, no one knows if this data is reliable. How many cases are there that are not being reported? How much can the Chinese be relied on to be completely truthful on what is the real story?

The key statistic that I want to keep my eye on are the reported deaths from the virus. Those numbers will undoubtedly tell us a lot more about the effects this virus will have on mankind.

After all, if we were to plot the number of cases of the flu in the United States each year we would undoubtedly see a scary graph of incidence. 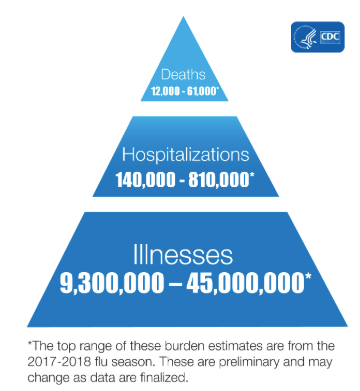 The death rate from the flu is around 1 in 800 cases. More importantly, most people have had the flu and recovered, so it does not produce the fear that an unknown virus can cause.

So far, the death rate from the coronavirus is running at around 1 in every 50 cases (2%). Of course, that assumes the denominator (the number of total cases) is as accurate as the count on the deaths (which I assume is more accurate). That is a lot scarier than a normal case of the flu.

The Johns Hopkins Center for Health Security did an exercise last October in which it modeled the effects of a virulent virus that resulted in a worldwide pandemic. It was a sobering exercise to which we have to hope and pray we never see play out.

However, the beginnings of this viral outbreak in China matched the projections of that exercise a little too close for my comfort. It does clearly show the exponential compounding effects that can occur if a virulent virus is allowed to spread among humans in an unabated fashion.

If the 7,700 cases (and 171 deaths) as of today, that were reported in The Sydney Morning Herald, are accurate we are seeing a slowing of the spread of the virus compared to that cataclysmic Hopkins exercise. I would suggest paying attention to the actual numbers compared to the projection over the next week to get a better sense of where this is going.

The number of cases outside of China will also be particularly important. That will be vitally important to contain the virus and its potential global economic effects.

Notice how important that is because the Johns Hopkins projection that was done for a global pandemic quickly gets to 57 million cases worldwide and over 1 million deaths by February 21 with a 2% death rate assumption.

The bottom line is this. Potential pandemics are nothing to trifle with.

There is a reason that China has acted so aggressively in responding to the virus.

It is already clear that the economic cost of the virus outbreak in China will be significant.

The bigger question is how much of that economic contagion will spread to the rest of the world even if the virus is contained?

China has been leading the world's economy for the last 15 years. A good portion of global growth over that period was due to what has been going on in China.

It used to said that "when the United States sneezes the rest of the world catches a cold."

That may still be true but it may now be true of China as well.

The growth of China's economy and the sheer size of its population means that anything that occurs in China today will invariably have reverberations around the world.

Tuomas Malinen of GnS Economics is already predicting in an article in ZeroHedge that it is probable that the coronavirus will push China into recession this year. If that occurs it will undoubtedly affect the export-and-China dependent Eurozone next. This will then put significant pressure on many European banks that have weak balance sheets.

The final question then is can the United States avoid the economic contagion that might be on our way from China (and Europe) even if the viral contagion can be contained?

The year 2020 has barely started and we have an impeachment trial going on, a potential pandemic developing and an avowed Socialist staring to pull away in the Democrat Presidential race according to recent polls.

Is crazy contagious as well?