This quote has been attributed to many men, including Winston Churchill, John Adams and Benjamin Disraeli, among others.

However, it appears the earliest evidence in which these sentiments were first documented was in 1875 by Anselme Batbie of France.

I think of this quote often as I assess some of the things I see young people espouse today. I also think of my own experience---I was far more liberal in my own thinking when I was 25 than I am today. My views also changed considerably between the age of 25 and 35. There is something to be said that living in the real world can change your perspective on how the world should work.

I can only hope that we will see the same transformation in the young people of today.

Why am I thinking of this right now?

Take a look at this recent survey from YouGov.com which found that 36% of Millennials (ages 23-38) approve of communism. In that same survey last year only 28% said the same thing.

The same poll found that 70% of Millennials say that are likely to vote for a Socialist candidate. 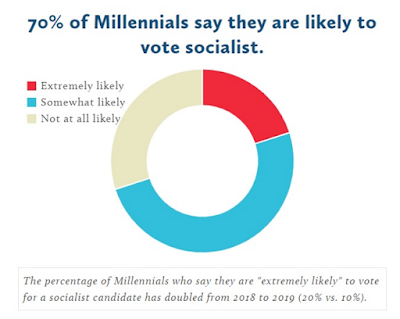 Seeing this I have to wonder what country these Millennials have been living in over the last several years.

I guess they are not aware that the United States currently has the lowest unemployment rate in 60 years, the highest wage growth in over a decade and stock market gains that have put the rest of the world to shame.

It also does not appear they have been paying much to attention to what their age peers in Hong Kong and Venezuela are dealing with right now.

I thought this comment about this poll from former world chess champion Garry Kasporov, who grew up in the communist Soviet Union, was particularly well stated. 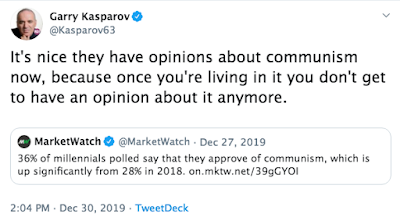 You gain better perspective from where this thinking comes from when you see how different younger people and older Americans view the nation's big problems.

Only 54% of the young see drug addiction as a very big problem as compared to 72% of the old. 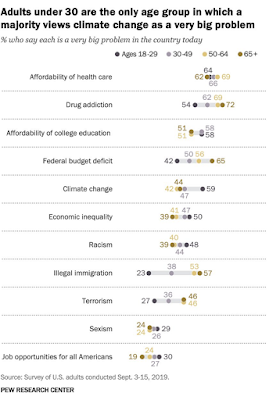 I really had to shake my head when I saw that only 42% of those 18-29 thought that the federal budget deficit was a very big problem. That is the  lowest of any age group. I am wondering exactly who it is they think is going to bear the biggest cost of the federal debt in the future?

These young people don't seem to understand any of this. Do they really think it doesn't cost anything to have an extra 22 million people here who are not supposed to be in the country?

As someone in the more chronologically-advantaged group in this country I can't help but have great concern for the future of the United States when I see surveys like this.

Is there any hope looking out a decade or more in the future with this type of thinking?

I can only pray that the quote above is correct.

Will the young start thinking rather than just feeling as they age?

If they don't, they will feel the effects soon enough. And they will live with it a whole lot longer than anyone else that took that survey.

My advice to younger Americans... be careful of what you wish for.