A little diversion from the impeachment trial since it appears not many people are paying much attention anyway.

The impeachment trial is only getting about half the viewers that the Brett Kavanaugh Supreme Court confirmation hearings did.

However, most of the viewers seem to be keeping up to date on the trial on Fox News Channel rather than on the other cable news networks. I thought this was something that Democrats across the country have been waiting to see for three years? Why are they not tuning in on their favorite cable news channels?

Another question---how does CNN stay in business with these ratings?


Perhaps the following factoids I have come across recently will be a little more interesting than what is going on in the U.S. Senate right now.


Women in the Workforce

Women now make up 50.4% of the workers in non-farm payroll jobs. 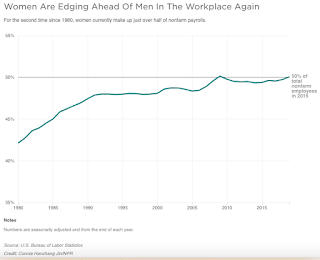 Industry sector where women make up the highest percentage of employment.


The Social Class Gap in Marriage

There is a lot of talk about the wealth and income class divide in the country but you don't hear anyone speaking about the social class gap in marriage. Marriage provides many benefits to society but an important one is that it is provides significant economic benefits to those in the union. Two cannot live as cheaply as one but two living in one household provides significant cost efficiencies.

Another reason that those with less education find it harder to make ends meet is that there is a widening gap in those who are married based on education levels. The gap is also widening with time.

Who is talking about this?

More humans have been in space than have summited Mt. Everest without oxygen or sailed non-stop around the world solo.

Incentives drive results. It is one absolute when considering human behavior.

You provide a 50% incentive for a shot from behind the arc and see what happens. The result--you either fire away from outside or take the layup or short bunny shot underneath. There is almost nothing in between.

Mike Bloomberg is going to spend $11 million on one ad during the Super Bowl.

To put that in perspective, this is what the other leading Democrat candidates have spent on tv advertising thus far in this primary election cycle.

In other words, Bloomberg will spend more on that one 60 second ad than Sanders, Biden and Warren have spent on all their tv ads COMBINED thus far.

Bloomberg has already spent over $200 million on tv advertising. He also is funding a campaign staff that employs more than 1,000.

Where does he stand in recent polls? All of these surveys were released last week.

How can Adam Schiff and the other Democrat House Managers compete with facts like this (and that)?