A Lot Can Happen In One Month

The entire country is in the middle of a 15-day national "Slow the Spread" campaign in which Americans are being asked to take extraordinary social distancing measures to slow the spread of Covid-19 across the country. 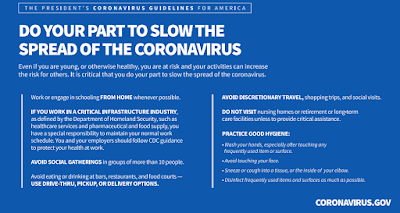 These national recommendations by the President have been supplemented by various measures by the nation's Governors. All the information below can be found at kff.org.

Schools are effectively closed across the nation. 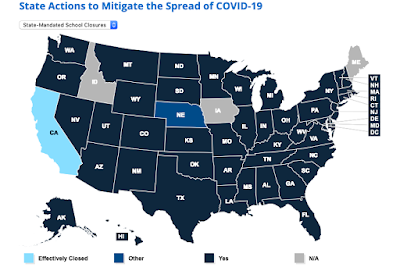 In 43 states, bars and restaurants are closed except for take-out and delivery service. 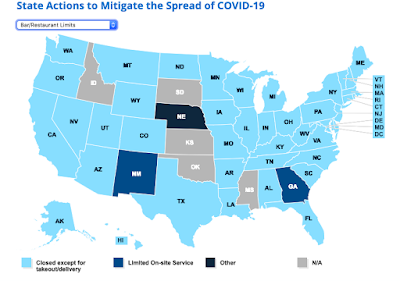 Large gatherings are limited in 40 states. 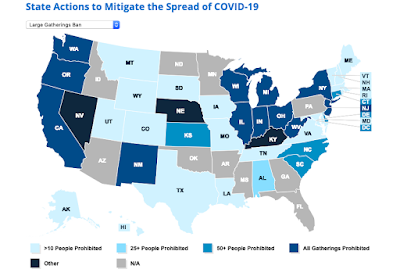 Non-essential business have been ordered closed in 22 states. 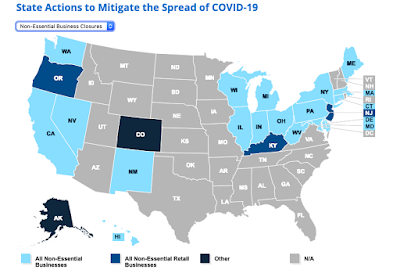 13 states are on state-wide mandatory quarantines. Another 8 have this measure in effect for certain counties or for high-risk groups. These states account for almost 50% of the population of the United States. 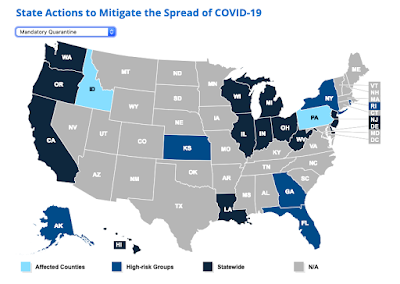 Covid-19 cases continue to grow across the United States. 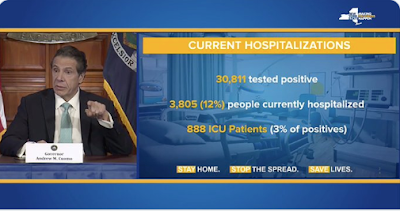 Let's look where these cases are in New York state. 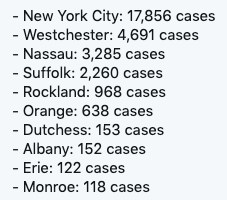 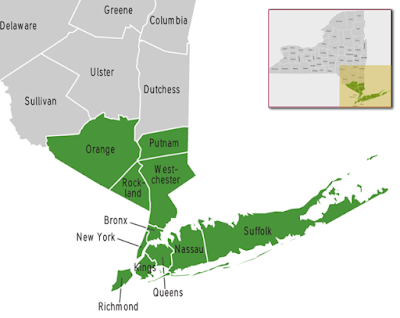 98.7% of all the cases in New York state are in 7 counties in and around New York City.

Consider that New York now has 15 times the number of cases in either California or Washington.

The counties in other states bordering New York City are in the Covid-19 epicenter. 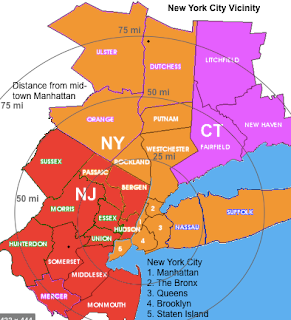 New Jersey is now the state that has the second highest number of cases---4,402 as of today. Two-thirds of cases in New Jersey are coming from those counties considered to be in the New York Metro area.

90% of the cases in Connecticut are in the three counties considered to be in the New York City metro area in the map above.

Looking at the numbers above, what that really means is that the New York City metro area has more cases than the rest of the country combined. In fact, almost 60% of all the cases in the United States are within the confines of that map above.


Why did this happen?

A big reason is the New York authorities were much too slow to take action against the spread of the virus.

Governor Andrew Cuomo is the new darling of the Democrat party based on his daily press conference and his "straight-talk" on the crisis. Some have even suggested that Democrats might turn to Cuomo should Biden stumble or prove incapable to serve as President between now and the election.

In fact, Cuomo is now being given a better chance to be the Democrat nominee for President than Bernie Sanders according to the PredicitIt betting market.

Cuomo is doing a good job right now in responding to the crisis. However, what we are seeing in the New York City metro area is a direct result of earlier inaction by Governor Cuomo and New York City Mayor DeBlasio who did not take the threat serious enough earlier.

For example, here is a tweet by DeBlasio on March 2 where he tells New Yorkers to get on with their lives and get out on the town.

Here is DeBlasio's Health Commissioner urging people to participate in the Chinese New Year parade and celebration at the same time the virus was raging in China and 10 days after President Trump had banned travel from China. She tells people to not change any plans due to "misinformation" spreading about coronavirus.

Something was clearly spreading and it was not misinformation. 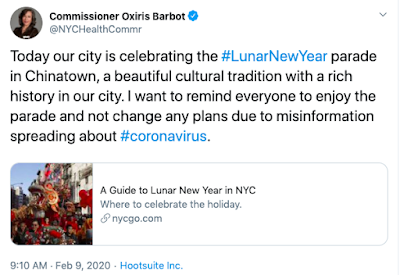 I wrote previously about the actions Governor Mike Dewine took in Ohio beginning on March 9. Dewine declared a state of emergency on the same day when Ohio announced its first three cases of coronavirus. He urged all state universities go to online classes. He declared that all large gatherings were banned.

On March 12 Dewine announced that all schools statewide should close. He instructed all college students to return home.

By March 15 all bars and restaurants were ordered closed except for take-out and delivery orders.

On March 22 Dewine issued a state-wide stay at home order for all but employees and businesses involved in essential services.

During that 7-10 day period a number of other states followed the lead of Dewine in Ohio.

One that did not was Andrew Cuomo. Bill DeBlasio also was slow to act.

In fact, it was not until March 17 that Mayor DeBlasio first mentioned the possibility that New York City might have to consider a "shelter in place" order.

Even worse, Cuomo rejected the idea as out of hand. This is from a headline from NY magazine on March 18.

On Tuesday, Mayor Bill de Blasio announced he was considering a shelter-in-place order for New York City, and that he would make the determination in the next 48 hours. The order, if implemented, would restrict New Yorkers from leaving their homes “except for essential needs,” like shopping for food and visiting health-care providers.

Apparently, New York governor Andrew Cuomo didn’t take the possibility seriously at all. “Any blanket quarantine or shelter in place policy would require State action and as the Governor has said, there is no consideration of that for any locality at this time,” a statement from Cuomo’s office read.

It is clear now that New York City should have been taking the actions they finally undertook at least a month ago.

That is especially true considering that the New York City metro area is such an international travel hub.

In Cuomo's press conference today he asked the rhetorical question as to why New York has 15 times the number of cases as any other state. He said it was his personal opinion it was due to,

1) the density of the population and the close proximity that people had with others.
2) the fact that New York was an international travel hub.

I agree with those conclusions. However, those were well known before this epidemic started. It would seem that Cuomo and his public health officials should have been extra vigilant and proactive knowing these obvious facts. New York was more vulnerable to a virus that comes from abroad than any other area due to these factors.

Where was Cuomo when Trump announced the China travel ban? I could not find any mention where Cuomo or DeBlasio supported the President at the time when so many other Democrats and members of the media were criticizing Trump. That bipartisan support would have meant a lot. You can bet that political correctness had a lot to do with it.

Why have they also been strong supporters of sanctuary city status for New York knowing the obvious vulnerabilities that New York City has and that Cuomo openly acknowledged today?

What were Cuomo and DeBlasio focused on in February?

They were both fighting with Trump because the federal government was no longer going to allow New York residents to enroll in the Global Entry program that expedites people through U.S. Customs because the state had started giving driver's licenses to illegal aliens.


We can see now that the China travel ban probably has had a lot to do with the lower number of cases on the West Coast. It cut off the seeding of more cases early into Washington and California that sees more air travel from Asia. However, flights from China still continued to Europe and Iran. The virus found another way to get into the country and New York City was the best target.

As I have written before, the criticism Trump took over China is probably a big reason that he did not move quicker on stopping European flights. I was of the view that Trump should have stopped those flights several weeks earlier. That was his biggest mistake in all of this in my opinion.

Where were Andrew Cuomo and Bill DeBlasio in calling for stopping the flights from Europe during February knowing New York was exposed as that international travel hub? They should have been calling for Trump to ban the flights at that time. Why did they not lobby for that action to be taken?

Everything in New York is now a reactive response and it is all playing catch-up.

Where do things go from here?

I believe that there is almost no choice other than to lock down the New York City metro from the rest of the country. Flights need to be stopped in and out. Trains, buses and other public transportation that brings people in or out of the metro area need to also cease. A ban on all personal and non-essential travel in and out of the area may also be necessary if the numbers don't start dropping.

At this point it will do no good for Ohio or Nevada or Florida to go through extreme measures for several weeks to stop the spread only to have people from the most affected area in the country bring new cases of the virus in.

The problem is that many people in the New York area have already left the metro area to avoid the shutdown. Drs. Fauci and Birx have told anyone who has been in the New York City area and gone somewhere else the last couple of weeks to self-quarantine where they are so as not to seed more cases elsewhere. Whether people do that will have a lot to do with whether more extreme measures will have to be taken.

Governor Cuomo is warning other parts of the country that their turn is coming. In another month it could be them. He is correct. That can happen. However, a lot of that will depend on how well New York curbs the epidemic locally and how well we contain people from that area infecting the rest of the country.

Unfortunately, Cuomo should have been thinking more about all of this a month ago.

I remain optimistic that we are going to get through this and it will be quicker than most people would predict right now.

I think states like Ohio might be weeks away from getting most of their lives back. We may not see MLB baseball for awhile. At-risk individuals may need to isolate themselves. There may not be a Memorial Day parade this year. We should see results soon from the actions that have been taken.

However, it will be months before New Yorkers will. How long? I don't know.

Let me put it this way for you golf fans.

I think there is a fair chance that the Memorial Tournament will be played in Dublin, Ohio beginning June 4.

I think the chances are almost zero that the U.S. Open will be played in Mamaroneck, New York beginning June 18.

A lot can happen in one month.

We all should understand that now.

It would have been nice if Andrew Cuomo and Bill DeBlasio would have understood that one month ago.
Posted by BeeLine at 9:53 PM