If one thing is true right now it is that humanity has never wagered and spent more based on the output of a model.

We hear it every day from our policy makers.

In my last blog post I referenced the model that the Imperial College of London  had done which projected that the United States was facing 2.2 million deaths and the U.K. 500,000 deaths from Covid-19. The model estimated that even in a best-case scenario "there would still be in the order of 250,000 deaths in GB, and 1.1–1.2 million in the US.”

It was barely a week later that Neil Ferguson, who led the Imperial College study, admitted that his  model may have overestimated the number of potential deaths and the strain on the health care system from Covid-19. He revised the projected deaths down by 90%

Keep in mind that there was a 90% variation in the model's projection of deaths in the period of one week.

The website CovidActNow.org is doing its own model with the objective of pushing policymakers in various states to take stronger mitigation measures to combat the virus.

It has developed a graph for each state with the objective of urging state officials to ACT NOW.

I live in Ohio but it is not clear to me what more that they want Ohio officials to do right now.

The schools are closed. Bars and restaurants are closed except for takeout and delivery. No public gatherings of more than 10 people are allowed. All non-essential businesses are closed. There doesn't appear to be too much more that can be done other than bolt everybody in their homes as was done in Wuhan, China.

In fact, that is the lockdown scenario that CovidActNow is using in its modeling as the preferred method to best deal with the virus. CovidActNow recommends that it last for 3 months. To put that in context, China is scaling back its lockdown in Wuhan now after two months.

The model may say that. However, would there be a state of Ohio in existence at the end of a 3-month Wuhan-type lockdown?

This is the model for Ohio that is displayed on the CovidActNow website.

Over 100,000 projected hospitalizations compared to hospital capacity of 23,000 beds at the peak in mid-May according to the model. This is with Shelter in Place (worst case) in effect.

There are 403 hospitalizations right now in Ohio. 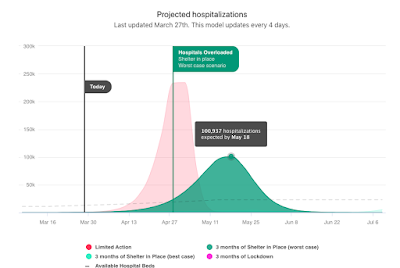 These are the projected outcomes according to the model. Note the range of deaths projected in the model for Shelter in Place which is the status we are in Ohio right now. They are also suggesting that all mitigation efforts must last three months.

Based on my experience in the past week in Ohio I think there is a pretty high compliance level regarding the shelter in place order.

The model CovidActNow is using must be very close to the model that Ohio government officials are following.

Ohio's most recent guidance is that they don't expect to see a peak in the number of cases until the middle of May. At that time they are suggesting that the state we will be seeing 10,000 new cases each day.  That timeline appears to match the CovidActNow model peak.

I must admit when I first heard that number it was hard to process it. I am not an expert epidemiologist or public health expert. I know that exponential infection rates are hard for the mind to process. However, I am a numbers guy and I have to tell you that at first glance that model does not pass the smell test to me.

I could be 100% wrong. This might prove to be the dumbest and most misinformed blog post I have ever written. However, let me give you are a few reasons that I question that conclusion.

Ohio currently has reported that it has run about 20,000 tests to date with about 5.6% of those being positive. In order to get to 10,000 new cases, based on the same positive test percentage, it would require nearly 180,000 tests to be performed per day. Perhaps the testing will get ramped up that much in six weeks. However, that is highly unlikely considering there were just 107,000 tests conducted across the entire country on Friday.

Moreover, as more tests are done it is likely that the percentage of positive results will decrease. Testing is now limited to people with symptoms. If you are at the point that 200,000 Ohioans a day are being tested the positive percentage should get smaller.

Let's put this in context. Doing 200,000 tests per day for one week in Ohio means that 12% of every person in Ohio (population of 11.4 million) would have been tested in that seven day period. I can't see that happening in the next month or so.

The other reasons I don't trust the model is that it does not seem to be consistent with the reality I am seeing around me in people's behavior. The model does also not track with the numbers that the Ohio Department of Public Health is publishing right now and the current infection spread that I calculate from the current trend.

Ohio's cases were growing at a rate of about 2.25x every three days right before the Governor first declared a state of emergency. It declined to about 1.9x right after the ban on large gatherings. It dropped to around 1.5x shortly after the schools, bars and restaurants were closed. Recently it is trending at about 1.25x after the shelter in place order took effect.

These are the state's reported numbers. They are revising some of the past numbers daily. However, this is the current reality. That is not a model. This is the trend in the growth of confirmed cases in the states.

Are we to expect that the case infection rate is going to increase even though all of these mitigation efforts are in place? 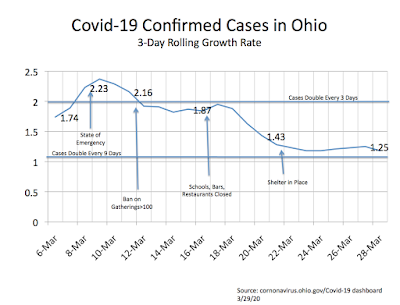 I guess the rate of cases could increase as more testing reveals more positive cases. However, any uptick in cases would seem to have to be short-lived as shelter in place lasts longer.

One fact that is now better understood seems to be that the incubation period of the virus is much shorter than first reported. More than half of people become symptomatic within 5 days. Almost 80% show symptoms within one week. There are some cases where the incubation period in up to 14 days or more but that now appears to be rare. 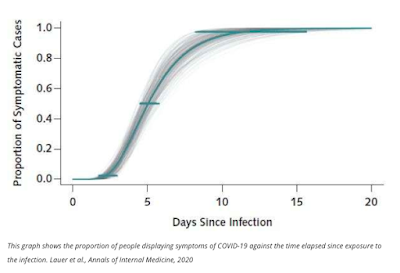 The WHO confirms this and is now saying that Covid-19 actually does not spread as quickly as the flu. Contrary to what we were told earlier, the WHO is also now stating that people infecting others before symptom onset "does not appear to be a major driver of transmission".

I took this screen capture right off the WHO website. 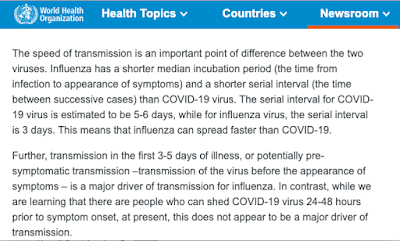 This would suggest that with isolating the sick, along the strong social distancing policies, we should see a demonstrable decrease in cases within 2-3 weeks. This clearly was the rationale that was behind the President's "15 Days to Stop the Spread" recommendations nationally. Of course, states like Ohio, New York and California took that a step further and put shelter in place policies in place that should show even stronger benefits in slowing the spread.

This graph should give some indication that people are following the guidance.

I would imagine if you could graph people's interactions it would look a lot like that graph above.
Where does the infection spread if the number of human interactions and exposures has been curtailed so severely?


The early data that Ohio is reporting seems to back that up. What I don't understand is how these models assume that the spread of the virus is going to worsen despite these measures.

We are even seeing some slight improvement in the case numbers in New York on this measure.

The day before bars and restaurants were closed in New York City the 3-day growth rate was over 4x. The last couple days that number has declined to the 1.7x range. 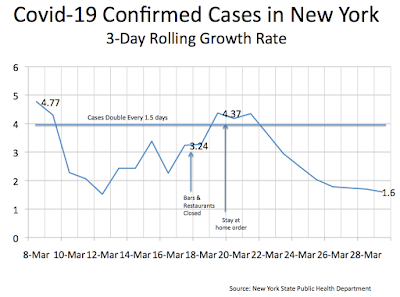 The other reality is this one.

3.3 million new claims for unemployment filed for in the last week alone.

This graph puts those claims in perspective. The Great Depression never saw anything close to this in one week's time. 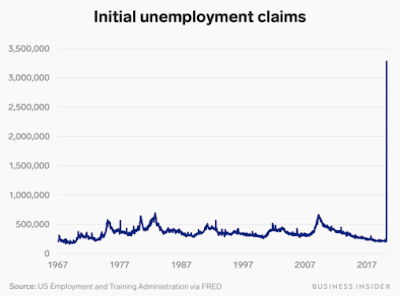 I guess you could say that another reality is that the only thing spreading faster than Covid-19 in the models is the unemployment rate.

Here are the unemployment claims filed in Ohio for the week. 188,000 in claims.


What does that tell me?

New York and California are much bigger states and the stricter containment measures in these states followed Ohio by a few days. We have not come close to the unemployment numbers we are going to see from these and other states in the coming days.

It would not surprise me to see the unemployment claims released this week be another 3 million (or more).

All of this based on a model?

That is our reality.

Will we ever know whether the biggest wager that humanity has ever placed on a model was worth the cost?

Another reality is that long after this is over we will likely still not know the real truth of whether what we have been through was worth the sacrifice and costs.

The modelers will tell us that their models saved us from the drastic effects that the virus would have had on human life.

Skeptics will argue that the virus was never as bad as advertised to begin with.

In the meantime, every American (and most of the rest of the world) is in a new reality that few were prepared for.

The models don't mean much to them. However, the actions that policymakers are making based on those models mean everything.

This 1994 film title says it all for almost everyone right now. The 2020 version is certainly no love story. 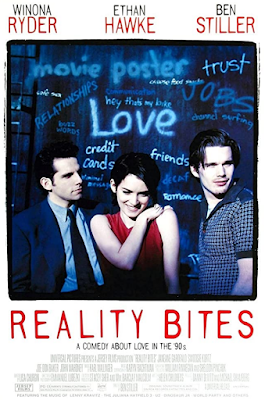 May we have wise and discerning leaders who understand both models and reality.