Trying Times In The Fourth Turning

We are living in the most consequential time that most of us have ever lived in.

These are trying times and they are likely to get much more trying before they get better.

President Trump has been faced with decisions that I don't think any President has ever had to face.

Yes, other Presidents have had to make the decisions about the inevitable deaths of war. Those decisions also involved some personal sacrifices on the homefront as was the case in World War II. However, those sacrifices were generally balanced with an economy that did better due to the war effort. That is the crazy side effect of normal warfare. Factories are humming. People have jobs. Money is flowing in the economy

There are no good choices in the war we now have against what President Trump calls the "invisible enemy." A certain number of deaths are inevitable. Everyone is making personal sacrifices. The economy is taking an enormous hit. It is not even a zero sum game. It is a sub-zero game in all respects.

The mainstream media likes to portray Donald Trump as a dangerous, fast and loose decision maker. They would have you believe that he makes decisions in the same manner that he presides over a political rally with a lot of ad libs and very little preparation.

I have observed Donald Trump for a long time. I have read almost every book he has written and most of the books written about him in order to better understand him.

As I have analyzed Trump's decisions (both in business and as President) I see someone who calculates everything he does. He also invariably makes decisions that are anything but reckless or ill-considered. Yes, he may say outrageous things at times but when the final decisions or deals are made they are backed by good reasoning. The Left may not like the reason, for example the appointments of Gorsuch and Kavanaugh to the Supreme Court, but those were both pragmatic and practical choices.

Trump is generally well informed and has studied the issues in front of him in some detail. He has a good grasp of the facts. You see evidence of that in the daily press conferences where he stands up for an hour or more and answers a range of questions. He may have made money in the casino business but Trump does not make ill-advised bets or decisions.

It should therefore come as no surprise that he listened to the facts that his team of public health experts provided him and made the decision to continue the current social distancing recommendations for another 30 days.

Do I think that Trump questioned the model they were basing their recommendations to him on?

I have no doubt about that. As I have written before, humanity has never wagered and spent more based on the output of a model. Trump knows that better than anyone. All that Trump is facing is clearly counter to his natural optimism. The decision also probably differed from his gut instincts of what is the right path forward.

However, Trump also knew that he would have no defense if he overruled the experts.

If he turned out to be wrong, he would certainly lose re-election. He would never be able to recover from it.

If he turned out to be right, and the experts were wrong, it goes without saying he would not get any credit from the media and a good portion of the electorate anyway. They would not give Trump credit for any decision he made that turned out right.

Therefore, Trump decided to follow the experts and embrace their dire forecasts. We were looking at 2 million deaths if we did nothing. We have to be perfect in our response to keep the death toll under 200,000 in the United States according to Dr. Birx.

In so doing Trump is following another principle that underlies the much different mentality that is present in The Fourth Turning crisis period I believe we are in. 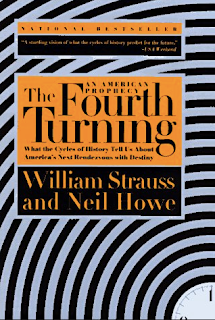 In The Fourth Turning leaders assert public authority and demand private sacrifice. The very survival of society feels like it is at stake.

This is a quote from the book that I could not help thinking about as I heard the President extend his social distancing recommendations and more and more governors issue stay at home orders.

"Where leaders had once been inclined to alleviate societal pressures, they will now aggravate them to command the nation's attention."


What are we hearing every day now?

This is "life and death".

We need three times as many ICU beds as we have.

The Governor of Virginia announced yesterday that he was ordering a stay-at-home order in Virginia until June 10. Just one more example of all of this.

Everything is being done to aggravate the situation to command the public's attention.

This is also what is typically seen in The Fourth Turning. Another quote from the book that I cannot get out of my head while I watch all of this unfold.

"Public issues will be newly simple, fitting the contours of crisp yes-no choices."


What are we hearing from our policy makers? There is no other choice. We need to close everything. It is the only way out of this.

Trump is no exception. He is following the script like everyone else. He really has no choice as I pointed out above. He is now saying the same thing to the American people.

I believe it will serve him well in the end.

We will survive the public health crisis.

My guess is that the numbers will be better than the models project.

Trump will be able to point to that success in the end.

Significant economic damage will be done and we will not recover from it soon. There will still be many unemployed by election day.

Democrats are going to want to lay that at the feet of Trump. Will they really being able to sell that?

I don't see how that works. I think that is especially true when you consider what the rest of the world is going to be dealing with at the same time. Make no mistake, if this is as bad as the modelers say it is the after-effects will be far and wide all over the world.

For example, I was struck with what Dr. Birx said at the press conference tonight. The United States had 5 times as many ventilators per capita in its hospitals as the UK did when this started. The U.S, had a national stockpile to supplement that number as well as manufacturers like Ford, GE and GM who have geared up to make ventilators. Where is the UK by November? Or the EU?

It would be easy to argue that Abraham Lincoln should have not won re-election in the midst of the Civil War. The same can be said of FDR in 1936 or 1940. Those were other Fourth Turning periods where the voters did not change course in the middle of trying times. People were already dealing with a lot of risk in their lives. Do they want to risk more with an unproven leader?

Considering where we are, and where we might be in 8 months, do you think that people are going to have more trust in 78-year old Joe Biden or 79-year old Bernie Sanders to lead us in these trying times than with Donald Trump?

I just don't see it and I don't believe it even though we see polls that are telling us that today.

The Democrats very likely will come to the same conclusion and try to bypass both Biden and Bernie in some type of political maneuver. They might solve the age and energy issues they have with those two with another candidate but will people be willing to risk their lives and livelihoods on hope and change? Will they trust someone in trying times that is unproven?

In May, 2016 I wrote a blog in which I raised the question of whether The Fourth Turning had brought us Trump? It was pretty far out there when I wrote it. At that time Trump had not even secured the GOP nomination. There were many in the Republican establishment who said they would never support Trump. He was way behind Hillary Clinton in the polls.

I closed that blog post this way. How little did I realize how prescient those words were. (By the way, that post stills ranks #3 in views of everything that I have written in over nine years of BeeLine)


"If The Fourth Turning has brought us Trump, can he lead us out of the Crisis? We can only hope. There are no promises. History is not made by events but by the reaction of human beings to events. We are hurtling down the road for a rendezvous with history of our own making. The choices that have been made and those that remain to be made will have deep consequences. We can only trust that the American people will make the right choice."

"In recent years, many Americans have despaired that their nation no longer produces leaders who can galvanize and inspire. Yet it is the turning, not the nation, that elevates great people to the apex of power. Lincoln and FDR are both cases in point. Both had to wait for the Crisis to hit. An Unraveling (the Third Turning) is an era when most people of intelligence, vision and integrity do not seek (much less get elected to) high public offices.

"I know it is hard to imagine associating Donald Trump and Abraham Lincoln but that might be the bet we are making in 2016. We may need no less than a Lincoln with what lies ahead."

We can only pray that the bet that the American people did wager in 2016 was equal to that made in 1860. The stakes could not be higher.

There could not be much more on the line.

That should be clear to everyone now