If we have learned anything the last several weeks it is how quickly fortune can turn. It literally can turn on a dime---good or bad.

A lot of what happens in the world is driven by social mood. Social mood is as contagious as COVID-19. Human beings are social creatures and our interactions among each other affects our collective mood both positively and negatively.

There is an entire field of study called "socionomics" that has been popularized by stock market economist Robert Prechter.

Traditional thought is that social events drive social mood. For example, a falling stock market turns people's moods from positive to negative. Socionomics theory proposes just the opposite. It is social mood that governs the character of social events.

This is how the Socionomics Institute describes social mood and its effects.


A Gallup survey released February 6, 2020 showed that we were undeniably in a period in which social mood was particularly positive.

In fact, it is one of the more amazing polling numbers I have ever seen.  That survey asked Americans whether they were satisfied or dissatisfied with the way things were going in their personal lives.

An incredible 90% of Americans recently said they were satisfied with their personal life!

90%! Is there anything you can cite in which 90% of people agree on anything these days.

That is the highest number Gallup has ever found in this survey which dates back to 1979.

What is particularly noteworthy is that 65% of those surveyed stated they were very satisfied with their personal life. That is the highest total ever by a large margin and it has spiked up noticeably since 2017. 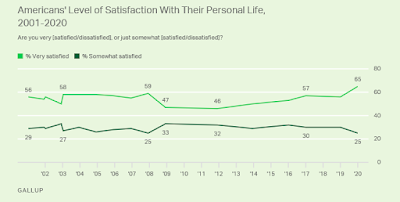 Yes, the economy is better but personal satisfaction is a much broader measure. You may be putting bread on the table but do you like your job? Your boss? Are you satisfied in your marriage? With your friendships? How about your health? It encompasses a lot. 90% are satisfied with their personal life? That is incredible.

It is pretty interesting to also look at the breakdowns on the question of personal satisfaction by subgroup.

As you might expect, those making $100,000+ and Republicans are more satisfied right now than Democrats and those making less than $40,000 are.

However, no subgroup scores at less than 80% satisfied.

There is also no subgroup that isn't at least 54% very satisfied with their personal life. 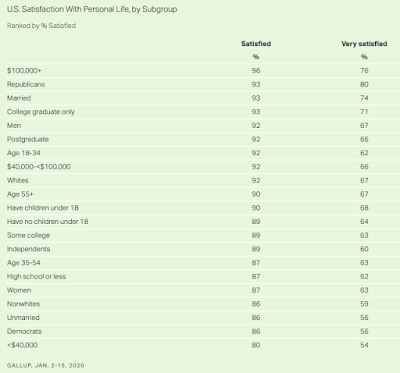 Will people be as satisfied with their lives in November as they are now?

Donald Trump has to be hoping that is the case.

However, a lot can happen in eight days let alone eight months. Look no further than Joe Biden or the stock market

The reality is that the latter will have much more profound impacts on our society than the former.

Will people be as positive and satisfied about their lives six months from now even if COVID-19 is a distant memory?

A lot may depend on whether the positive social mood reflected in this Gallup survey remains intact.