Looking Back In Time

At times like these, when the speed of events is moving so quickly, it is difficult to look back in time to put everything in context.

Let's take a look back and see what I am talking about. In many respects, if we look back only three months ago, it seems like an eternity.

The U.S. House of Representatives impeached President Trump on December 18, 2019. Little did anyone know that a virulent virus was already circulating around Wuhan, China at the same time.

That gambit failed but it resulted in start of the Senate trial being delayed. The articles were finally delivered on January 15. The trial in the Senate began a week later on  January 22. This was probably a delay of two weeks beyond when it normally would have started if Pelosi would have delivered the articles of impeachment immediately after the House voted in December.

Alex Azar, the Secretary of Health and Human Services, has stated that the CDC first became aware of the Chinese virus on January 3. Offers of assistance and medical support were offered to the Chinese by the United States but were rebuffed.

On January 14 the World Health Organization (WHO) was quoting Chinese authorities that there was "no clear evidence of human-to-human transmission" of coronavirus. 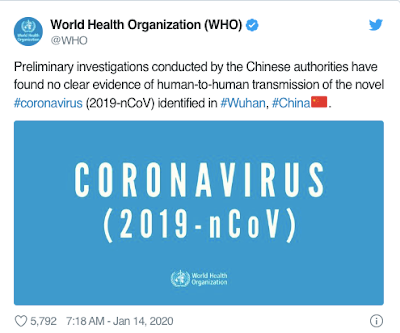 Those Chinese authorities clearly were misleading (lying to?) the WHO and the rest of the world.

On January 22 the first case of the Chinese virus was confirmed in the United States. Ironically, that was the same day that the Senate trial began on the impeachment of Donald Trump.

It was only nine days later on January 31 (in the middle of his impeachment trial) that President Trump announced his restrictions on travel from China into the United States.

Remember that Trump did this in the middle of the Senate impeachment trial when he had to know he was going to be roundly criticized by Democrats and those in the mainstream media. He did it any way to predictable results. (Hat tip to @lyndseyfifield for the research for the four following examples of how the press castigated Donald Trump at the time he announced the China travel ban).


The media quoted so-called public health experts who said that this was exactly the incorrect response.

This then created a narrative from the media that Trump was not following the "science" but following the lead of conservative lawmakers and "far-right" supporters.

The Washington Post basically took the Communist Chinese talking points in slamming the President and pointed out that Trump was disregarding the WHO's recommendations against travel restrictions. Yes, the same WHO who stated two weeks earlier that there was no clear evidence that coronavirus could be transmitted through human to human transmission.

The WHO said that restricting travel or trade would not help. Where are they on that opinion now?

What did Joe Biden have to say about Trump's actions at the time?

“This is no time for Donald Trump’s record of hysteria and xenophobia,” Biden said during an Iowa campaign event right after Trump announced the China travel restrictions. Biden also said at the time that Trump was "fear mongering".


What about Chuck Schumer? 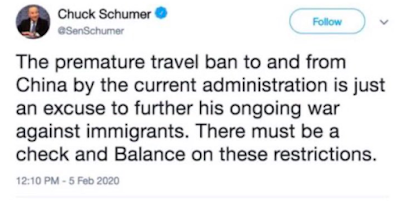 Let me remind you again that President Trump took this action and had to take all of this criticism during the middle of the impeachment trial.

Donald Trump was not formally acquitted on the two articles of impeachment until February 5.

It is pretty remarkable when you think about it.

How many others would have had the courage to do what Trump did knowing he was going to be called a racist, a xenophobe and fear monger in the course of his impeachment trial?

We now know that Trump's decision was one the most important and consequential decisions that was ever made by a President under the circumstances. It would have been easy to hunker down and do nothing in light of the impeachment trial. I am sure he was told by many advisors to do just that.

If you doubt the importance of that decision look at the current statistics of Europe compared to the United States. Europe did not restrict flights from China as Trump did. Italy did do it the day after Trump but the rest of Europe stayed open. People in Europe could also travel freely within the EU.

The United States has seen confirmed cases increase dramatically the last few days as testing ramps up. However, the differences between Europe and the United States regarding coronavirus case loads and deaths are dramatic.

A lot of the difference has to be traced back to the China travel ban.

(All data from WorldOMeters.com as of 3/20/20, 22;10 GMT)
EU countries considered in numbers below--Italy, Spain, Germany, France, Switzerland, Netherlands, Austria, Belgium, Norway, Sweden, Denmark) The population of these countries is approximately the same as that of the United States.

I have stated before that I think that Trump waited too long in banning travel from Europe.


Say what you want about President Trump but he is not a conformist in the way most politicians are. He is not afraid to separate himself from the herd. He has done it a number of times on a number of issues.

However, he is not immune from the pull of conformity and the target you become when you don't follow the herd. For example, for several weeks I have believed that flights from Europe (especially Italy) should have been banned. We are now learning from the CDC that 70% of all new cases in the United States have been traced back to Europe.

It is not easy separating yourself from the herd. It goes against most human instincts. It always feels safer and secure to conform. After all, there has always been much greater risk to stray from the herd or crowd.

Why didn't President Trump shut off flights from Europe earlier? Do you think the earlier heat he took on China might have had something to do with that? We shut the door on China but left the backdoor open with Europe. We are paying the price for that now.


Of course, the criticism of President Trump now is that he did not act strongly enough and early enough. Or he is peddling false hope and optimism. We are starting to hear that he is listening too much to the scientists and not enough to the economists.

Of course, we don't know how much the entire impeachment fiasco might have resulted in some level of distraction and disruption within the White House that might have allowed for better preparations.

Anyone can be a Monday morning quarterback. Even me.

However, I think the record above shows that Donald Trump has navigated this about as well as any human being could with imperfect facts and data.

We should all pray that he will continue to be blessed with the discernment and decision making necessary to continue to protect the people of the United States of America.
Posted by BeeLine at 6:54 PM