We often hear that we need to "follow the science." This is particularly popular with Liberals as they attempt to push their climate change and Green New Deal agenda. They like to tell us that we can't ignore "the consensus of scientists".

However, what if the consensus of scientists is wrong?

One of the most popular blog posts I have ever written was "Consensus Is Not Science". In that post I wrote about the the so-called "consensus" of scientists that climate change was settled science.

When it comes to settled science, there is no doubt that we have climate change. It changes every hour, every day and every year. It has changed over the centuries.

The question is not whether it is changing but whether man is impacting that change and, even if that is the case, whether we can even do anything about it?

Whenever we hear about the "science" of human related climate change there is nothing "settled" about it. That is why we hear that this view is supported by the "consensus" of scientists.

Of course, "consensus" is not the same as facts. And consensus is not a scientific fact. A scientific fact is the law of gravity, the boiling point of water or the distance to the moon.

Prior to the 15th century, the consensus of scientists was that the earth was the center of the universe.

In the 18th century, the consensus of medical scientists was that blood letting was the best method to cure illness.

As recently as 25 years ago the consensus was that peptic ulcers were caused by stress. We now know it is caused by bacteria.

I could go on and on. In fact, in most cases like these, the consensus of scientists was proven wrong by one person who did not believe the consensus and proved it wrong.

Why do I bring this up now?

We are starting to hear the same "follow the science" mantra from those on the left who are questioning President Trump in his statement that we may soon be loosening some of the nation-wide restrictions imposed to counter the Covid-19 epidemic.

This Joe Biden tweet from today is proof of that.

Never mind that President Trump is merely doing what we should expect our national leader to do. Balancing the public health and economic costs in this crisis in his decision making.

Why does that make sense?

One big reason is that the "consensus of scientists" has changed a great deal in several months regarding Covid-19.

For example. the World Health Organization (WHO) is the recognized global authority on public health issues.

Let's take a look at how the WHO scientists have evolved in their view of "the science" over time.

As late as January 12 the WHO was stating that there was "no clear evidence of human to human transmission" regarding the virus.

On February 3, in response to the travel ban that President Trump initiated with China on January 31, the WHO stated "there is no need to restrict travel in order to slow the spread."

That was supposedly the best "science" at the time. 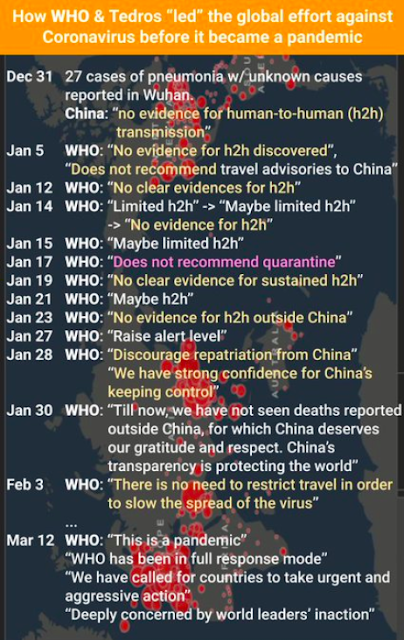 Of course, by the middle of March the WHO was stating that "this is a pandemic" and it was "deeply concerned by world leaders' inaction."

We can also look at the study published on March 16 by Imperial College in London that predicted that millions were going to die in the United States and the UK from the virus even in a best case scenario with extensive mitigation efforts in place like we are seeing now.

A study published Monday by the Imperial College, a public research university in London, estimates that millions will die from the coronavirus pandemic in the United Kingdom and United States. In their best-case scenario, in which transmission of the virus is massively mitigated, and “even if all patients were able to be treated,” the authors write, “we predict there would still be in the order of 250,000 deaths in GB, and 1.1–1.2 million in the US.”


That "science" was massively influential in changing the UK response to Covid-19. It also clearly pushed New York and other states in the United States, who had been resisting stronger measures, to move to "stay at home" or "shelter in place" orders.

That was the "science."

However, today we find the "science" has changed.

Neil Ferguson, who led the Imperial College study, testified before Parliament yesterday that his  model may have overestimated the number of potential deaths and the strain on the health care system from Covid-19.

The UK should now be able to cope with the spread of the Covid-19 virus, according to one of the epidemiologists advising the government.

Neil Ferguson at Imperial College London gave evidence today to the UK’s parliamentary select committee on science and technology as part of an inquiry into the nation’s response to the coronavirus outbreak.

He said that expected increases in National Health Service capacity and ongoing restrictions to people’s movements make him “reasonably confident” the health service can cope when the predicted peak of the epidemic arrives in two or three weeks. UK deaths from the disease are now unlikely to exceed 20,000, he said, and could be much lower.


Keep in mind that one week ago Ferguson was stating that the "science" indicated that 250,000 would die in the UK and the health system would be overwhelmed. That was the "best case scenario". That was not the worst case.

Yesterday Ferguson stated that the "science" is now that hospitals have the capacity to deal with the problem and deaths were unlikely to exceed 20,000 and could be much lower.

In one week "the science" is showing a variation of 90%?

Is this the "science" that Joe Biden wants us to follow?

You also have to ask if scientists can be this far off in models over a one week period how is it that we are supposed to believe hypothetical climate models that are trying to forecast events years and years in the future. They also want us to spend tens of trillions of dollars to avoid a fate that is complete conjecture.

I am much more confident in following our leader right now.

I have not seen anything to indicate that President Trump is not considering and balancing the science, the economy and what is best for the American people in the short and long term in all the decisions he is making.

If you want another perspective on the "science" you might want to view this 10-minute video of a German pulmonologist ,Dr. Wolfgang Wodarg, who has a lot of experience with respiratory viruses in his career.

His view of the Covid-19 crisis is that it is an example of the scientists and virologists getting the attention of the government and politicians such that the hype has vastly exceeded the virological frame that should have surrounded it. He says this would have never been considered anything extraordinary if it had not crossed into the political and media realm.  He is not seeing anything much different than he did in any flu season in his career.

Wodarg makes the point that each year coronaviruses generally have made up 7-15% of respiratory viruses. Interestingly, the testing that has been done so far nationally (over 400,000 cases) is running right around that percentage range in testing of those with symptoms in the United States.

The doctor says that the problem now is that it is very difficult for any scientist or virologist to not be in the mainstream. The king may not have any clothes on but no one wants to admit it at this point.

Check it out and make up your own mind where the science is on this.


All of this leads to the question ...which "science" are we supposed to follow?
Posted by BeeLine at 7:02 PM