Looking Over The Cliff

On January 30, just as the reality of what the impacts of the coronavirus on China were becoming known, I commented that the economic impacts of the virus could very well be more contagious than the virus itself.

This was based on observing the extraordinary measures the Chinese government took in shutting down human and economic activity to combat the virus.

As we saw the virus escape China and start spreading around the world, we saw the economic impact playing out more and more, even before government entities got directly involved.

I wrote this on March 2.

We have already seen international air travel drop dramatically. I would expect that we will soon see the same in domestic air travel. I would expect restaurants, bars, theaters and other venues that host large numbers of people around Seattle, and in places in California where cases have been identified, will see precipitous drops in business. Retail shops will also suffer except for grocery stores which may struggle to keep their shelves full due to panic buying.

We may see this story unfold across this country if the virus cannot be contained. It may get very, very ugly before it gets better. Most people will survive the virus. It is an open question how many will survive the potential economic fallout.


Of course, that is exactly where we are right now.

There is no question that most everyone will survive Covid-19.

The question now is how many will survive the economic impacts that will follow the drastic measures that have been implemented by authorities to combat the measure.

Will we discover in the end that the cure was really much more deadly than the disease?

In my view, this is the week that we really need to look over the cliff at the possibilities.

I have stated previously that I believe the measures that President Trump and his task force team recommended for the 15-day period we are in makes sense.

I think the economy can survive and rebound from that shock. We will have sustained some damage but it is the type of thing we can bounce back from. People and businesses may have had to take off from work or closed for this amount of time previously and been able to withstand the disruption. There is some margin in their lives or business to deal with a couple weeks like this. After all, people take vacation time. Some businesses close for the same reason or to remodel or retool.

However, it seems to me that every day beyond that point the longer term risk to our economy will grow exponentially. I have to think that the human costs from that exponential risk will soon be greater than the human costs of the disease.

A virus like Covid-19 becomes more deadly because of the compounding effects it has on a population. We have seen that all over the world.

However, an economy unravels through compounding effects as well. Customers don't come to a restaurant or store. The owner has to lay off her employees. The owner eventually can't pay their rent. The property owner can't pay the loan on the building. The bank ends up with a bad loan. Everyone then cuts back on their own spending. Tax revenues to the government fall. Government services need to be increased. Large fiscal deficits occur. The cycle continues as the compounding continues.

A point is reached at which you have fallen so far into the abyss it is next to impossible to climb out. 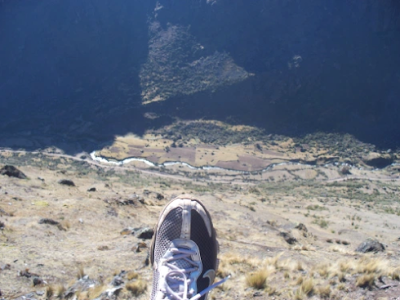 We are looking over the cliff right now.

For example, one analyst recently estimated that having 50% of the economy shut down equates to a annualized loss of GDP of 1% per week. Since our economy has only been expanding in the range of 2%-3% per year, at the end of this two week period we could have already effectively wiped out an entire year of economic growth. 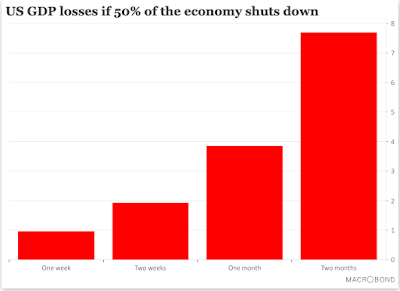 Here is the headline on the most recent forecast by Goldman Sachs of the economic effects we are looking at.

Goldman Sachs sees a long, slow ride back as shown in the graph below. 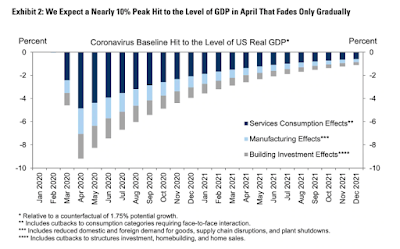 If you can't process what is over the cliff let's look at some data from China that indicates that both numbers above may be optimistic.

This shows an index that generally tracks China's business services economy that I found on Zero Hedge. The graph goes through the end of February. 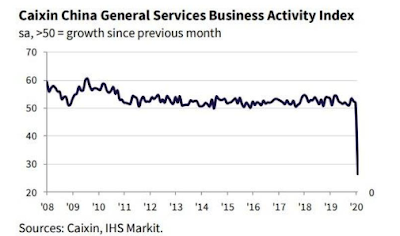 Here is graph showing the broader composite index for economic activity in China. 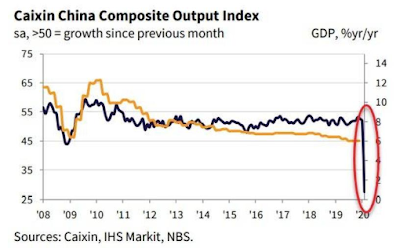 Deutsche Bank forecasts that China's economy will shrink by 31.7% overall in the first quarter.

Let's look at something that is a little easier to grasp for a specific industry we are all familiar with.

China auto sales were down 79% in the month of February.

So much will be affected as time goes from what is happening now and the next few weeks.

This past week my dentist contacted me to say she was shutting down her practice for several weeks. That means no money coming in for her and her staff. I have heard that the ADA has recommended that all dental practices close.

My doctor's office called to say they were postponing all routine visits so as to have capacity for flu cases and Covid-19.

Someone was at Home Depot and they said residential contractors have seen their business evaporate because no one wants anyone in their home.

At the same time, interior paint sales are surging as a lot of people are tackling home projects that they didn't have time for before.

Look at this graph that shows the drop-off in New York City subway usage. 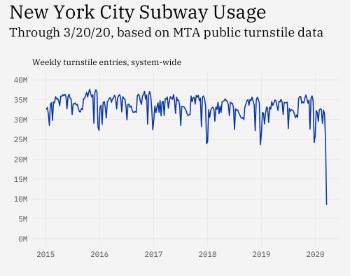 With the virtual shutdown of New York now taking effect, the coming week's numbers will be even worse.

There are cliffs everywhere we look.

Make no mistake, business was going to suffer even without any direct government action due to the public's concern about Covid-19 in the first place. Under the best of circumstances it is going to take time for people to regain their confidence in human interactions and commerce.

However, over the next week or so government is going to have to be looking over the cliff and make a judgment of whether the cure that has been prescribed by our authorities might actually be worse than the disease.

Expect to see more questions about this with every succeeding day.