It seems that the situation involving Covid-19 is about to get even more interesting.

Today we saw the announcement that a single corporate management meeting by Biogen that was held in Boston involving 175 managers from around the world (including Italy) is now known to be responsible for 70 of the 92 people infected by the virus in Massachusetts. Attendees at the meeting have also developed cases in other states.

Shortly thereafter Harvard University announced that it would no longer have face-to face classes and that all instruction would be online after the school returns from Spring Break.

Ohio State University and other schools made similar announcements today. I would expect this practice will be followed by hundreds of colleges soon.

Ohio's Governor recommended that all indoor events be closed to the general public. The Mid American Conference basketball championships this weekend in Cleveland will only be open to athletic officials, family and friends. The Big West Conference is doing the same.

It would not surprise me to see the NCAA basketball tournament that is scheduled to begin next week end up with a similar fate. The first round play-in games are scheduled for Dayton, Ohio beginning on Tuesday.

What about The Masters? Opening Day for major league baseball? NHL hockey and NBA basketball? It will not take much more before these will be tv events only. How far is this going to go?

Is all of this an overreaction? Possibly. However, look at the effects from that one business meeting in Boston. When dealing with the unknown it is far safer to err on the side of caution.

One of the challenges in dealing with what we are confronting right now with the global outbreak is how much is unknown about the virus.

This has resulted in widely divergent views. Some argue that all of it is overblown. They believe it is not much different than the ordinary flu.

There are others who are suggesting that this is the end times.

From my perspective, neither viewpoint is helping the situation.

What we are dealing with seems to be much more serious than the ordinary flu. Look at the extraordinary quarantine efforts that the Chinese initiated. Look no further than what is going on in Italy and Iran right now. Look at the effects from that one Biogen meeting.

At the same time, it increasingly looks as if the virus is really most lethal only to those who are elderly, frail or who have compromised immune systems. In fact, the CDC stated yesterday that Covid-19 appears to actually be less dangerous to children than the ordinary flu.

At a time with so many unknowns, so much emotion, and the additional reality that many are trying to politicize the issue, what are some real facts about what we know about the virus?

Here are a few facts that I have been able to put together based on research from various sources including the CDC, www.Worldometers.info and a great post on Twitter by L. All of this is based on global data.


The U.S. Surgeon General reported that the average age of those who had died from Covid-19 in the United States was 80 as of March 9, 2020. 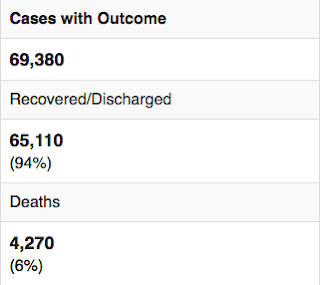 Of those currently infected, 88% have a mild condition and 12% are in serious/critical condition. 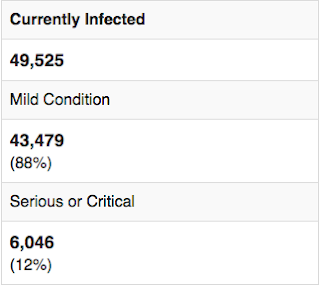 Cases in major countries as of March 11.

One of the encouraging items in this recent data is the reduction in new cases in China as well as Japan which a month ago were the hot spots for the virus in the world. They have been replaced by Italy and Iran.

A total of 270 all over the world died from Covid-19 yesterday.

For perspective, over 1,300 died from the seasonal flu.

200 people die from snakebites around the world in a typical day.

The other big news of the day was the announcement by New York Governor Andrew Cuomo that the state was creating a "containment area" around a community in New Rochelle, New York in an attempt to limit the spread of the virus to an area that quickly has become "ground zero" for Covid-19 cases in the state.

The containment area is centered around a synagogue which accounts for 108 of the state's 173 cases. 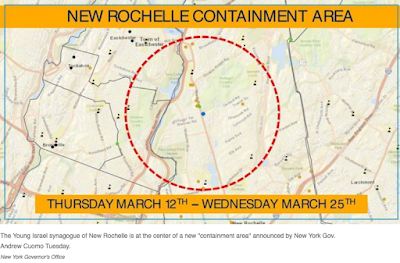 "It is a dramatic action, but it is the largest cluster in the country," Cuomo said. "And this is literally a matter of life and death."

A synagogue in the city has become the epicenter of an outbreak in Westchester County — which accounts for 108 of New York state's 173 coronavirus cases. Hundreds of people in the Young Israel congregation have already been under a voluntary quarantine order that was issued last week. The congregation's rabbi has confirmed that he is among those who have tested positive for the virus.

As of Tuesday, that synagogue is also at the center of a circle that extends for a 1-mile radius, marking the state's containment area. Residents would still be allowed to move around — but the new policy effectively blocks any large public gatherings in the area, to prevent further transmission of the virus.


The National Guard is also being called on to assist in carrying out any functions in the zone but Cuomo states they will not be performing any policing functions,

Seeing all of this is further proof that we are in The Fourth Turning which I have written about a number of times in these pages. Here is the most recent blog post I wrote about the book shortly after Donald Trump was elected President. 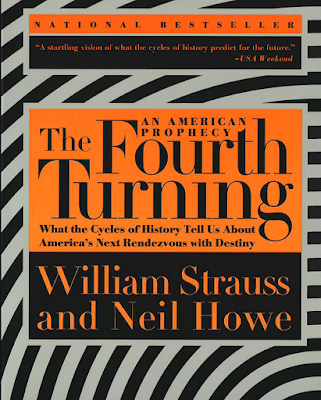 The Fourth Turning is a book written in 1997 by William Strauss and Neil Howe that refers to the cycles of history. There is a pattern to history. There are four turns much as there are four seasons.  A new era -or turn- occurs about every two decades or so.

At the start of each turning, people change how they feel about themselves, the culture, the nation, and the future. Turnings come in cycles of four.  Each full cycle spans the length of a long human life, roughly 80 years.

There is a Spring which is a High where institutions are strengthening and individualism is weakening and a new civic order is implanting. This was the period beginning right after WW II to the late 1960's

There is a Summer which is the Awakening.  This is an era of spiritual upheaval when the new civic order comes under attack from a new values regime. This period began in the late 1960's with the flower children and Vietnam War protests and lasted until the late 1980's.

There is a Fall which is the Unraveling.  This is a period of strengthening individualism and weakening institutions.  The old civic order decays and the new values regime firmly implants.  This began in the late 1980's and the authors predicted that it would run for about 20 years.

The Fourth Turning is the Crisis which is the Winter.  It is a decisive era of secular upheaval according to Strauss and Howe. In 1997 (when they wrote the book), they predicted that "sometime around the year 2005, perhaps a few years before or after, America will enter the Fourth Turning."

Could Covid-19 be the catalyst that takes us to the point of maximum crisis?

When Strauss and Howe wrote The Fourth Turning in 1997 they listed some plausible scenarios that could be catalysts to crisis.

Here is one of several they suggested 23 years ago (you can find it on page 273 of the book).

The big takeaway from The Fourth Turning is that when the nation hits the crisis climax point (as we did previously with the Revolutionary War, Civil War, Depression/World War II---notice that all were separated by approximately 80 years) the people came to realize that the very survival of society is at stake.

At that point the public mood shifts to one that is less concerned with individual rights and more concerned with the collective good. People ultimately will seek this as a means for society to survive the Crisis. It has no other choice.

We have lived through a long period of division, divisiveness, rancor and acrimony in the United States. It is hard to see this era ending in that we have lived with it for so long.

However, as Winter turns to Spring, history also has its turns. Looking at history reminds us that periods of crisis can make us all stronger. It is times like this that makes it clear that we need to focus more on what unites us than divides us.

Perhaps Covid-19 is not the catalyst for the Crisis climax that changes the public mood to one that values unity over division and rational dialogue over rancor. I do know that nothing lasts forever. This virus will not last forever. The divisiveness and acrimony will also soften at some point.

In the meantime, a good portion of the population may soon be exposed to a much different world than they have experienced in their lives before. That is starting to be made clear with the news from today.

I would suggest that it is a good time to remember this no matter what turns are ahead for us...

And we know that all things work together for good to them that love God, to them who are the called according to his purpose.