Covid-19 by the Numbers

One of the interesting things about the Covid-19 pandemic is that it is not only a health care challenge but it is also a numbers game.

I am a numbers guy so I have found myself most interested in examining the numbers surrounding the Covid-19 virus.

Pandemics are caused by a compound number of infections occurring over larger and larger geographic areas. They only end when the compounding number of cases can be stopped.

There are two key numbers in any pandemic situation.

The infection rate. In other words, how many people will typically be infected by one person with the virus? This is also referred to by public health experts as the R0.

The mortality rate. What percentage of those infected will succumb to the disease?

One of the unknowns about Covid-19 is that we don't know either of these numbers with certainty. It is a new virus and there is not enough data right now.

The best estimate is that it is 1.5x-3.5x more contagious than the seasonal flu.

It is also 3x to 12x more deadly than the seasonal flu.

This graph shows where it is believed that Covid-19 falls on those measures compared to other high profile communicable diseases. For example, the seasonal flu only has a fatality rate of .10%. That means 1 in 1,000 who contract the virus will die because of it.  Covid-19 might be 1%---10 times greater. 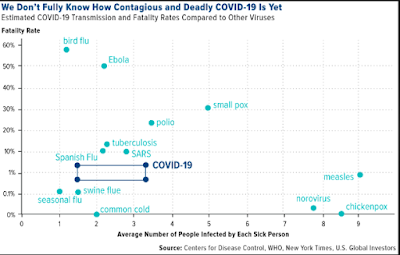 These unknowns are a big reason why public health officials are erring on the side of caution right now. The data thus far does show that the hospitalization and mortality rate are undoubtedly higher than the seasonal flu. How much higher is the big question right now.

What has also made the numbers challenging to analyze with Covid-19 is the lack of broad testing.

The media and others have tried to make a big deal of the failure to get enough test kits and testing sites out in the public to determine the true amount of Covid-19 in the community.

However, the reality is that there is generally very little testing done with the seasonal flu compared to those infected. Those tests kits also could not be used for Covid-19 as it was an entirely new strain.

For example, the CDC is currently estimating that there have been 38 million cases of the seasonal flu this year but only about 270,000 of those have been confirmed by testing. About 1.2 million tests were conducted with around 22.5% showing positive tests for the flu. In other words, less than 1% of all cased of the flu are confirmed by a test. Most people realize they are sick, rest and recover at home and are never tested. Of the most severe cases, there have been 390,000 hospitalizations and 23,000 deaths so far this season.

This year has been a particularly brutal flu season even without accounting for Covid-19. My personal physician recently sent me a letter in which he stated this is the worst influenza season he has seen in 28 years of practice.

This is the CDC graph comparing hospitalizations from the flu compared to other recent years.

This may also further explain the pressure on the hospital system in some parts of the country as we are dealing with Covid-19 in addition to a higher than normal seasonal flu. It also may be the case that doctors like my own have been seeing Covid-19 mixed in with regular flu cases all along. We won't know until more testing is done. That includes an eventual antibody test that will tell us just how many people have been exposed to the virus in the population.

When you put the entire testing situation in context I think it is rather remarkable how quickly the test numbers have been ramped up considering there really weren't millions of test kits sitting on the shelf when it began. After all, how could there be a reliable test if it was a new strain of virus that only surfaced in the last several months?

There also seems to be no doubt that the large increase in confirmed cases right now is being driven more by increased testing than anything else.

Here are the number of Covid-19 tests that have been administered and reported since President Trump was able to create the public-private partnership with commercial labs and not rely on the CDC and state public health agencies for testing. It should be noted that not all labs are reporting all tests into the database right now. However, those that are have found a pretty consistent 10% positive rate for all those tested (note the exception for New York mentioned below.) 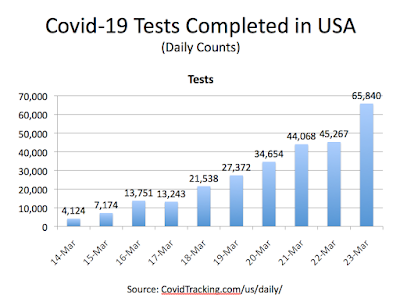 This is what the Surgeon General said about the number of tests, and what they mean, over the weekend on Twitter. 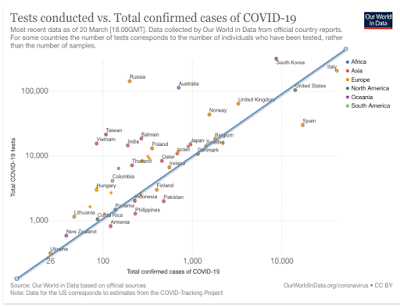 It probably should not be a surprise that the countries that deviate most favorably from that line (Russia, Australia, South Korea) have done the most tests. 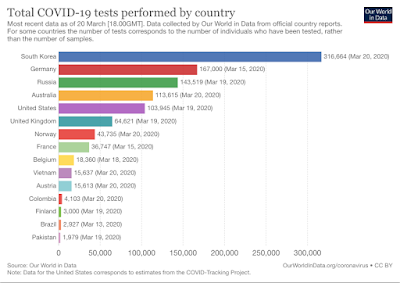 Again, this is several days ago and the United States testing is accelerating quickly. The most recent test numbers for the United States are now over 280,000 according to the source I used above. (VP Pence stated at the press conference tonight that the test results processed is actually at 313,000.)

Test numbers are now increasing by at least 50,000 per day and the Surgeon General believes that 100,000 is possible. At that rate the United States is going to surpass South Korea in total testing within the next week and in two weeks it could be close to South Korea's test totals on a population adjusted basis.

A key metric as testing continues to expand within the population is whether we begin to see the positive tests as a percentage of total tests fall below 10%. This would tell me that we are making progress. However, there is a long way to go in achieving that number in New York which Dr. Deborah Birx stated tonight is currently seeing a 28% positive rate from testing. The rest of the country is testing positive at 8%.

That tells me that we are going to see more stringent measures in the New York area. It is difficult to see how any flights or any but the most essential travel should be going on between New York and other parts of the country right now.

However, even that is not easy. To really understand how dangerous Covid-19 is we need to determine exactly what the excess mortality is. Yes, someone could have died and tested positive for the virus but they could have also died from the seasonal flu or something else. It is the excess mortality that we really need to identify.

I have been trying to analyze this angle but I cannot find any reliable numbers to put this in the proper context.

For example, we now know that no country has had more deaths than Italy from the virus. Over the last several days Italy has been seeing an average of over 600 deaths per day attributed to Covid-19. 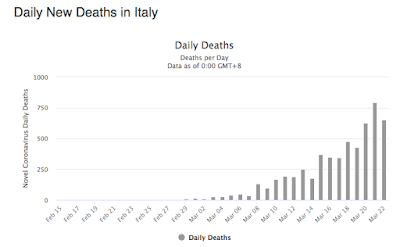 However, what does this mean without knowing what "normal" is?

Italy's population is approximately 60 million people. Last year it had 634,000 deaths. In 2020, before this pandemic began, it was projected to have 640,000 deaths for the year. That is an average of 1,753 per day. However, we know that deaths in all countries tend to increase in the winter season.

For example, here is a graph that shows the seasonality in the number of deaths in the United States for 2017 when deaths averaged 7,708/day for the entire year. However, during the winter months deaths averaged about 8,400---9% more.

If we apply that same percentage to Italy, we would expect around 1,900 deaths under normal circumstances. They are attributing 600 deaths to Covid-19. That is a large percentage of the normal rate of 1,900. However, is that really excess mortality?

If Italy's total deaths right now are running 2,500 per day then this is as serious as it can be. That is a number that is over 30% higher than normal.

However, what if total deaths are 2,000 per day? This would suggest that excess mortality is only about 100 per day. This would only be a 5% increase over the normal daily average.

It seems to me that the excess mortality number is the most important data point in all of this. It is especially important as the President and others have to look more critically this week at the trade-off between our public health and our economic health.

Perhaps total deaths is not a number that we have routinely collected or monitored on a daily basis across the United States. It probably is a number than gets reported from death certificates in the various states on a monthly basis to the CDC.

Even if we have the number on a daily basis it probably lags a couple days compared to deaths because of the lag in getting the death certificate signed and filed.

However, I am a numbers guy. I think President Trump is one as well.

If I was sitting in his chair I would be demanding to see the total death numbers across the United States every day and compare it to the numbers that were projected before all of this started in order to determine the excess mortality number from Covid-19 in real time.

We need better data than what I am seeing. I would also not want to get this number a year from now and find out we destroyed the economy by not having the right data when we needed it.

I don't see any other way to really assess where we are and what our next steps should be as a nation to combat the virus.

The worst thing we could have done in this situation is to not take it seriously.

What is the next worst thing? We took it way too seriously when the data later shows we vastly overreacted.