A Tale of Two Flu Pandemics

Millions infected by the virus.

Our President does not declare a national emergency until months after it is clear that the virus is being spread widely in communities in the United States.

Am I speaking about President Trump?

No. Trump declared a public health emergency involving coronavirus over a month ago on January 31, 2020. This was when only a couple of cases had been found in the United States.

The global pandemic stats I referenced above occurred in 2009 under the administration of Barack Obama involving the H1N1 (swine flu) pandemic. Despite millions infected by the virus, Barack Obama did not declare it a national emergency before 20,000 Americans had been hospitalized and 1,000 had died from the virus. That was six months after the initial outbreak in California. That flu ultimately was blamed for 265,000 hospitalizations and 12,000 deaths in the United States before it was over.

What about Trump's actions on coronavirus?

Trump declared a public health emergency a week before the Diamond Princess went into quarantine in Japan. It was only 10 days after the first coronavirus case was identified in the United States in a man who returned to Seattle from Wuhan, China. Interestingly, Seattle appears to the the area that now appears most at risk for new cases emerging.

Senator Chuck Schumer (D-NY) called the travel ban "premature" and a "war on immigrants" shortly after Trump put the policy into effect. 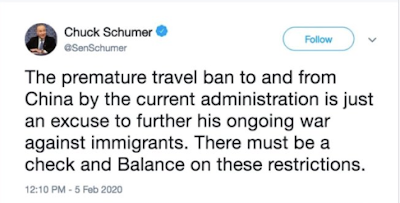 Schumer has recently deleted this tweet. I wonder why?

What was one of the reasons that the Trump decisions were quickly criticized?

Democrats and some in the media complained that the White House task force that had briefed Trump on the cornonavirus situation, that led to the decisions that were made, lacked "diversity".

Is this where we are now? Health decisions are not legitimate if there is a lack of diversity?

Does this mean under Medicare for All it will be required to get a second opinion from a doctor of color? Or your surgery will not be paid for unless it is performed by a transgender surgeon?

Of course, anyone should now know how important those proactive steps made by Trump and his advisors were to buy the United States additional time to deal with the pandemic.

If you doubt that, look at this chart from the WSJ's Daily Shot (as of February 28) that compares the identified cases in the United States to other countries based on where the virus was caught. 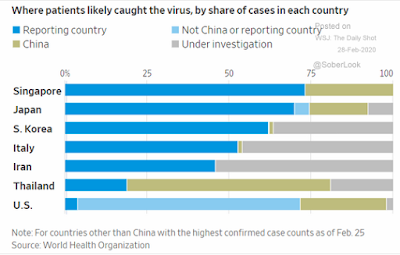 At that point, only one of the cases of the virus in the States had been identified as having been caught in the United States. Most cases were from American passengers on the Diamond Princess who caught the virus on the ship and were subsequently repatriated to the United States.

Compare that to the other countries which were seeing much higher incidences of community infection due to the fact that they did not implement restrictive border rules as quickly as the United States did.

All that being said, we are now at point we are almost certain to see a large increase in identified cases in the United States over the next several weeks.

The virus is clearly out in the community, in particular in Washington state and California.

Test kits are more readily available now, and as more are tested, we are are undoubtedly going to find many more cases of the virus.

This will also result in more short-term panic. It is an expected human response in dealing with the unknown. There are many things we are not sure about involving this virus right now. How long is the incubation period? What is the true mortality rate? How safe am I?

Panic driven by the unknown right now seems to be a bigger danger to all of us than the virus. We have seen what happened to the stock market last week. Of course, financial markets loath uncertainty and we have seen that in volumes in the past week.

We have already seen international air travel drop dramatically. I would expect that we will soon see the same in domestic air travel. I would expect restaurants, bars, theaters and other venues that host large numbers of people around Seattle, and in places in California where cases have been identified, will see precipitous drops in business. Retail shops will also suffer except for grocery stores which may struggle to keep their shelves full due to panic buying.

We may see this story unfold across this country if the virus cannot be contained. It may get very, very ugly before it gets better. Most people will survive the virus. It is an open question how many will survive the potential economic fallout.

What is most interesting to me is comparing the reaction to the H1N1 flu in 2009 with what is going on right now.

How many people even remember that flu as a big deal even though it was only a decade ago?

There were plenty of other things to be concerned with in 2009. Unemployment was almost 10% and the Dow Jones was below 9,000. When the coronavirus panic started we were at 3.5% unemployment and over 29,000 on the Dow.

The media was not out there pounding on Obama for six months even though 1,000 Americans had died before he took any substantive action at all.

We did not have the level of hatred exhibited toward the President we see today where many Democrats and members of the mainstream media seem to be rooting for bad things for the country in order to defeat Donald Trump in the upcoming election.

I often say that context is everything when assessing anything.

It could not be truer than in comparing the tale of these two flu pandemics.

Where does it all lead?

I do know that human beings are often their worst enemies. Charles Mackay called it the "madness of crowds" back in the 16th century.

Franklin Delano Roosevelt said "the only thing we have to fear is fear itself" when the United States was in the depths of the Great Depression. That also seems entirely appropriate advice for us right now.

First and foremost, as FDR showed, it is the job of the President to inspire confidence and lead with a steady hand.

Critics of Trump say he has not done enough. Of course, as shown above, they also said early on that he was doing too much or he was consulting with the wrong people.

President Trump was asked in his recent press conference whether it was just inevitable that we would see a full fledged pandemic outbreak in the United States.

As I wrote recently, speaking pessimistically and unconfidently is just not in Trump's DNA.

What did Barack Obama say about the swine flu as it was similarly emerging.

"We are closely monitoring the emerging cases of swine flu in the United States. This is obviously a cause for concern and requires a heightened state of alert. But it is not a cause for alarm,"


Even though this is very similar in tone to what Trump has been saying why is the media playing it so differently?

Such is the tale of two flu pandemics.

Why does politics have to be interjected into this at all?

What everyone should be doing right now is getting down on their hands and knees and blessing
our medical professionals who will soon have all hands on deck on the front lines in fighting this virus for us.

What can we do?

For most people it is the same advice that Barack Obama gave in 2009.

Stay home if you're sick, wash your hands frequently, cover your sneezes with your sleeve, not your hands. And take all the necessary precautions to stay healthy. I know it sounds simple but it's important and it works.


When Trump says this he is not serious and not preparing us.

On the other hand, Obama had such a way with words it was hard to ignore him.

If you don't like Trump, then take the advice of Obama

Such is the tale of two pandemics.