Surreal Is Our New Reality

I could call it surreal.

However, it is our new reality.

It is stunning the extent that which our lives have been transformed in the last 10 days.

Surreal is our new reality. All sporting events cancelled. Schools closed. Cruise lines shut down. Air travel at a near standstill. Restaurants and bars shut down. Shopping malls closed. Millions trying to work from home. Millions of others suddenly out of work.

I wrote this on January 31 when we were barely a week past the first coronavirus case being reported in the United States.

We often don't realize the precarious perch that our lives are built on. A lot of that is based on the confidence that underlies our economic system. It doesn't take much to disrupt that equilibrium and the confidence that goes with it. When people don't have the confidence to do business, shop, travel and interact, the economy quickly tanks.


People are now realizing what I was talking about. I wish it were not true.

I have to believe that we will soon experience unemployment rates that will exceed anything that most of us have seen in our lifetimes.

If the current surreal reality continues for several months we may challenge some of the numbers seen in the Great Depression. 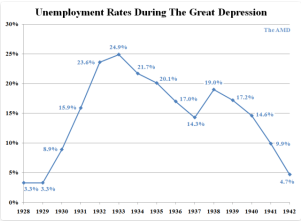 Jobless claims soared to 281,000 last week and that was before most of the restaurant, bar, store and theater closings that went into effect this week. We will soon these numbers in the millions. 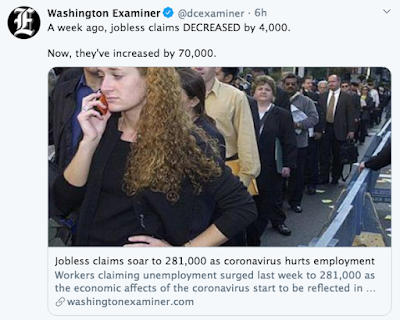 Of course, I don't need to say anything about the stock market. 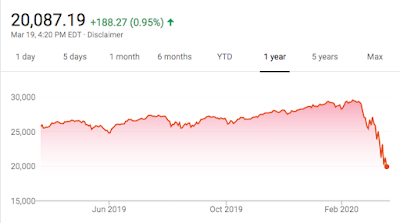 Over $12 trillion of value has been wiped out in less than a month in the United States alone. Global values have taken somewhere near a $25 trillion hit.


That value evaporated faster than in any stock market sell-off in history. 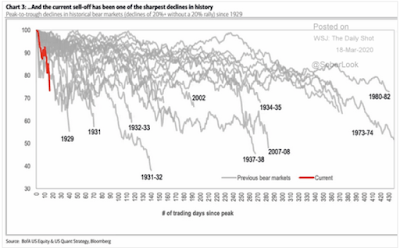 Washington is talking about a $1 trillion economic aid package. That seems like a lot until you put it into a broader perspective.

I have not heard many talk about it but we are surely blessed in all of this that we are taking this economic hit at a time when we were at an economic high. Stocks were at all-time highs. Unemployment was the lowest in almost half a century. It would be far, far worse having to deal with a poor economy and struggling stock market before we were hit with this pandemic. 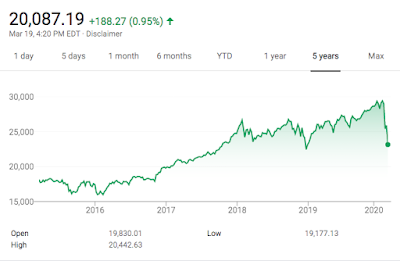 There is a reason that pilots attempt to climb if they run into a problem in the air. It always helps to have as much altitude as you can when you are flying an airplane. The more altitude you have, the greater margin you have to overcome any issue, and the better chance you will have to land the aircraft safely. The strong economy over the last three years is a significant advantage for us compared to where we could be.

It is hard not to ask the question whether all of this surreal reality is worth it?

We will likely never know. Once a course is taken it is often impossible to consider the alternative. Whatever decision is made is quickly affected by other choices and actions that compound and don't permit one to easily determine if the "road not taken" might have actually been a better path. Mind you, I did not say easier. There are no easy roads whichever way we go right now.

I have no doubt that the public health professionals are making the best recommendations and decisions they can based on what data they have. However, the problem is that we are dealing with so many unknowns with this virus.

John P.A. Ioannidis is professor of medicine, of epidemiology and population health, of biomedical data science, and of statistics at Stanford University and co-director of Stanford’s Meta-Research Innovation Center. In other words, he is someone that knows a whole lot more about this than I do.

At a time when everyone needs better information, from disease modelers and governments to people quarantined or just social distancing, we lack reliable evidence on how many people have been infected with SARS-CoV-2 or who continue to become infected. Better information is needed to guide decisions and actions of monumental significance and to monitor their impact.

Draconian countermeasures have been adopted in many countries. If the pandemic dissipates — either on its own or because of these measures — short-term extreme social distancing and lockdowns may be bearable. How long, though, should measures like these be continued if the pandemic churns across the globe unabated? How can policymakers tell if they are doing more good than harm?


I am persuaded that the current path we are on for this two week period makes the most sense right now since it is better to err on the side of caution.

However, how long can this be sustained and at what cost?

Even more than new therapeutics and vaccines, what we need most right now is better data to assess the threat and danger to society of the virus together with the ultimate economic cost that we may have to pay to combat it. Rationale minds need to then balance those two important factors as it relates to our society.

At one point is the cure worse than the disease?

How bad is Covid-19? We just don't know right now. It is still playing out.

However, the Visual Capitalist put together this excellent graphic to show the history of the world's greatest pandemics. 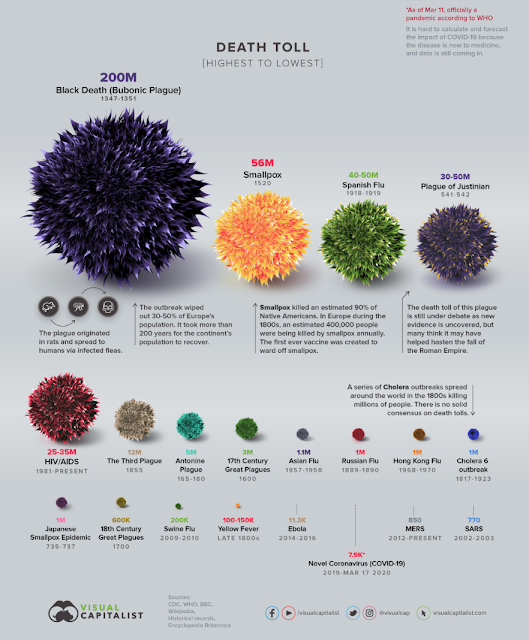 There truly is nothing new under the sun. Mankind has been challenged before and come out better on the other side. We will once again.

However, the human costs of most of these pandemics have been extraordinarily high in lives lost.

May we get the best data available as soon as possible to make sure that we are making the best decisions to limit the human costs, first and foremost. That is not necessarily easy as Dr, Ioannidis points out.

One of the bottom lines is that we don’t know how long social distancing measures and lockdowns can be maintained without major consequences to the economy, society, and mental health. Unpredictable evolutions may ensue, including financial crisis, unrest, civil strife, war, and a meltdown of the social fabric. At a minimum, we need unbiased prevalence and incidence data for the evolving infectious load to guide decision-making.


Surreal only works for so long. Every click of the clock the human cost will compound one direction or the other as relentlessly as the virus spreads in communities in the United States and the world.

We need better data if we are going to make better decisions.

The sooner the better. That is the real reality.