Mrs. BeeLine and I have spent a fair amount of time on cruise ships over the last few years.

It is a very convenient way to travel. It is a cost effective way to view a number of locales on one trip. It is relaxing. It is a great way to meet new and interesting people from around the world.

There is also no doubt that when you cruise you are floating in a germ factory when you are in close quarters with thousands of other human beings as you sail the seven seas.

When we cruise we always pack an industrial size pack of Lysol wipes and a large can of Lysol spray. Those are used to wipe down and spray every surface in our cabin before we touch anything. That includes spraying the HVAC vents.

We wash our hands religiously before every meal. We use the hand sanitizers around the ship constantly. We avoid touching any bannisters or railings everywhere we can. If we need to steady ourselves going up or down stairs we use the inside crook of our arm. We try to avoid the elevators when we can and use the stairs. We only touch the buttons on the elevator with our knuckle rather than our fingers.

On a ship you see clear evidence of herd behavior. On ships that place a steward at the front of the buffet venue the first few days of the cruise directing people to wash their hands before entering, you see a high percentage of people doing this the rest of the cruise. On ships that don't do this, you see very little compliance with hand washing. This does not make Mrs. BeeLine very happy.

The coronavirus has put a particular spotlight on the cruise industry.

First, we had the Diamond Princess situation in which the ship was quarantined in the harbor at Yokohama, Japan with 3,711 passengers and crew members. Over 700 on the ship ultimately tested positive for the virus. 46 were Americans.

This is a picture I took from our cabin when we were docked in Yokohama two years ago. It is a beautiful sight but I don't know if it would look as good if this was the only thing you had to look at for two weeks.

Shortly after the Diamond Princess began its quarantine, Holland America's Westerdam was stranded at sea for several days as five different ports in Asia refused to give it permission to dock after it had been to China. Cambodia ultimately allowed the ship to dock and it turned out that one passenger had a mild case of the virus.

Holland America had to subsequently cancel all future sailings in Asia for the next several months as have other major cruise lines.

The latest cruise ship that is now dealing with coronavirus is the Grand Princess. This is a picture I took of that ship as it was leaving San Francisco several years ago. You can see Alcatraz Island just to the left of the bow of the ship.

21 (19 crew, 2 passengers) on the ship have tested positive for the virus so far. A passenger on a previous cruise two weeks ago had developed symptoms when they got home and recently passed away. Public health officials determined that the passenger most likely had acquired the virus on the ship leading to increased scrutiny. The latest news is the passengers will disembark in Oakland, CA i n the next couple of days and then be quarantined at various facilities around the country.

All of this is bad news for the cruise industry.

However, I believe it is going to get much, much worse.

The Diamond Princess episode caused the cancellation of almost all cruise with stops in China, Hong Kong and Singapore. This has to now also include Japan and South Korea.

Many lines have been prohibited passengers who were from China (or who were recently in China) from boarding their ships. For example, some friends recently returned from a Caribbean cruise in which the cruise line was not allowing anyone from China, Hong Kong or Macau (or who had been there recently) to board the ship.

What do the cruise lines do now?  The list is getting long of those places that are hot spots. There are also not many places that can be considered totally safe. Korea? Italy? Iran? Seattle?

The cruise industry is also heavily reliant on an older demographic for a large portion of its revenues. This is also the group that experts are now saying carries the most risk from the virus. It has also recently been recommended that those over age 60 should avoid unnecessary air travel or venues with lots of people. Is going on a cruise necessary for anyone?

Dr. Anothory Fauci of the National Institute for Allergies and Infectious Diseases was pretty direct in an appearance on Meet the Press on Sunday. 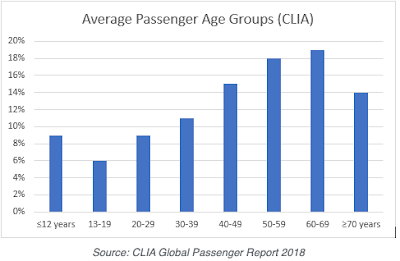 You have to think that more and more of these people are not going to get on an airplane to congregate with 3,000-4,000 people on a ship.

The cruise industry will also soon be beginning its Alaska cruise season that heavily relies on Seattle and Vancouver as the major port cities. I had read that some cruise lines were also planning to take ships out of the Asia market and reposition them to Alaska. That might not work.

Seattle now seems to be ground zero for the virus in the United States. 17 of the 20 US. deaths from COVID-19 have been in Washington state. I would not be surprised to soon see Vancouver become the leading hot spot for the virus in Canada. Canada did not stop flights to China as early as the United States and the proximity to Seattle practically guarantees that we will see community transmission between the two areas.

All in all, I see a lot of rough seas ahead for the cruise industry before public confidence is regained.

Vice President Pence met with cruise line executives in Florida on Friday and urged them to step up efforts on protecting passengers, crew and the ports they visit from the virus.

Pence said that over the next 72 hours, cruise lines will work with federal officials and the Centers for Disease Control and Prevention to screen more passengers for the coronavirus before they board ships, establish onboard testing and develop a plan to move anyone who has contracted the virus to land quickly.


That will help but I have doubts whether that will do enough to restore the confidence the cruise industry is going to need to get passengers on those ships in the near term.

For example, 2/3 of those responded in a recent survey that they would not go on a cruise even if it was offered to them for free! It was 77% for those age 65 and older.

Carnival Corporation (the owner Princess Cruise Lines) has seem its stock almost cut in half since the first of the year.

This is the chart of the stock over the last one month. 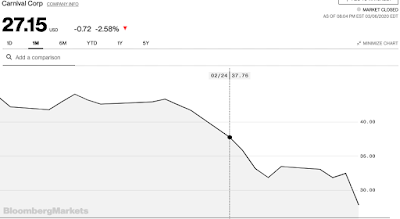 As bad as I see the situation of the cruise industry dealing with the coronavirus, Iran seems to be on verge of being in even worse straits.

The disease seems to be raging through Iran in ways not seen elsewhere. A large number of members of parliament and other public officials have been infected. A number have died. The virus also seems to be claiming a significant number of health professionals, including doctors and nurses, and members of the police and security forces. Therefore, in Iran the virus is attacking some of the  foundations of the society that will not be easily replaced when the epidemic ends.

Of course, with Iran, you never know if you are getting the whole story. However, even with what they are disclosing, it does not look good. Reports from within Iran are the numbers are much, more worse that what the government is admitting.

These are the most recent worldwide numbers on the extent of the virus by country. The disease is accelerating faster in Iran than anywhere else in the world right now.

I am following @aliostad on Twitter who is an Iranian who lives in the UK and is monitoring various news and social media sites in Iran and translating them to English. His reports paint a grim picture of what is going on in Iran. Here are a few recent tweets to provide you some context. 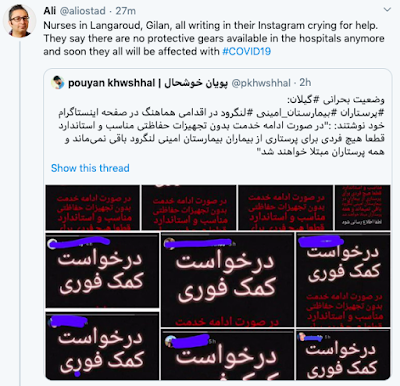 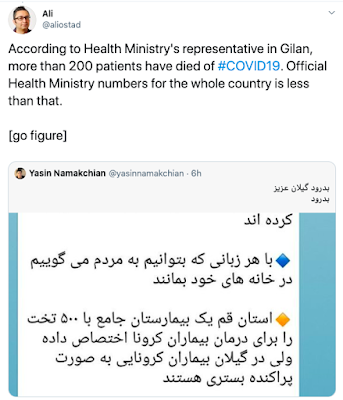 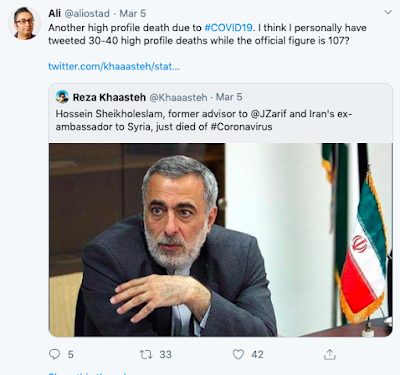 Prayers for the Iranian people.

As bad as the cruise blues might be, you have to think that the percentage who would accept an all-expenses trip to Iran right now would have to be close to 0%.