Trying To Find It In The Numbers

The public health scientists advising President Trump finally decided to unveil their models to the American people yesterday in a sober data-driven presentation.

If their objective was to shock the public with the numbers, their mission was clearly achieved.

The model is projecting 100,000-240,000 deaths over the next two months and that assumes that all of the current social distancing, school and business closures are continued for those two months.

The peak in deaths is currently projected to occur two weeks from now on April 15.

This is a graphic view of the model showing projected deaths as shown at the briefing.

We are to expect a very steep increase over the next two weeks following by a slow, descending decrease in deaths that would generally end around July 1.

Even at the low end, 100,000 deaths is a very big number. For that to occur in a two-month period is beyond sobering.

President Trump has compared this to fighting a war. If you compare this to combat deaths in U.S. wars this number would only be exceeded by deaths in World War II and the Civil War. Total deaths in World War I were higher (116,708) but many of the non-combat deaths were due to, ironically, the Spanish flu epidemic. Of course, those wars were each fought over about 4 years. We are talking about this number of death over the course of two months.

Framed this way it is not difficult to see why President Trump has taken the actions he has.

However, it is important to remember that all of these projections are from a model. A model that uses inputs that are based on a set of assumptions.

The New York Times has its own interactive model in which anyone can input different variable assumptions and it will give a projection of expected cases, hospitalizations and deaths.

The first image is what the model looked like assuming that absolutely no interventions were initiated, an assumed moderate impact for warm weather, hospital rate of 11%, infection rate of 2.5% and death rate of 1%.

The infection rate assumption assumes that Covid-19 (2.5R0) is 67% more contagious than the seasonal flu (1.5R0) and results in 10x more hospitalizations and deaths. At this point that is considered the best guess on these variables by scientists but the fact is that none of these factors are known for sure. More research and study is needed. 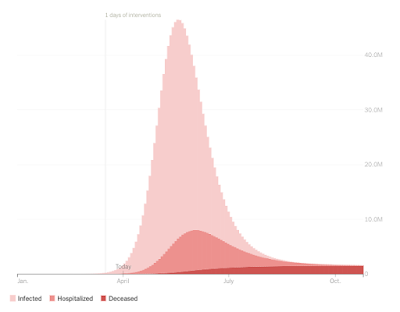 This is how the New York Times model looked at the end of the initial 15-day social distancing measures that President Trump put in place assuming everything else was the same. The model suggests some benefit but it would not drastically alter the final outcomes. 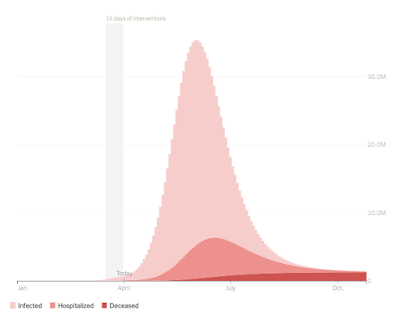 This is what the model looks like with an additional 30 days of social distancing as we are doing now. You can see it has a significant effect. 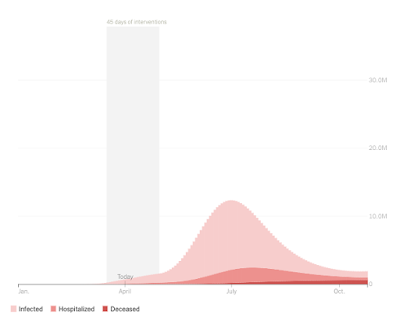 However, I was interested in playing with a range of  variables to see what would have the largest impact. I only found one that had a gigantic effect.

If that is the assumption I made after considering the first 15 days of social distancing, and leave everything else the same, what does the graph look like? (Compare below graph to 2nd graph from the top).

You hardly can see any effect from virus. That shows you how sensitive these models are to the assumptions.

That is massive. That entire reduction comes from assuming a 2.5 R0 infection rate compared to 2.0 R0. Again, seasonal flu has a 1.5 R0. 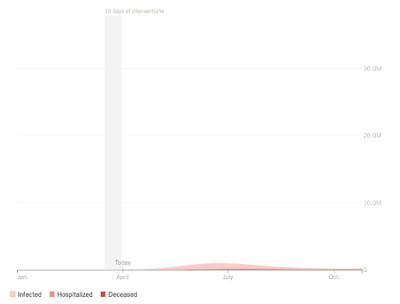 Let's get some additional perspective on the issue of deaths by comparing the projected numbers we are hearing compared to what we might see in more "normal" times.

The CDC collects detailed records on influenza and pneumonia deaths each year during flu season. That data is also compared to total deaths to provide better perspective on how bad the flu season has been in creating excess mortality.

Here is the graph of national pneumonia and influenza (P&I) deaths over the last five years thru March 14, 2020. This is the most current data as it usually is reported with a two week lag.

This is the graph for New York state for the period thru March 14. It indicates that seasonal flu deaths in New York were actually running below normal in the state until two weeks ago.

It had 44 reported deaths for Covid-19 for the week ended March 21.

In four days this week New York has had 1,213 deaths already.

Assuming that on average there are about 3,000 deaths per week in New York for all causes, there is little question we are seeing a lot of excess mortality from Covid-19 than from seasonal flu.

However, what about other states?

Here is the 5-year chart for Ohio thru March 14. You have to disregard the last couple of data points in this graph because the information is not complete. However, you should notice that Ohio typically peaks at about 7% deaths compared to New York's 10% in the winter months. Population density has to be a big reason for that among other factors

Ohio had an estimated 115 deaths from P&I in the week ended March 14.

It had 3 reported deaths from Covid-19 for the week ended March 21.

That would only be 1% of all deaths in the state. This probably would not even be noticed but for the intense scrutiny around Covid-19

As you can  from all of this, the numbers surrounding this entire issue are incredibly difficult to assess and evaluate.

Is this aggressive action taken in response to Covid-19 in the New York City metro area appropriate?

The models and the reality both say YES. There is little question that they are in the middle of a full blown health crisis.

Can the same be said for other parts of the country that don't have the same population density and have the same exposure to international travelers?

Dr. Birx says that the models they are relying on assume the same trajectory for the virus for the rest of the country as we are seeing in the New York numbers.

Using NYC experience and extrapolating it to the rest of the country seems like flawed logic to me. The fact that many other states were more proactive on mitigation efforts also should be a positive.

As I have written before, New York was at least two weeks late in its preparations. We are seeing the cost of that delay now.

I also often say that context is everything when assessing everything.

The problem with Covid-19 is that there are both too many assumptions and too much context to make sense of most everything to do with the numbers that are in play.

There may come a day when it might be possible to make sense of the numbers. That analysis will also undoubtedly have to factor in the economic impact of the decisions that have been made.

For now, I don't think there is one person on earth that can state with true conviction whether we have made the right decisions or not.

You just can't find it in the numbers.