How Much Will The Models Cost?

I have written before that there has never been a time in the history of mankind where more has been wagered on the output of a model than we are seeing right now.

Large sums of money, and the lives of many people, have been put on the line many times throughout history. Most of those instances involved going to war with an enemy that was known and a threat that was real and very well understood.

There is no question that Covid-19 is a threat. However, there is so much we don't know and understand about the disease. Even today we still don't understand the real nature of the threat. We don't know enough about its transmission. We don't know how many people have actually been infected. As a result, we don't really know how lethal it is.

For example, research in the last few days is starting to suggest that the use of ventilators may actually be doing more harm to Covid-19 patients than good.

In the last 3–5 days, a mountain of anecdotal evidence has come out of NYC, Italy, Spain, etc. about COVID-19 and characteristics of patients who get seriously ill. It’s not only piling up but now leading to a general field-level consensus backed up by a few previously little-known studies that we’ve had it all wrong the whole time.

There is no ‘pneumonia’ nor ARDS. At least not the ARDS with established treatment protocols and procedures we’re familiar with. Ventilators are not only the wrong solution, but high pressure intubation can actually wind up causing more damage than without, not to mention complications from tracheal scarring and ulcers given the duration of intubation often required… They may still have a use in the immediate future for patients too far to bring back with this newfound knowledge, but moving forward a new treatment protocol needs to be established so we stop treating patients for the wrong disease.

The past 48 hours or so have seen a huge revelation: COVID-19 causes prolonged and progressive hypoxia (starving your body of oxygen) by binding to the heme groups in hemoglobin in your red blood cells.

People are simply desaturating (losing o2 in their blood), and that’s what eventually leads to organ failures that kill them, not any form of ARDS or pneumonia.


If true, that is quite a revelation in that all of the models have used ventilators as one of the key resource restraints we would have to have to treat the disease.

It is also where tremendous sums of money have been spent by hospitals, state governments and the federal government to make sure we have enough ventilators that cost from $25,000-$50,000 each.

In fact, the federal government currently has contracts with various manufacturers for the production of tens of thousands of additional ventilators.

Let's look at what the models were telling us a week ago and compare it to where we are today.

The IHME model seems to have had the most influence on government policy makers.

This is what that model predicted exactly one week ago as to the hospital resources that would be required today (April 9) in New York.

9,427 ventilators would be necessary.

Keep in mind that this was not a model from one month ago. It was a model that was projected needs one week ago on April 2.

What are the actual numbers reported today by New York State?

Ventilators being used. (No numbers released but ICU is only about half of what ventilator projection was for this date)

What about my home state of Ohio?

This is the projection of hospital resource utilization in Ohio in the IHME model for today from one week ago.

What are the actual numbers reported on April 9?

No numbers provided on ventilators being used. However, the numbers in ICU are just over 2/3 of the number of ventilators that were projected to be required.

If you want to get an idea of how faulty the models and the logic that surrounds the reaction to the virus in Ohio is, consider this slide that Governor Mike Dewine recently used to show the success of the stay at home order and other mitigation efforts. (Hat tip to @AlexBerenson for pointing this out.) 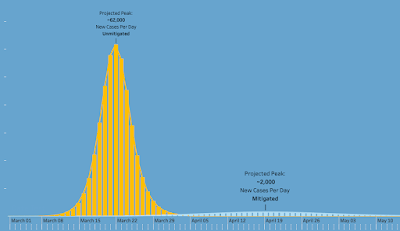 Notice how this model shows a peak of 62,000 new cases if no mitigation efforts were undertaken.

However, also notice that the model shows a peak date of March 22.

When did the stay-at-home order in Ohio become effective? March 23. That is one day after the supposed peak according to the model.

Granted, Dewine closed the schools, bars and restaurants effective March 16. However, the fact is that it generally takes 5-7 days from the time someone is infected until symptoms manifest. Most cases showing up on March 22-23 would have resulted from people picking up the virus before most mitigation efforts had been implemented.

It should be noted that Dewine also banned any mass gatherings of 100+ on March 12. That could be responsible for the drop in cases from the original model. Do these numbers also suggest that this mitigation approach might have the greatest benefit at the least cost? It is worth considering. Was it really necessary to do everything else that was done?

How many confirmed cases were there in Ohio on March 23?

2,023 TOTAL CASES. That is not a daily count as shown in the graph. Those are all the cases.

The actual daily count of new cases on that date was 146.

That is the count the Ohio Department of Health is using today (April 9, 2020).

On March 23, this is what they were reporting at the time the stay-at-home order went into effect. The numbers have been revised upwards since that time.

The actual number of new cases on that day were 146 and almost all of those new cases involved infections that had to be received before any mitigation efforts went into effect.

That means the model was off by 99.76% compared to actual results.

Below is Governor Dewine on Twitter extolling the great success of the mitigation efforts in Ohio compared to the original model.

For additional context, it was just over 10 days ago that Ohio's model was suggesting that we would see 10,000 new cases per day at the peak of the crisis in mid-May with full mitigation efforts in place. It was at that point I lost all confidence in the models Ohio or anyone else was using. I wrote in detail about my skepticism about the models being used in Ohio and elsewhere on March 29. I predicted that they would be proven wrong. 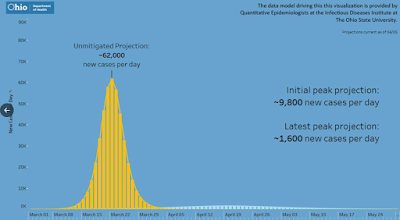 In other words, Dewine is taking credit for mitigation efforts for reducing cases in which a model had predicted would occur before almost anything was actually done!

That is quite a feat.

Let's be clear. I am not suggesting that the mitigation efforts have not been effective. They clearly have been. As stated, the ban on mass gatherings might be proven in the end to have produced the greatest bang for the buck. There is no doubt that fewer cases and fewer deaths have resulted from all of this social distancing.

If you doubt that take a look at this chart from HealthWeather.US which tracks readings from smart thermometers around the country and allows for the surveillance of fever-based seasonal illnesses such as influenza and Covid-19 in the United States.

This chart shows these illnesses were following a typical seasonal path until the beginning of March when we began to see atypical experience. That is when Covid-19  started to take hold in the country. The variance reached a peak on March 16 with about 5.1% of the population showing signs of illness compared to an expected 4.2%. Interestingly, this is also the exact time that many states started social distancing rules.


You can see what happened next. Fever-related illnesses went into free fall. At this point, we have succeeded in almost completely wiping out all fever-based illnesses in the country. We are currently at 0.42% compared to an expected 2.66%!

However, the question in all of this is what are we supposed to compare these models to?

You can readily see that the model Ohio was relying on was flawed.

You can see the the IHME model was flawed.

We have seen success but at what cost?

Do the benefits outweigh the costs?

We are likely to see many more politicians and public heath experts bringing out the models and showing us what a great job they did as the Covid-19 crisis winds down.

Will those results be justified by the economic costs that have been incurred?

That question is likely to be with us for a very, very long time.

It practically begs for someone to create another model to help us determine the answer. 😀