One Vote Away From Pure Madness

Right after a nursing home, the place you would least like to be in the Covid-19 world we live in right now is in a prison.

More positive cases are being found in prisons than anywhere else. The good news is that most prisoners are younger than those in nursing homes so the virus is not as fatal.

In Ohio's Marion Correctional Institution, 2,011 of the inmates--80% of the prison population-- have tested positive for Covid-19.

However, the death count in Marion County, where the prison is located, only numbers four at this point. That is only .2%, about the same fatality rate as the seasonal flu.

Another prison in Ohio, Pickaway Correctional Institution, has seen more than 1,500 inmates and 81 staff members with confirmed cases.

A prison in Arkansas is reporting 850 prisoners and 10 staff members with the virus at one facility. All in all, 38% of all Covid-19 cases in the state are at that single prison.

You can find similar stories at state prisons in New York, Massachusetts, Tennessee, North Carolina as well as within the federal prison system.

The high level of risk for infections has led many state Governors to grant early release to some prisoners. Most of these prisoners have been near the end of their sentence, older in age or imprisoned for lesser crimes.

However, in the state of Washington a liberal legal activist group filed a petition arguing that the lives of thousands of prisoners in the state's prisons were being endangered by being incarcerated and should be released. The petition argued that leaving failing to release the prisoners violated the "cruel punishment" clause of the state's constitution.

That group argued in its petition before the state's Supreme Court that all inmates over the age of 50, those with early release dates, or with serious risk or harm from Covid-19 due to underlying medical conditions, should be released .

It didn't matter that some of the inmates were serving time for serious crimes such as assault, rape and murder.

Among the group that the legal activists argued should be freed was infamous serial killer Gary Ridgeway.

Ridgeway, also known as “the Green River Killer,” was sentenced to 500 years in prison in 2003 after being convicted of murdering 49 women, many of whom were prostitutes, in the 1980s and 1990s. He later confessed to murdering upward of 80 women.

This is a description of the kind of acts that put Ridgeway, age 71, behind bars for 500 years. It seems to me it might have been too light a sentence.


He would take the women and girls, have sex with them, and then strangle them, watching the light go out of their eyes as he squeezed the life out of them. Sometimes he’d use a rope and sometimes he’d use his bare hands. He’d pose their bodies and sometimes come back and have sex with the corpses. His first victims were found in the Green River, giving the monster his moniker.


All in all, the petitioners sought to have 2/3 of all of the prisoners in the state prison system, released into the community.

The Attorney General’s Office placed the number of inmates in those categories where release was requested at 11,715 including 5,272 who have committed serious violent offenses such as murder, assault, and rape.

To their credit, the Governor and Attorney General opposed the petition for release.

You might think there would be no chance that any court anywhere would grant such an outlandish petition.

This petition was narrowly denied in a 5-4 vote of the Washington Supreme Court. A mere one vote among the justices of the court kept Gary Ridgeway and other serial killers, murderers and rapists from walking free into the community.

Let's put all of this in context.

Gary Ridgeway confessed to the murder of upwards of 80 women. That is why he was sentenced to 500 years in prison.

Can you guess how many women under the age of 60 have died because of Covid-19 in Washington state thus far?

In other words, Gary Ridgeway confessed to killing twice as many women as have died from Covid-19  under the age of 60 since the epidemic started in the state.

However, legal activists wanted to release Ridgeway from prison because of a threat or harm to him from Covid-19?

Who knows how many other lives were ended or altered forever by the other 11,714 prisoners that the four justices wanted to release?

Is this pure madness?

Pure madness is the fact that the state of Washington was just one vote away from actually doing it.

Here are the nine justices of the Washington Supreme Court.

Justices Gonzalez, McCloud, Yu and Montoya-Lewis were the four votes favoring release of the inmates. 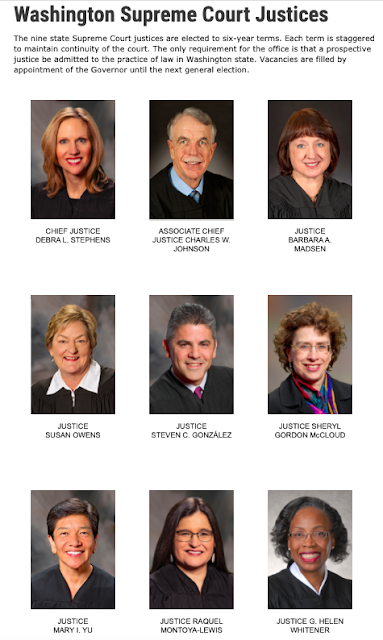 (Hat tip to BeeLine reader JWA for making me aware of this decision.)
Posted by BeeLine at 10:40 PM