Regular readers of BeeLine know I am a big believer in providing context around an issue.

As I often say, context is everything when assessing anything.

There is no subject that requires more context when assessing anything than most information you hear about Covid-19. It is almost impossible to wrap your mind around all of the numbers and economic implications.

A little context around Covid-19 that I recently have found interesting.

We often hear that Covid-19 is more deadly to those that are older. It is not just their age. It is also where they have been living. Here is a little context on that issue that shows how many deaths in major European countries have come from people living in nursing homes.

Over half of the combined deaths in these countries are from residents of nursing homes.

Sweden has gotten a lot of attention around the world by not closing its schools and shutting down its economy as many countries have done. Many have argued that Sweden will regret that decision. However, let's put that argument into context.

Recent data from Sweden suggests that deaths have already peaked and are now declining in that country.


Sweden has about the same population as the state of Georgia in the USA. (approx. 10 million).

Here is the graph of deaths in Georgia by date. Sweden's death rate per capita is about double that of Georgia but the slopes of the graphs are remarkably similar going up, peaking and heading down on a similar timeline.

I thought it was also interesting to see the age distribution of deaths in Sweden.

23% of all deaths in Sweden have been from people age 90 or older.

Deaths from those under age 50 almost do not show up on the graph.


For context, here is the most recent data from Florida. Note that the age distribution of deaths in Florida is very similar to Sweden.

Also of note is the fact that Florida's deaths per capita are 1/4 of that in Sweden. Recall that Governor DeSantis was heavily criticized for not instituting a stay-at-home order for the entire state until April 1. That was at least two weeks after most other major states took that action. 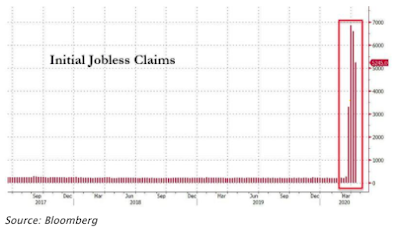 That is about the same number of jobs that have been created in the last 10 years in the United States.

In other words, what it took a decade to create has been demolished in one month.

Effects of Economic Impacts of Covid-19 by Age

Everyone has been affected by the economic effects of Covid-19. However, this survey by Data for Progress shows that younger voters have been hit especially hard. 33% of all voters say they have lost their job, been placed on leave or had their work hours cut. However, 52% of those under age 45 have been affected in this way. It is only 26% for those age 45 or older. 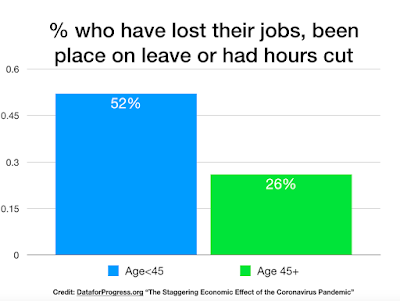 How much time would it take to test everyone in the USA for Covid-19?

Some are saying that the United States should not open the economy until everyone can be tested for Covid-19.

How long would that take?

Let's look at some numbers assuming one test is administered every second of the day, 24 hours a day, 7 days a week until everyone has gotten tested.

60 tests in one minute

There are an estimated 328 million people in the United States.

At one test per second it would take over 10 years to test everyone in the United States.

Can we wait 10 years to open up the country?

Even at 10 tests per second it would take one year. That would mean conducting 864,000 tests per day. That is over 5 times that number we are doing per day right now.

These numbers also provide context on the incredible progress in testing in the United States over the last month.

People are really staying at home

Why have oil prices gone into free fall? All cruise ships are sitting idle. Air travel is down 96% from last year. Miles driven by personal vehicles since February 2 looks like this. 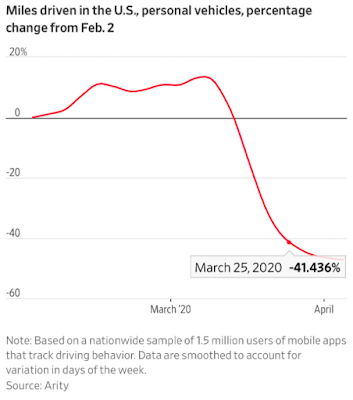 Most people don't even want to look at their stock values or 401(k) balances with all the bad news they hear each day about the economy.

One thing we all should be thankful for is that this Covid-19 crisis did not occur in 2008/2009. We had some margin to provide some cushion for the economic shock. That also applies to the employment numbers.

A few pieces of good news that most people are not aware of.

NASDAQ stock average is actually higher today than it was 6 months ago. 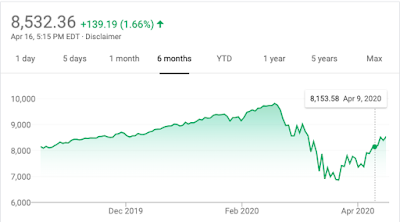 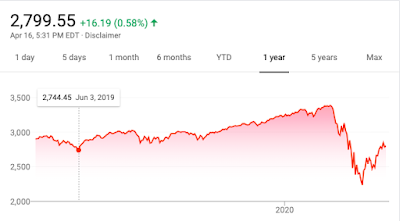 These factoids would normally be good cocktail conversation to share with friends this weekend.

I guess your best option is to forward this information to a friend.