As I have studied the data from Covid-19 it is impossible to not see the enormous disparity between the cases (and deaths) in the New York City metro area compared to the rest of the United States.

For example, look at this graphic that Dr. Birx showed at the Saturday briefing that compared the New York City metro area to all other major metro areas in the United States. 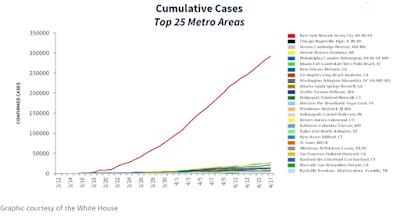 The New York City metro area has over 10 times as many cases as the next highest metro area.

You can also see how New York City impacts the state of New York and New Jersey from this slide that Dr. Birx also shared at the briefing. 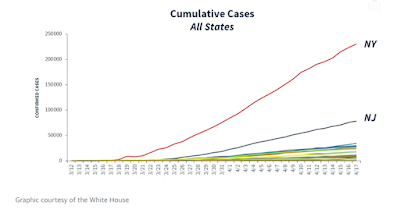 One answer is population density.

New York City has the highest population density of any major city in the United States and two other cities in the metro area (Jersey City, NJ and Newark, NJ are also in the top 10).


The large number of international travelers into the major New York City gateway hub airports (JFK and Newark) also made the area more vulnerable to other metro areas than other cities initially.

However, as I study the data it seems inescapable to me that a large reason for the spread of the virus in the New York metro area is the large use of public transit by the population.

For example, here is public transit usage in the New York City metro area compared to other major metro areas in the Unites States.


The New York City metro area has more than ten times as many passenger trips on public transit as the next largest city. In fact, it has more public transit trips than all of other cities combined on this chart.

The reality is that most who work in New York City get to their jobs by public transit. They take the subway or the bus in the city. It they live in New Jersey, Westchester, Long Island or Connecticut, and work in the city, they are most likely commuting into the city on a train.

For example, the New York City subway system alone had about 5 million turnstile entries on a typical weekday before the Covid-19 outbreak.

Of course, each of those trains or buses is a vector for transmission of the virus. They are crowded and people are contained in a tight, constrained space.

Why does the New York metro area have half of the cases and deaths in the United States?

Could it be because half of all the public transit trips in the country are also in the New York City metro area?

My thesis seems to also be supported by a recent paper from an MIT economist who has just published a paper entitled "The Subways Seeded the Massive Coronavirus Epidemic in New York City".

This is the abstract of that paper.

New York City’s multitentacled subway system was a major disseminator – if not the principal transmission vehicle – of coronavirus infection during the initial takeoff of the massive epidemic that became evident throughout the city during March 2020. The near shutoff of subway ridership in Manhattan – down by over 90 percent at the end of March – correlates strongly with the substantial increase in the doubling time of new cases in this borough.

Maps of subway station turnstile entries, superimposed upon zip code-level maps             of reported coronavirus incidence, are strongly consistent with subway-facilitated             disease propagation. Local train lines appear to have a higher propensity to                     transmit infection than express lines. Reciprocal seeding of infection appears to               be the best explanation for the emergence of a single hotspot in Midtown West in               Manhattan.

Bus hubs may have served as secondary transmission routes out to the   periphery of the city.

In that people in the New York metro area rely on public transit to get to their jobs how does New York City "work" in the Covid-19 world?

How will New York City truly get back to work if the major method they use to do that could be the major transmitter of the virus in the community?

It appears to me that New York City metro is facing an enormous challenge in getting back to anything close to normal considering the transportation model that the area relies on.

The proximity that New York City has provided for business, finance, entertainment, media and other sectors of the economy has always been an asset to that metro area. However, in an era of social distancing, proximity has become a huge liability.

What good does social distancing do at work, in a restaurant or at another venue if you first need to travel there by public transportation?

How does social distancing work with public transit?

The only answer would appear to be more trains and buses, limits on passengers per train or bus, and extensive and continual disinfection procedures of subway cars, turnstiles and buses to limit the risk of virus transmission.

However, this will cost enormous sums of money. That is something that the New York MTA did not have a lot of even before Covid-19. One observer called the MTA's fiscal condition "precarious" two months ago.

Ridership is down 90% since then and the New York Times recently reported that the MTA faces revenue losses of $8.5 billion by the end of the year.

This quote in the same New York Times story really says it all.

“The MTA is the economic engine of the entire region; the economy is built around the spine of the subway, buses and commuter rails,” said Lisa Daglian, executive director of the Permanent Citizens Advisory Committee to the MTA, a watchdog group.

“You can’t reopen the economy without the transit system in New York.”

It is very hard for me to see how New York City "works" in a Covid-19 world since the transit system is extricably tied to the economic system.

New York City has had more to deal with in responding to Covid-19 than anywhere else in the United States.

The path forward for New Yorkers in returning to work and a sense of normalcy might prove to be even more difficult due to their reliance on public transit.