Will We See The Peak This Week?

Will we see the peak this week on Covid-19?

That is a big question on everyone's mind.

Of course, a lot depends on what you define as the peak.

When you are dealing with an infectious disease the first thing you want to see is the point at which the exponential increase in cases slows. This indicates that some progress is being made in stopping the virus from spreading.

I shared this graph in an earlier post in which I tracked the 3-day rolling growth rate of confirmed cases in New York. The peak on that measure was reached on March 20. That number had trended down to 1.36x as of yesterday. 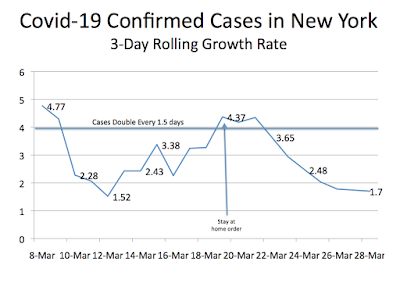 The peak you really want to see is when the number of new confirmed cases drops day over day.

New York still has not reached the point where that number is decreasing consistently on a daily
basis. 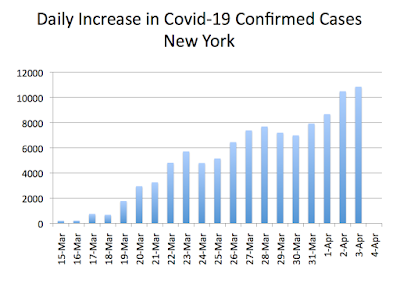 I have been watching the Hospitalization number involving Covid-19 most closely in that it is an indicator for two important factors in all of this. First, how large is the strain on our hospital system going to be. Second, it should gives us an idea of where the death rate is going to go. As more patients need to be hospitalized it follows that deaths will increase as well. 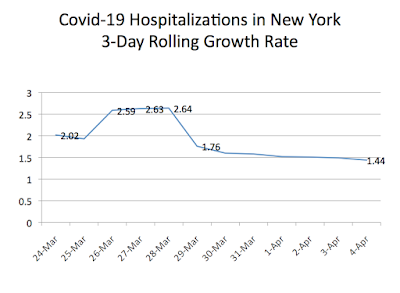 Notice that the peak growth rate on hospitalizations in New York was reached on March 28. That was 8 days after the the peak in the growth rate in confirmed cases was reached.

The good news in looking at the data is that the increase in the 3-day rolling growth rate for deaths also peaked around the same time rather than lagging the hospitalization rate. This might suggest that doctors have been finding better ways to treat Covid-10 patients and preventing the expected accelerated number of deaths consistent with growing confirmed cases (lagged by two weeks). 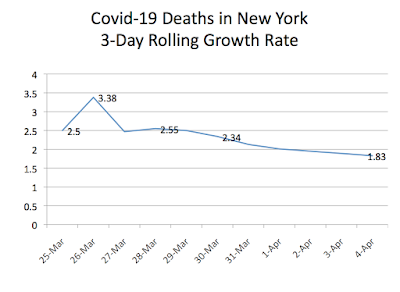 The peak most people are looking for is when the number of hospitalizations begins to decline as well as the daily count of deaths.

We are still not there on hospitalizations but, as shown above, it is slowing.

New York reported yesterday that the state had 15,905 people currently hospitalized which was an increase of 1,095 compared to the day before.


However, compare that hospitalization number with the IHME model that federal and state public health officials seem to have been following in making policy decisions.

That model suggested that 65,434 hospital beds would be needed for Covid-19 patients on April 4. That number would include 12,011 ICU beds.

Right now only 24% of the hospital beds and 34% of the ICU beds that were projected to be needed are being utilized. 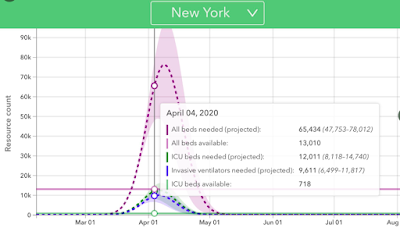 That is clearly good news but consider the mobilization effort that has been required (hospital ship, field hospitals, thousands of extra ventilators) because of the reliance on this model?

A lot of time, money and effort has been expended based on that model.

These are the numbers New York released on Sunday, April 5.

Here is another way to look at the trend on hospitalizations that was put together by Charlie Bilello. 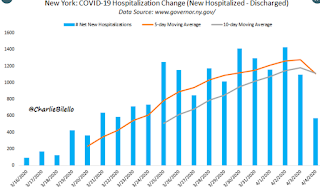 In addition, deaths were +594 compared to +630 yesterday. All numbers were better than the day before including the number of patients discharged from hospitals.

The IHME model projects that maximum hospital peak resources is going to be reached in New York this week on April 9 and the strain on the system will thereafter diminish.

Based on what I am seeing right now, it does not look like we are going to be short 63,000 hospital beds and 9,400 ventilators in New York as the model projects.

My view seems to also be supported by the trend in ER visits to NYC hospitals for influenza-like and pneumonia conditions in the chart below. This would indicate that the peak in hospitalizations is approaching. ER visits have been declining among all age groups in the last week


The IHME model also projects that the daily death total in New York will peak this week on April 10 with 855 deaths. There were 594 deaths in New York yesterday.

Based on the 3-day rolling growth rates I have calculated, I think the expected the number of deaths on April 10 could be higher than 855. I hope I am wrong. If it stays below that number I think we have definitely turned the corner in New York.

New Jersey also saw a large reduction in deaths over the last day. Is this an aberration or an indication that things are getting better? This week should give us an answer.


The IHME model is projecting that the peak in use of hospital resources will not be reached until April 15 nationally. It is also projects that April 16 will be the day that peak deaths for the nation are reached.

New York might reach a peak this week but it looks like it may be another week until we make the turn for the nation at large.

This is the reason why President Trump said this last week.


As I have written earlier, the only thing that has seen greater exponential growth than the virus is the negative effects it has had on the economy.

Another couple of examples from last week. Unfortunately, these are deep valleys rather than peaks.

Year over year change in traffic in retail stores.

How close can you get to losing 100% of your business in the course of a few weeks? 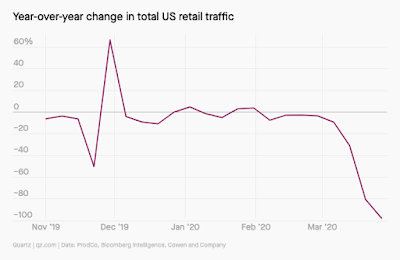 I am actually surprised this is not worse. 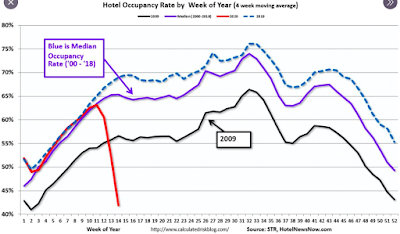 I am all for reversing what is going on.

Let's turn the virus peaks into large valleys and the economic valleys into peaks that become high plateaus.

The sooner the better.

Another interesting sight I saw today that says a lot about where we are right now.

This is a picture of the drive-thru at the nearest Starbucks to my house (the Starbucks is on the other side of the small strip center from the Panera you see in the foreground). There was a long line of cars wrapped around the building. I counted 18 cars in line at 300pm in afternoon. This is during a stay-at-home order. I guess coffee in the middle of the afternoon is an essential item. 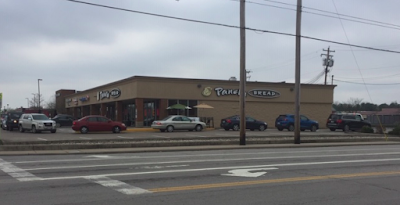 This is the picture of the drive-thru at the closest Covid-19 testing center to my house at 1000am on Thursday. Not one car in sight. 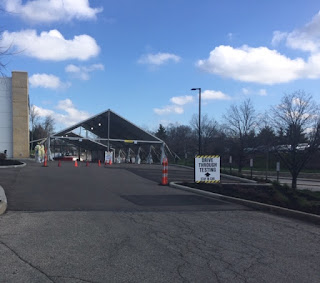 Based on the news reports, you would think the lines at these drive-thrus would be reversed wouldn't you?