What If It Has Been Here Since November?

What if the first case of Covid-19 did not appear in the United States in January?

What if it had actually first start infecting people in late November/early December of last year?

What if we are really in what might be considered a second wave of the virus?

What if there is much more herd immunity in the population than we realize?

What if, as a result, we could get back to normal much sooner than most would expect?

These are questions that an increasing number of people are asking.

Those questions are also supported by an increasing amount of data.

Researchers at Stanford have started conducting anti-body tests of 3,200 people in the San Francisco Bay Area to attempt to answer some of those questions. The results of their research will not be available for several weeks but many are interested in their findings.

Their work might shed some light on also answering the question as to why California has seen much lower confirmed cases and deaths from Covid-19 than New York despite its much larger population.

The differences in these numbers are astounding. On a per capita basis New York has 18x more cases and 29x more deaths than California.

It is even more incredible when it is considered that California sees much more travel from China (the origin of the virus) than New York.

Could President Trump's early travel ban from China, compared to the later shutdown of flights from Europe, have had that much effect? Could the fact that California started its shelter-in-place order two days before New York made that much difference?

Or is this all a result of the virus invading California much earlier? Could the virus have been slowly infecting people for several months before anyone knew it? Could this then allowed for a certain amount of herd immunity to develop in the community as a result?

We now know that the Chinese were aware of the virus as early as mid-November, 2019. However, China did not release the RNA sequence required to develop a test until January 12, 2020---nearly two months later.

However, what if the virus had been present in the United States without anyone knowing it simply because there was no test to identify it?  The reality is that this could have been the case for up to two months before the test was developed

We do know that there were a large number of people in the United States who sought medical attention with flu-like illness beginning in early December.

This is the CDC chart on the percentage of visits made for Influenza-like illnesses for the current flu season compared to other years. Note the tremendous increase in visits in late November/early December.


We also know that a large portion of these people tested negative for the flu. Could a significant number of them have had Covid-19?

The chart below shows that dramatic increase in flu-like cases nationally beginning around December 1 compared to the two previous years without a corresponding positive test for the flu. This chart subtracts positive tests for the flu from the ILI visits.

In fact, it shows that in the week of December 30 there were over twice as many such cases of flu-like illnesses (without a confirming test) as had been seen in the previous two years. 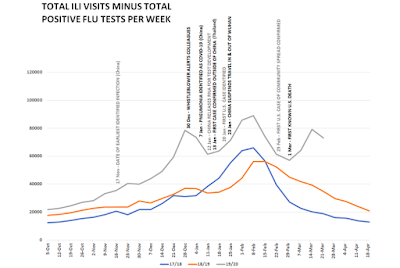 In fact, there were an additional 120,000 such cases in the month of December alone compared to the two previous years. Coincidentally, this about the same number of Covid-19 cases that were confirmed in the United States between February 28 and March 28.

It also stands to reason that a large percentage of these cases were on the West Coast because of the large amount of air traffic between China and cities like Los Angeles, San Francisco and Seattle.

A.J. Kay developed the chart above and wrote an article on this subject entitled "The Curve Is Already Flat"  and explains it this way.

The number of positive seasonal flu tests is relatively small in comparison to total ILI visits. That is, most cases of ILI visits in any given year remain unexplained by the flu. However, this year was unique in both the sheer volume of unexplained ILI visits and the early date that the surge of visits began.

Even 2017–18, the most deadly flu season in four decades, did not produce either the volume or the extended duration of ILI visits that year that we have seen over the past 6 months.

Subtracting the weekly positive seasonal flu tests from the total number of ILI visits for each year reveals that in late 2019, tens of thousands of Americans per week were complaining of a mysterious, unidentified illness that acts enough like the flu to be included in flu surveillance data.


Kay is one who believes that many more have been infected by the virus than we know and that herd immunity is a factor in California's lower infection rates and deaths.

Recent tests in Germany of people in the city at the epicenter of the epidemic in that country suggest that as many as 15 per cent may already have immunity – three times as many as previous estimates.

This was cited as a reason that the lockdown may be lifted sooner than expected in that country.

That higher infection rate also suggests that the death rate from the virus is five times lower (.37%) than previously thought.

One of the more interesting stories that I saw on this subject last week was about a study in Massachusetts that had analyzed wastewater at a treatment plant for a large metropolitan city in the state and found evidence of higher levels of the virus in the population than is being reported.

Earlier this week, researchers at the lab in Somerfield announced initial findings from an unidentified "large metropolitan area" in Massachusetts, over a week in late March, indicating the spread of COVID-19 may be exponentially higher than has been reported.

Based on wastewater data, Biobot gave an estimate of anywhere from 2,300 to over 115,000 infected persons within the area sampled, though only 446 cases in the area had been reported. While the estimate had a very wide range, it was the discovery that there were likely many more infected people than revealed by numbers based on COVID-19 clinical testing alone that set off alarms.


Why is this important?

The more people who have been infected (and recovered or had the virus but never knew it) the less chance that the virus can be passed on to others. This is referred to as "herd immunity".


The R0 is what public health experts refer to as the contagiousness of the disease. The higher the R0 the more likely it is to be passed to someone. The seasonal flu has an R0 of about 1.5. It is thought that Covid-19 is in the 2.0 to 3.0 range. This is the number of other people the average infected person will transmit the disease to others.

Compare the R0 on various diseases and you will see that Covid-19, while more contagious than seasonal flu, is less infectious than a host of other diseases that have plagued mankind through the years.

These are the R0 values for diseases on a population that has not been previously exposed to the disease.

However, the R0 decreases as more and more people establish immunity.

If 50%-60% of people in a population have immunity to a disease with an R0 of 2-3, it will be eradicated. It will have no way to continue to duplicate.

Therefore, it also follows that if we find that more people have been exposed to the virus that also means that there is less chance it can continue to spread.

This is why if we find Covid-19 has been around since November, rather than January, it will be a significant finding.

If studies show that many more people have been exposed to Covid-19 than is now believed this could also be an important factor in deciding when to open up the economy.

I have no doubt that President Trump will be pushing his public health experts for this data as the decision on opening the economy looms in the coming days and weeks.
Posted by BeeLine at 6:40 PM